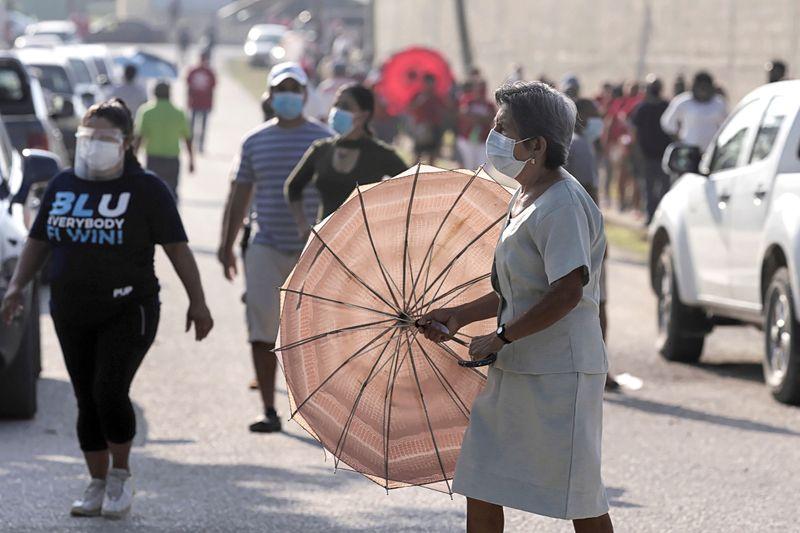 BELIZE CITY (Reuters) - Belizeans headed to the polls on Wednesday to replace a veteran prime minister, with many in the tiny Central American country saying they were ready for change to repair an economy battered by pandemic-driven shutdowns.

Dean Barrow, the outgoing prime minister, ran Belize for more than a dozen years. His conservative United Democratic Party (UDP) is now in the hands of Patrick Faber, who is battling its traditional center-left adversary, the People's United Party (PUP), to secure a fourth consecutive UDP term in office.

Faber faces a tough contest against PUP leader Johnny Briceno, a former deputy prime minister, with discontent widespread over an economy that was in the doldrums long before the coronavirus decimated tourism, the main driver of prosperity.

"The economy is in free fall; more now than ever with the pandemic, we need to move towards a more self-sustainable Belize," said Casiana Lind, 23, in Cayo District in western Belize, who said she planned to vote for the PUP.

The Caribbean country's economy shrank on an annual basis in every quarter from April-June last year through to the second quarter of 2020, the latest period for which data is available, according to government statistics.

"The UDP has been in power for a long time," Marvin Virula, 34, said after voting in the Cayo District. "The youth want to see a change."

Polls opened at 7 a.m. (1300 GMT) and will close at 6 p.m. Voters wore face masks, which are mandatory in public with hefty fines for anyone caught not wearing one.

An election-night curfew takes effect at 8 p.m. but people in line at that time will be allowed to cast their ballots, police said.

Results will roll in overnight with an announcement of the winner expected early on Thursday.

The prolonged downturn has left many voters in Belize, which has a population of just 400,000, fighting poverty. The main international airport only reopened last month, giving little time for the economy to recover ahead of the election.

Scandals and graft allegations have taken the shine off Barrow's record, and grumbling about nepotism has been fed by the fact his sister is running to succeed him in parliament. A son, a former convict, is also on the UDP ticket.

Briceno told Reuters on Wednesday he and others in the party were feeling "energized" and that he believed young voters were flocking to the party.

"People are sick and tired of the corruption and the infighting and the arrogance of the UDP," he said.

Reliable polls are few and far between in the former British colony, making the outcome of the vote hard to predict.