By Andrei Makhovsky MINSK (Reuters) - Belarusian opposition leader Svetlana Tikhanouskaya said on Tuesday she had fled abroad for the sake of her children after strongman leader Alexander Lukashenko's claim of victory in Sunday's presidential election prompted bloody street protests. At least one person died during two nights of clashes between security forces and opposition supporters who accuse Lukashenko, in power since 1994, of rigging his re-election 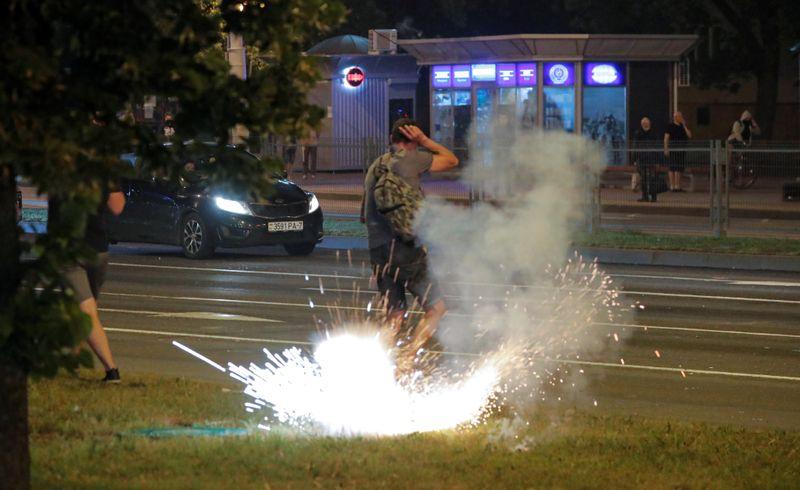 At least one person died during two nights of clashes between security forces and opposition supporters who accuse Lukashenko, in power since 1994, of rigging his re-election. Western nations have also branded the vote as unfair and unfree.

Belarus's interior ministry said more than 2,000 people had been detained after the clashes on Monday night, in which it said 21 police and security service personnel had been injured, with five taken to hospital.

Tikhanouskaya, a 37-year-old former English teacher who took her husband's place on the ballot after he was jailed, fled to neighbouring Lithuania from where she urged her compatriots not to oppose the police and to avoid putting their lives in danger.

"You know, I thought that this whole campaign had really toughened me up and given me so much strength that I could handle anything," she said in an emotional video.

"But, probably, I'm still the weak woman I was in the first place. I have made a very difficult decision for myself," she said, adding that the political tumult in Belarus was not worth anyone losing their life for.

"Children are the main thing in life," said Tikhanouskaya.

Although Syarhei, her husband, an anti-government blogger, remains in jail in Belarus, she was reunited with her children in Lithuania whom she had earlier moved abroad after receiving anonymous threats about their safety.

The mood on the streets of Minsk was calmer during the daytime on Tuesday, but a Reuters reporter saw riot police parked outside several factories in Minsk amid calls on anti-Lukashenko social media channels for a general strike.

People laid flowers at the site in central Minsk where the protester died in Monday's clashes.

Lukashenko has compared the protesters to criminal gangs and dangerous revolutionaries with shadowy foreign backers. State media on Tuesday showed detained young men with their hands behind their backs, calling them "Russian provocateurs".

Belarus has strained relations with Moscow, though President Vladimir Putin used a congratulatory telegram to nudge Lukashenko to accept closer ties. Lukashenko has long accused Russia of aiming to swallow up his nation of 9.5 million people.

"She apparently faced certain pressure and did not have much choice but to leave the country," he told a news conference.

"Apparently, the other choice was not compatible with freedom, so she needed to take the offered possibility to leave the country, and used it," he said.

Lithuania had given her a one-year visa and a place to stay, he added, saying it would ensure her safety.

Official results in Sunday's election gave her only around 10% of the vote compared to Lukashenko's 80%. But she and her supporters said the ballot was rigged and that she was the real winner.

Belarusian authorities said she was not forced to leave the country but a separate video appearance, apparently filmed at the central election commission before she left Belarus, raised questions about her departure.

In it, she was seen reading from a piece of paper in stilted official language and reversed her earlier stance and asked supporters to accept the election's outcome and stop protesting in order to prevent bloodshed.

It was unclear if the video had been made under duress or as part of a deal allowing her to leave the country.

U.S. Secretary of State Mike Pompeo said Belarus's election was "not free and fair" and condemned "ongoing violence against protesters and the detention of opposition supporters".

The European Union said on Tuesday its relationship with Belarus was under review, though it declined to comment on whether sanctions would be reimposed on the country.

Foreign observers have not judged an election to be free and fair in Belarus since 1995, and the run-up to this month's vote saw authorities jail Lukashenko's rivals and open criminal investigations of others who voiced opposition.

Tikhanouskaya's campaign rallies drew some of the biggest crowds since the fall of the Soviet Union in 1991.