Belarusian activist to press fight against Lukashenko with opposition leader

By Joanna Plucinska WARSAW (Reuters) - Belarusian activist Veronika Tsepkalo plans to meet opposition leader Sviatlana Tsikhanouskaya in Lithuania to discuss their next steps towards ousting President Alexander Lukashenko, but she indicated she would not return to her country soon. Tsepkalo also said it could take 'some time' for the movement against Lukashenko, who has ruled Belarus for 26 years and has faced mass protests since an election widely viewed as rigged, to succeed in its aims. Tsepkalo fled Belarus for neighbouring Poland after the Aug. 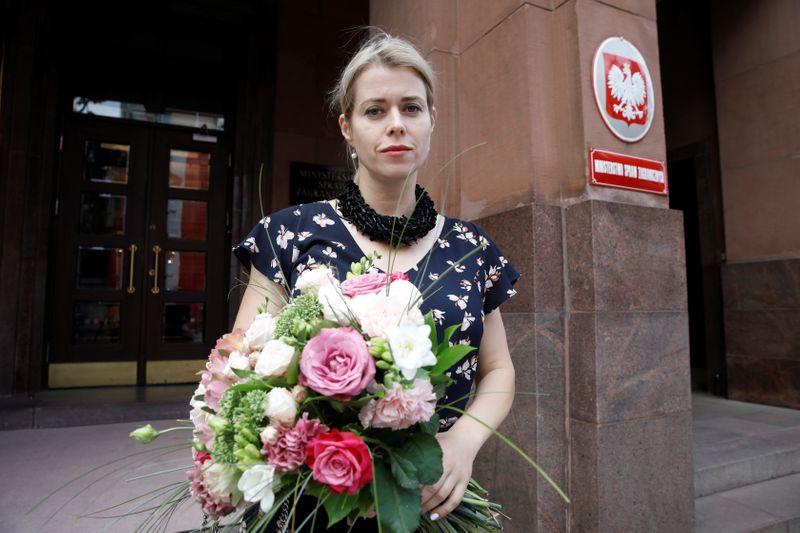 WARSAW (Reuters) - Belarusian activist Veronika Tsepkalo plans to meet opposition leader Sviatlana Tsikhanouskaya in Lithuania to discuss their next steps towards ousting President Alexander Lukashenko, but she indicated she would not return to her country soon.

Tsepkalo also said it could take "some time" for the movement against Lukashenko, who has ruled Belarus for 26 years and has faced mass protests since an election widely viewed as rigged, to succeed in its aims.

Tsepkalo fled Belarus for neighbouring Poland after the Aug. 9 election upon receiving threats from the government that she would be arrested.

She was reunited with her husband, Valery Tsepkalo, a former ambassador to Washington, who was barred from running in the election and fled to Russia with their two sons before the vote.

Tsikhanouskaya, a 37-year-old former English teacher, took the place of her own activist husband on the ballot after he was jailed. She has fled to neighbouring Lithuania.

Speaking to Reuters in Warsaw on Wednesday, Tsepkalo said: "The only legitimate president is Sviatlana Tsikhanouskaya. Our main target, our main aim is just to make Lukashenko go."

Tsepkalo said she was looking forward to talks with Tsikhanouskaya in the coming days.

"I would like to sit down with Sviatlana and discuss the next steps. Discuss what we are going to do in the near future because we understand the movement which we started, it will be continued for some time."

But she indicated she would not herself return to Belarus soon as she feared being arrested.

"I wish I could go back to Belarus as soon as possible but at the same time I understand the chances of me getting to the jail are very, very high," she said.

"If I'm back (in jail) it means my husband will not be able to speak up to the international community anymore."

On Wednesday, the European Union held an emergency summit on the crisis, rejecting Lukashenko's re-election and announcing financial sanctions against officials the EU blames for election fraud and a crackdown on protests.

Tsepkalo will spend a few days in Warsaw with her family and meeting Polish officials and civil society leaders in an effort to bolster support for the Belarusian protesters before moving on to Lithuania.

On Wednesday, she and her husband met Polish Foreign Minister Jacek Czaputowicz and will on Thursday meet Senate Speaker Tomasz Grodzki.

After the meeting with Czaputowicz, Valery Tsepkalo said he had discussed setting up a Polish-U.S. fund with officials to support Belarusian civil society financially and legally, in particular those who had been wounded in the protests or had lost their jobs.

"It's very important for the ordinary people to understand that they would not be left by themselves (with) their problems," he told Reuters.