By Andrei Makhovsky MINSK (Reuters) - The nascent political opposition in Belarus set up a council inside the country on Tuesday, a move President Alexander Lukashenko denounced as an attempt to seize power 10 days after an election that has triggered mass demonstrations. Many of Belarus's major opposition figures are either in jail or in exile, including presidential candidate Sviatlana Tsikhanouskaya, who fled the country after the vote her supporters say she won. Thousands of protesters have taken to the streets, braving a crackdown by the authorities, to demand Lukashenko resign. 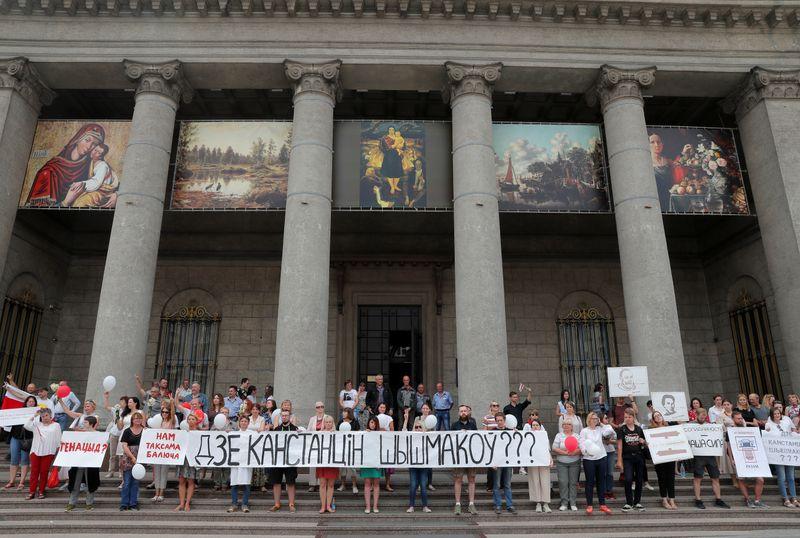 MINSK (Reuters) - The nascent political opposition in Belarus set up a council inside the country on Tuesday, a move President Alexander Lukashenko denounced as an attempt to seize power 10 days after an election that has triggered mass demonstrations.

Many of Belarus's major opposition figures are either in jail or in exile, including presidential candidate Sviatlana Tsikhanouskaya, who fled the country after the vote her supporters say she won.

Thousands of protesters have taken to the streets, braving a crackdown by the authorities, to demand Lukashenko resign.

Olga Kovalkova, Tsikhanouskaya's representative at a press conference to launch the new opposition council, said she expected Tsikhanouskaya would soon return to Minsk, to act as a guarantor in a negotiated transition of power.

"We are operating solely through legal means," Kovalkova said. "The situation is critical. The authorities have no choice but to come to dialogue. The situation will only get worse."

Earlier, in televised remarks to his Security Council of top brass, Lukashenko described the planned opposition council as "an attempt to seize power" and promised "appropriate measures".

Since official results declared him the election winner with 80% of the vote, Lukashenko seems to have underestimated the strength of public anger in a country suffering economic hardship and a coronavirus epidemic that he has dismissed. At least two protesters have been killed and thousands detained.

There have been increasing signs that the burly former Soviet collective farm boss is losing his grip on the country he has ruled for 26 years, with workers going on strike at state factories long seen as bastions of his support.

After videos appeared on the internet showing some police officers throwing their uniforms into dustbins, the Interior Ministry acknowledged on Tuesday that some police had quit.

"We will not judge the small proportion of police officers who have today left the service out of personal convictions," it said in a statement. It pleaded for others to stay at their post, saying the public would be left unprotected if "the entire police force today takes off its badges".

Earlier on Tuesday, Lukashenko awarded medals "for impeccable service" to law enforcement officials who have helped crack down on protesters.

Among senior figures to speak against the government was Pavel Latushko, who served as ambassador to Poland, France and Spain under Lukashenko before becoming head of the country's most prestigious state theatre last year. He was sacked after expressing outrage at the abuse of detained protesters.

"In the life of every person there comes a line that cannot be crossed," he told Reuters on Tuesday in Minsk. "That moment came for me when I saw people coming out of prisons, talking about the violence against them. I became ashamed."

The entire troupe of actors resigned en masse on Tuesday in solidarity at Latushko's Janka Kupala National Theatre, where Culture Minister Yuri Bondar met them on stage. One by one, the actors slammed down a resignation letter and shouted "go away". Hundreds of protesters outside cheered as the actors emerged.

Tsikhanouskaya, a 37-year-old political novice who emerged as an unexpected consensus opposition candidate after better-known figures including her activist husband were jailed or barred from standing in the election, has issued calls via the internet to followers to rise up but remain peaceful.

"All of this outrageous, unfair lawlessness shows us how this rotten system works, where one person controls everything," Tsikhanouskaya said in a video on Tuesday. "One man has kept the country in fear for 26 years."

For his part, Lukashenko says the protests are being stirred up from abroad. The official Belta news agency released a video calling protesters "bought-and-sold scum, prepared to sell their own mothers for $20". Lukashenko told his Security Council that the army had gone on full alert at the western borders, describing "internal problems" as part of an external threat.

Attention is firmly focused on how Russia will respond to the biggest political crisis facing an ex-Soviet neighbour since 2014 in Ukraine, when Moscow intervened militarily after a friendly leader was toppled by public protests.

Culturally, politically and economically, Belarus is the ex-Soviet republic with the closest ties to Russia, including a treaty that proclaims a "union state" of the two countries with a Soviet-style red flag. But Russia's President Vladimir Putin and Lukashenko have had a difficult personal relationship.

The EU is gearing up to impose new sanctions on Belarus officials. European diplomats say the situation in Belarus is different from Ukraine's six years ago, in part because the Belarus opposition is not necessarily seeking to loosen ties with Russia, merely to get rid of Lukashenko.