By Andrei Makhovsky MINSK (Reuters) - Belarus opposition leader Sviatlana Tsikhanouskaya on Friday called for new protests and an election recount, piling pressure on strongman president Alexander Lukashenko as he faces the biggest challenge in his 26 years in power. In a video posted on YouTube from self-imposed exile in Lithuania, Tsikhanouskaya asked supporters to demand an official investigation into allegations that Lukashenko had rigged last Sunday's presidential election 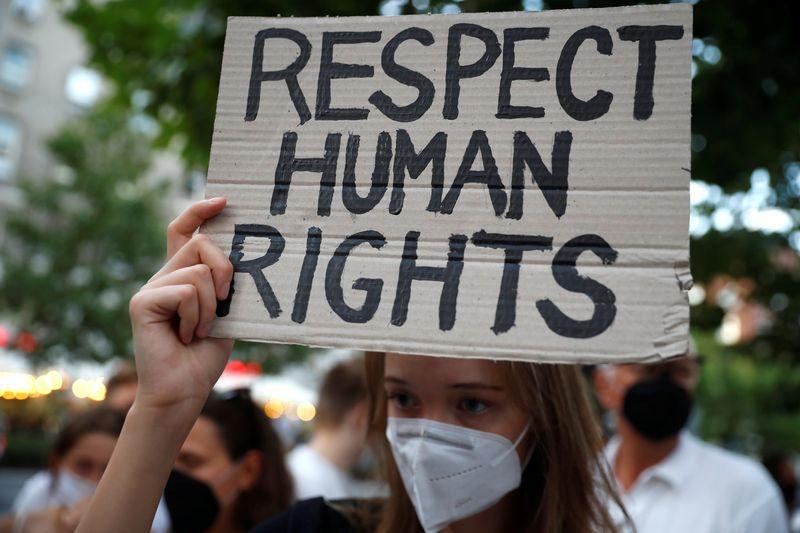 MINSK (Reuters) - Belarus opposition leader Sviatlana Tsikhanouskaya on Friday called for new protests and an election recount, piling pressure on strongman president Alexander Lukashenko as he faces the biggest challenge in his 26 years in power.

In a video posted on YouTube from self-imposed exile in Lithuania, Tsikhanouskaya asked supporters to demand an official investigation into allegations that Lukashenko had rigged last Sunday's presidential election.

At least two protesters were killed and thousands detained in a violent crackdown this week, prompting the European Union to consider new sanctions on Belarus, which is seen by Russia as a strategic buffer against NATO and the EU.

"Belarusians will never again want to live with the old authorities," Tsikhanouskaya said. "Let's defend our choice. Don't stay on the sidelines. Our voices need to be heard."

Tens of thousands of people took to the streets for a sixth consecutive day demanding that Lukashenko step down, joined by workers at some of the state-owned industrial plants that are the centrepiece of his Soviet-style economic model.

One teacher trembled and wept quietly as she held up flowers outside the State Philharmonic concert hall, along with a placard reading "I'm a teacher, and I want to be proud of that!".

In a rare climbdown, the government apologised for the use of force as it freed more than 2,000 protesters from detention.

"We need additional sanctions against those who violated democratic values or abused human rights in Belarus. I am confident today's EU Foreign Ministers' discussion will demonstrate our strong support for the rights of the people in Belarus to fundamental freedoms and democracy."

Belarus Foreign Minister Vladimir Makei told his Swiss counterpart in a call that Minsk was ready for "constructive and objective dialogue with foreign partners" about issues related to the election, the state news agency BelTA reported.

Russia, which has nudged Lukashenko into accepting closer political and economic ties, this week expressed concern over what it depicted as attempts by external forces to destabilise Belarus.

Lukashenko, a 65-year-old former Soviet collective farm manager, has faced increasing anger over his handling of the coronavirus

pandemic - which he dismissed as a "psychosis" - as well as a sluggish economy and civil rights.

But even sections of society normally seen as loyal have begun to dare to show dissent.

Several television presenters and journalists from the tightly controlled state media resigned this week in solidarity with the protesters.

And thousands protested on Friday at the Minsk Automobile Plant (MAZ, which makes ‎trucks‎ and ‎buses, chanting "Shame on you!" and "Go!", echoing the unrest seen at several major plants this week.

Tsikhanouskaya, a 37-year-old former English teacher, emerged from obscurity a few weeks ago to take her husband's place in the election campaign after he was jailed, and has now led some of the biggest protests against Lukashenko since he came to power with the fall of the Soviet Union.

Shortly after the election, she fled to Lithuania, saying it was for the sake of her children.

Lukashenko has alleged a foreign-backed plot to destabilise Belarus and dismissed the demonstrators as criminals and people without work.

"It's the same choice (President Bashar al-) Assad faced in Syria - either you recognise the end is nigh or you go for more violence against your own people," one EU official said, speaking on condition of anonymity.