Beijing: The search for culprits behind the rancid haze enveloping China's capital has turned a spotlight on the country's two largest oil companies and their resistance to tougher fuel standards.

Bureaucratic fighting between the environment ministry on the one hand and China National Petroleum Corp (CNPC) and Sinopec Group on the other has thwarted stricter emission standards for diesel trucks and buses — a main cause of air pollution blanketing dozens of China's cities. 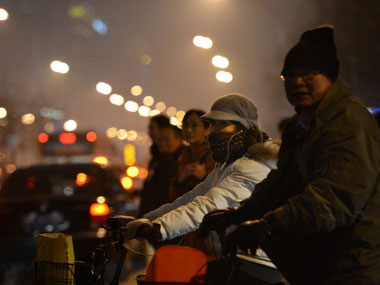 To be sure, many sources contribute to air pollution levels that hit records in January, but analysts say the oil companies' foot-dragging and disregard of environmental regulations underscore a critical challenge facing a toothless environment ministry in its mission to curb air pollution.

With widespread and rising public anger changing the political calculus, it also poses a broader question of whether the incoming administration led by Communist Party chief Xi Jinping will stand up to powerful vested interests in a country where state-owned enterprises have long trumped certain ministries in the quest for economic growth at all costs.

"I think the Communist Party's new government should weaken CNPC and Sinopec," said Wang Yukai, a professor from the National School of Administration. "These interest groups have too much power."

Delays in implementing stricter emission standards are rooted in money — chiefly, who should pay for the price of refining cleaner fuels? By some estimates, auto emissions contribute as much as a quarter of the most dangerous particles in Beijing's air.

To supply cleaner diesel, the oil firms must invest tens of billions of yuan (billions of dollars) to remove the sulfur content, said Xiaoyi Mu, a senior lecturer in energy economics at the University of Dundee in Scotland.

PetroChina, the listed arm of CNPC, said in a statement sent to Reuters that all automotive diesel produced by PetroChina in 2012 met existing Chinese emissions standards.

Sinopec did not respond to repeated phone calls from Reuters seeking comment.

Sinopec chairman Fu Chengyu, quoted in state news agency Xinhua last week, acknowledged that China's refineries are one of the main parties that should bear responsibility for air pollution. Even so, he added that was not because fuel failed to meet standards but rather because fuel standards were not sufficient.

The bureaucratic tug-of-war has been going on for years.

In unequivocal statements, he sought to lay down the law: The ministry was not going to further delay the cleaner China IV emission standard for trucks and buses, despite reluctance by CNPC and Sinopec to supply the fuel that would cost more to produce.

"If the sulfur content in your oil is too high and does not meet the standards, and if cars break down, it'll be your responsibility. The environment ministry will have nothing to do with it," Zhang said, according to Tang Dagang, director of the Vehicle Emission Control Center, who was present at the meeting.

The officials from the oil companies responded by promising to supply the cleaner fuel after the Lunar New Year in 2012, a traditional holiday that fell in January that year.

But a few months later, a spot check by the environment ministry showed the companies were still supplying ordinary diesel, said Tang, whose policy research group is affiliated with the ministry.

With media focusing on a sudden worsening of the air quality in Beijing at the start of 2013 -- 21 days in January recorded "heavily polluted" levels or worse — urban residents are increasingly impatient with the political wrangling.

"The air pollution is terrible," said Beijing resident Zhang Shuqing on a recent very polluted day. "They need to sort it out, the department responsible needs to sort out the environment."

The environment ministry, however, faces formidable odds in the face of China's complex bureaucracy and weak enforcement of laws.

At least 10 government entities such as the powerful National Development and Reform Commission (NDRC) and the Ministry of Industry and Information Technology (MIIT) shape policies that affect the environment.

Unlike the U.S. Environmental Protection Agency, the environment ministry has no power to set fuel emission standards, and sometimes it is not even consulted on decisions taken by other government departments that would affect the environment.

For example, when the MIIT and the NDRC held a meeting to deliberate on a policy subsidizing energy-saving cars, they never contacted the environment ministry, said Ding Yan, deputy director of the Vehicle Emissions Control Center. As it turns out, some of these cars are actually relatively heavy polluters.

In 2008, China promoted the State Environmental Protection Administration to a full ministry in a bid to give it more weight in the country's fight against pollution.

Yet the ministry still lacks the authority to force big state-owned enterprises and local governments to toe the line. The ministry did not respond to a request for comment.

THE COST OF CLEAN AIR

Excessive pollution levels have already prompted the Beijing government to roll out a series of temporary emergency measures such as shutting down 103 heavily polluting factories and taking 30 percent of government vehicles off roads, but the capital's air has remained hazardous.

It remains unclear whether Xi will restrain the influence of the oil firms, but with public anger rising, and with a normally compliant media joining in the calls for action, political pressure is growing.

The problem for oil firms such as PetroChina, the listed arm of CNPC, and Sinopec is that central planners set prices at the pump, even when global energy costs remain high.

Tang said both CNPC and Sinopec have told the environment ministry that they would have supplied the fuels "if they had gotten a reasonable price".

Jiang Kejun, research professor at the NDRC's Energy Research Institute, says it is unreasonable to demand that CNPC and Sinopec bear the cost of refining cleaner fuels.

"I'm an environmentalist and I also hate the actions of CNPC and Sinopec," Jiang said. "But we have to tell the public: energy prices will rise significantly. To enjoy both low energy prices and also fresh air, there's no way you can have both."

With no supply of cleaner diesel fuel, Beijing had to delay the implementation of the China IV emission standard for diesel trucks and buses twice -- first in 2011 and then later in 2012, when it was extended to this July.

The new standard aims to cut emissions of particulate matter and nitrogen oxides -- two key components of urban smog -- from trucks and buses by 80 percent and 30 percent, respectively, said Vance Wagner, a senior researcher at the International Council on Clean Transportation.

"Diesel vehicles, especially trucks and buses, are a disproportionately large source of emissions," Wagner said in emailed comments. He cited environment ministry data that showed large trucks comprise only about 5 percent of China's vehicle fleet, but emit over 60 percent of particulate matter emissions.

In response, China's finance ministry has stepped in to negotiate preferential tax policies with the oil firms to help offset the higher costs of producing cleaner diesel fuel, say people close to the environment ministry.

Chinese media reported last week that new cleaner diesel fuel standards, similar to Euro IV standards that restrict sulfur content, could be issued soon in addition to the existing emissions standards. Even the new requirements, however, could give oil companies a two-year window for full compliance.

Without intervention at a higher level, the delays are likely to go on.

Yue Xin, head of the vehicle fuels and emissions lab at the Chinese Research Academy of Environmental Sciences, has spent more than three years sparring with CNPC and Sinopec on a committee that sets fuel standards.

Yue is one of two members representing the environment ministry on the panel while about 70 percent of the representatives are from the oil firms.

Now, Yue, whose group is affiliated with the environment ministry, is lobbying for the oil firms to put "detergents" in its gasoline, which will burn fuel cleanly.

The oil firms oppose it because of the costs, Yue said.