By Anna Valderrama MADRID (Reuters) - A detained Catalan leader has called on Spain to come up with new proposals to resolve the dispute over the region's status, and said fellow separatists will not necessarily insist on an immediate independence vote, in an apparent concession. Jordi Sanchez appealed to Spain's Prime Minister Pedro Sanchez, who has said he is open to a referendum on greater autonomy and has promised to lay out detailed plans in parliament on Dec. 12 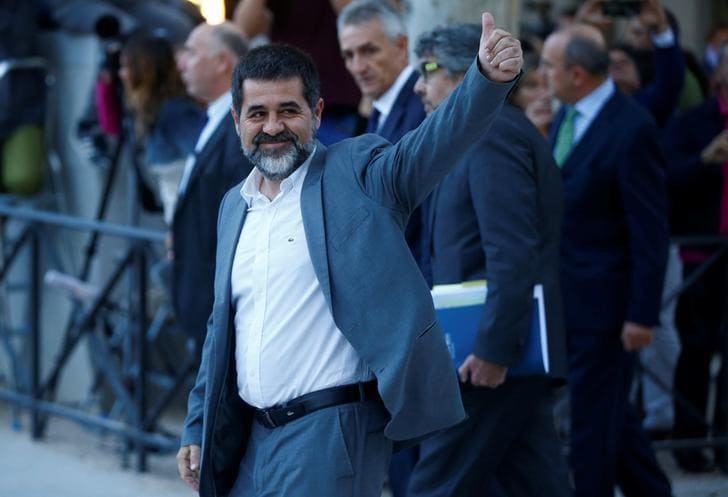 MADRID (Reuters) - A detained Catalan leader has called on Spain to come up with new proposals to resolve the dispute over the region's status, and said fellow separatists will not necessarily insist on an immediate independence vote, in an apparent concession.

Jordi Sanchez appealed to Spain's Prime Minister Pedro Sanchez, who has said he is open to a referendum on greater autonomy and has promised to lay out detailed plans in parliament on Dec. 12.

"We say to Pedro Sanchez: propose what you want but propose something," Jordi Sanchez told Reuters last week, speaking from behind a glass barrier at the Lledoners penitentiary centre near Barcelona.

"We urge him to be brave and make a decision to solve this conflict ... Without a referendum, independence is not possible, but we are willing to consider options that can eventually lead to that goal," he said.

Catalan separatists had previously insisted they would not compromise on a solution that fell short of a referendum. Sanchez's political overture could pave the way for a renewed dialogue between the central and regional governments.

Part of the interview with Jordi Sanchez, one of the most influential voices within the separatist movement, was conducted through written questions and answers.

A former leader of the Catalan National Assembly grassroots movement, Sanchez was elected earlier this year to the regional parliament and was a candidate to become the region's leader. He has since then stepped down after a judge prevented him from attending the parliamentary sessions.

Madrid imposed direct rule on the wealthy northeastern region in October 2017 after it declared its independence on the basis of a referendum that Spanish courts ruled was unconstitutional.

Jordi Sanchez and eight other Catalan politicians were jailed without bail for their role in that secession drive, and remain in custody pending their Supreme Court trial on charges including rebellion and misuse of public funds.

Prime Minister Pedro Sanchez has offered dialogue to Catalonia since toppling his more hardline predecessor Mariano Rajoy in June, but he still opposes independence for a region responsible for a fifth of the output from the euro zone's fourth largest economy.

Tensions over the status of the region are one of the thorniest issues facing the premier, who controls fewer than a quarter of seats in parliament.

Financial controls imposed by Rajoy on the heavily-indebted region after the independence declaration were lifted in June, and the new Socialist government agreed to move jailed leaders including Jordi Sanchez to Lledoners from prisons in Madrid, hundreds of miles (kilometres) from their families.

Supporters of independence hung their striped regional flag and yellow ribbons symbolising their cause outside the detention centre.

Sanchez said he was convinced he would not get a fair trial in Spain, but had no regrets and remained firmly in favour of an independent Catalan state.

If Catalans were to vote against independence, Sanchez said he and his allies would commit to suspending their campaign for a period of time. If they voted in favour, citizens of the new state could have dual nationality, and Spanish - rather than Catalan - could remain its official language, he added.

"History shows that everything is impossible until it ceases to be so," Jordi Sanchez said. "The referendum will be possible sooner or later."