By Ahmed Aboulenein (Reuters) - Iraq's Prime Minister Mustafa al-Kadhimi had just embarked on a state visit to Washington when gunmen shot dead the young protest leader Reham Yacoub in her car in Basra on Wednesday. 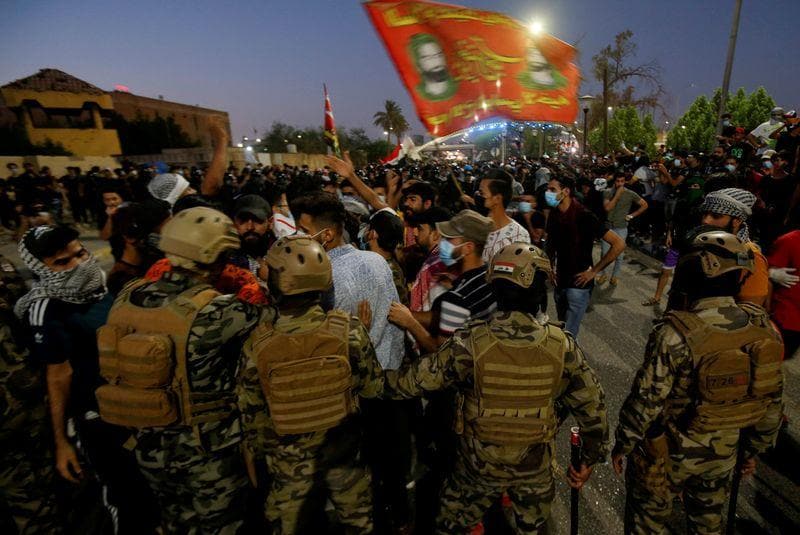 (Reuters) - Iraq's Prime Minister Mustafa al-Kadhimi had just embarked on a state visit to Washington when gunmen shot dead the young protest leader Reham Yacoub in her car in Basra on Wednesday.

Yacoub, 29, was an outspoken critic of the Iran-backed militias whose power and influence Kadhimi has been trying to rein in since taking office in May.

The attack was the third on activists in the southern city in a week. Tahseen Oussama, 30, was gunned down on Aug. 14 and four others were shot at while together in a car Monday.

Her killing cast a pall over the prime minister's trip to the United States. The violence reignited anti-government protests in Basra and the U.S. State Department publicly urged Kadhimi to hold the militias accountable, just two days after he sacked the Basra police and national security chiefs and formed a special committee to investigate the attacks.

"The reality is the PM and his team are unable to control these groups," said Renad Mansour, director of the Iraq Initiative at Chatham House. "Removing a police chief ... is not even scratching the surface of the problem."

Kadhemi's visit was intended to cement U.S. support for his government and while he was there, five U.S. firms, including Chevron Corp, signed agreements with Iraq aimed at boosting its energy independence from Iran.

"The PM is hoping he can go to the U.S. and sign a bunch of deals and say this is how he can fix things, but it doesn't look good that while you're away young activists are being killed by militias and forces under your government," said Mansour.

Most of the militias come under Iraq's Popular Mobilisation Forces, an umbrella grouping of paramilitary forces. Although formally integrated in Iraq's security forces, in practice they operate independently and have resisted all attempts to curb their influence.

Neither do they tolerate any dissent from the population. Yacoub and Oussama were killed two weeks after a national umbrella grouping of activists, to which both belonged, announced it would form a political party to challenge the dominance of militia groups in parliament.

The Basra killings come after Husham al-Hashemi, a well-known security analyst and government advisor, was gunned down outside his Baghdad family home in July by men on a motorbike.

Kadhimi talked tough after Hashemi's killing, pledging to hunt down his assailants and keep the armed groups in check. But there have been few developments since.

His efforts to employ law and order to restrain the groups earlier in the year also backfired.

When Iraqi forces arrested 14 fighters in June for their alleged involvement in rocket attacks on U.S. installations, their comrades drove vehicles into the heavily fortified Green Zone to pressure Kadhimi for their release. All but one were let go.

In May, an arrest raid in Basra on the Iran-aligned Tharallah group, accused of shooting protesters, also failed to result in any prosecutions. In both cases judges cited a lack of evidence.

"The situation in Iraq has devolved to the point that gunmen can roam the streets and shoot well-connected members of civil society with impunity," said Belkis Wille, senior Crisis and Conflict researcher at Human Rights Watch.

"One has to question whether the federal government is even capable of reining in the violence at this point."