By Andy Sullivan WASHINGTON (Reuters) - Attorney General William Barr could have buried Special Counsel Robert Mueller's Russia report deep in the recesses of the U.S. Justice Department and simply told the public that President Donald Trump would not face criminal prosecution. 'These reports are not supposed to be made public,' Barr said at a news conference on Thursday morning before releasing the 448-page report with some information blacked out. 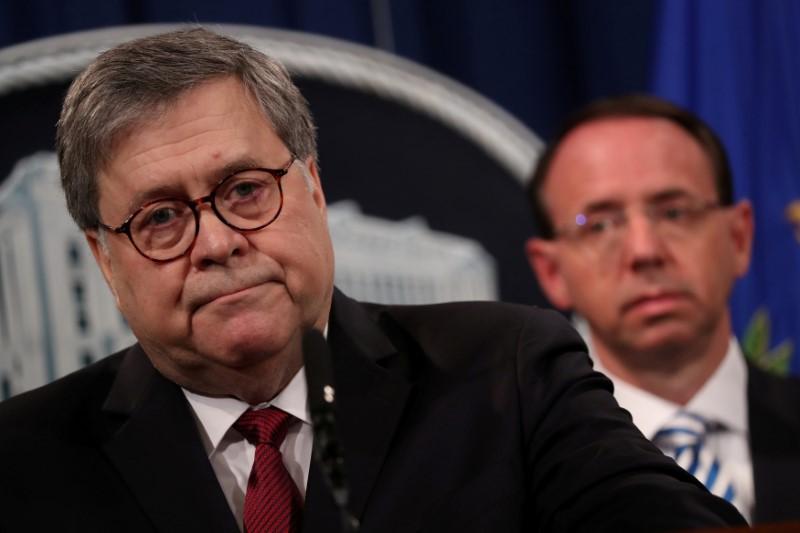 "These reports are not supposed to be made public," Barr said at a news conference on Thursday morning before releasing the 448-page report with some information blacked out.

Barr was following through on a promise he had made months earlier to make as much of Mueller's findings public as possible.

But that opened him up to widespread criticism from Democrats and some legal experts, who questioned his decision not to charge Trump with obstruction of justice, and accused him of acting like the president's personal defense lawyer.

Mueller's report outlined 10 episodes in which Trump tried to get the special counsel fired, limit the scope of his investigation, or otherwise interfere with the probe.

Mueller stopped short of concluding that Trump had committed a crime, but did not exonerate him of wrongdoing either, leaving Barr or Congress the option to take action against the Republican president.

Some experts said Barr should have brought charges.

"To me, they laid out a chargeable obstruction case," said Shanlon Wu, a former federal prosecutor who represented Rick Gates, the former Trump deputy campaign chairman who has pleaded guilty to conspiracy and making false statements and is cooperating with the investigation.

He praised the White House's cooperation with the investigation and said Trump's public and private efforts to interfere with the probe could have been fueled by a "sincere belief" that the investigation was "propelled by his political opponents and fueled by illegal leaks."

At several points, Barr echoed Trump's mantra that Mueller had found "no collusion" with Russia.

To some, it was a disappointing performance from a man who had been praised for upholding the Justice Department's independence during a previous stint as attorney general from 1991 to 1993.

"He's really shown himself to be principally focused on defending the president," said Robert Litt, a former federal prosecutor who had supported Barr's nomination for the job.

A Justice Department official, speaking on condition of anonymity, said Barr did not mislead the public because the White House cooperated with the probe despite Trump's numerous statements criticizing it.

The official also said Mueller had the choice to either recommend charges against Trump or not, and he had decided against it.

Representative Eric Swalwell, one of more than 15 Democrats running for president, called on Barr to resign.

Justice Department officials declined to respond to the resignation demand.

EASY ON THE REDACTIONS

Democrats had worried that Barr might use too heavy a hand when redacting portions of the report that dealt with sensitive material, such as active investigations, confidential legal proceedings and matters of national security.

In the end, only 6 percent of the report was blacked out, according to ProPublica, the nonprofit investigative journalism organization.

"The redactions seemed to me to be reasonable," said Jack Sharman, a lawyer who worked on the impeachment of Democratic President Bill Clinton during the 1990s. "I was a little surprised."

Starting next week, 12 top lawmakers and their staffers will be able to see a more complete version in a secure reading room.

Still, Barr is sure to face pointed questions when he testifies before Congress in May.

Democratic Senator Sheldon Whitehouse, a member of the Senate Judiciary Committee, said he had no reason to believe Barr's redactions were not made "justifiably and in good faith" but he also criticized him for protecting Trump.

"He has over the past few weeks used his office to perform what I consider to be inappropriate PR services for the Trump White House," he said on Friday.

To some in Trump's camp, the criticism directed at Barr is a sign of a job well done.

"Attorney General Barr knew every step of the way that people are going to unload on him today," said Michael Caputo, a former Trump campaign adviser. "He had a role to play and he played it."