A number of people were injured when a van rammed into a crowd of pedestrians on Barcelona's iconic Las Ramblas on Thursday, police said.

US comes to Spain's aid in moments of terror attack

Police confirms one person has died and that 32 people have been injured, 10 of them critical

An image of the van that mowed down people, courtesy Twitter

Map of the route taken by the attackers

All metro and train stations have been closed

Eyewitnesses say people try to use shops as escape route

According to BBC, around 13 people have lost their lives in the Barcelona attack.

Around 17 injured in attack, Catalonia govt says in statement

Around 600 stuck in restaurants near attack site, says restaurant spokesperson

The spokeswoman for a chain of restaurants in the area said that some 600 people were stuck inside their restaurants, waiting for permission from the police to leave, according to The Guardian.

The Foreign Office has updated its travel advice for UK citizens in Barcelona, telling them to avoid Las Ramblas, a report by The Guardian says.

Graffiti against tourists had reportedly appeared in Barcelona

In recent weeks, threatening graffiti against tourists has appeared in different parts of Barcelona, which draws at least 11 million visitors annually. In one video released under the slogan "tourism kills neighbourhoods", several hooded individuals stopped a tourist bus in Barcelona, slashed the tyres and spray-painted the windscreen, NDTV reported.

Authorities are looking for the driver of the van

According to The Independent, police told local news outlets that the two perpetrators may be holed up in a bar after having run from the attack. The driver of the van is reported to have fled on foot and Spanish authorities have warned people to avoid the area. Eyewitnesses reported seeing people running away and screaming after the incident happened.

Police are looking for man who is 1.70 metres tall, wearing a white and blue striped shirt, El Pais reported.

Prime Minister Mariano Rajoy says he is in touch with the authorities but at the moment attending to the injured is priority.

Spain was hit by what is still Europe's deadliest jihadist attack in March 2004, when bombs exploded on commuter trains in Madrid, killing 191 people in an attack claimed by Al Qaeda-inspired extremists.

Vehicles have been used in several terror attacks in Europe in recent years, including a jihadist massacre that claimed 86 lives in the French Riviera city of Nice.That onslaught in July last year and other similar attacks were claimed by the Islamic State jihadist group.

In July 2015, a hooded attacker opened fire outside a hotel in downtown Barcelona near Las Ramblas, leaving two people injured, police said. One person was struck by bullets while the other was hurt as they tried to flee the shooter, who fled the scene. No suspected motive for the attack was given.

Spain has emerged as a potential target for jihadists, with extremist websites mentioning it for historical reasons, since much of its territory was once under Muslim rule.

But they publicise every arrest of alleged jihadists, most of them detained for propaganda, recruitment for extremist groups or "glorifying terrorism."

According to the interior ministry, more than 180 "jihadist terrorists" have been arrested since June 2015 when Spain raised the terror alert level to four out of a maximum of five, in domestic and foreign operations. AFP

Driver of the van fled the vehicle soon after attack

Circumstances of attack yet to be revealed, says police

The El Pais newspaper said several people were left lying on the ground. CNN reports that it is not clear whether the crash was intentional. A photograph shown by public broadcaster RTVE showed three people lying on the ground in the street. Catalan emergency services said people should stay away from the area around Plaça de Catalunya, which is popular with tourists.

Police confirm it is a 'massive crash' where several are injured

"Huge collision on Las Ramblas in Barcelona by an individual driving a van, many injuries," a statement said. The area around the incident was cordoned off, with several ambulances and police vehicles on the scene, an AFP correspondent said. Stores were also shut down its stores.

Police confirms that attack was ‘terror attack’, ask tourists to avoid the area

US comes to Spain's aid in moments of terror attack

#BREAKING US offers help to Spain in wake of Barcelona attack: Tillerson

Barcelona attack eyewitness: 'Van was 10 feet from me' https://t.co/ynAVohFLmn

Police confirms one person has died and that 32 people have been injured, 10 of them critical

An image of the van that mowed down people, courtesy Twitter 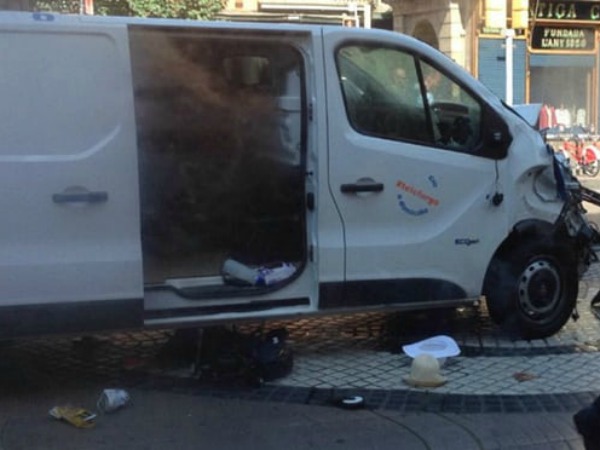 Map of the route taken by the attackers

All metro and train stations have been closed

#Barcelona terror attack: Local media reports that Police has ordered stores and nearby Metro and train stations to be closed | ANI pic.twitter.com/TjG1GWwain

Eyewitnesses say people try to use shops as escape route

Barcelona: Panic as people use shop as escape route https://t.co/7VxelZK88E

Sec. Tillerson: We offer condolences to the loss of life & the injuries that have occurred to so many innocent people yet again. #Barcelona pic.twitter.com/RKcE5MCqNB

A driver deliberately smashed a van into a crowd on Barcelona's most popular street on Thursday, killing at least one person before fleeing to a nearby bar, police said. Spanish public broadcaster RTVE says 1 suspect in Barcelona van attack has been arrested, reports AP. Officers in Spain's second-largest city said the ramming on the popular Las Ramblas boulevard was a "terrorist attack" and a police source said one suspect had left the scene and was "holed up in a bar".

Regional interior minister Joaquin Forn said that at least one person had been killed and 32 others were wounded, warning however that the toll could rise.

Vehicles have been used in several terror attacks in Europe in recent years, including a jihadist massacre that claimed 86 lives in the French Riviera city of Nice.

The famous Las Ramblas is one of Barcelona's busiest streets, lined with shops and restaurants and normally thronged with tourists and street performers until well into the night.

Police said there had been a "huge collision" between a van and pedestrians on the thoroughfare and a police source said officers were seeking a total of two suspects.

US Secretary of State Rex Tillerson is sending condolences to the families and victims of the attack in Barcelona and has offered U.S. assistance to authorities in Spain.

He said U.S. diplomats in Spain are currently assisting Americans there and asked those who are safe to notify their friends and families. He said the United States would never relent in tracking down terrorist suspects and holding them to account for their actions.

He said "terrorists around the world should know that the United States and our allies are resolved to find you and bring you to justice", reports AP.

Chaotic scenes were witnessed at busy commercial area of Barcelona. Police in the northern Spanish city say a white van jumped the sidewalk in the district. The police has confirmed that the incident was "most likely" a terrorist attack.

Following the incident, the neighbourhood was cordoned off, with several ambulances and police vehicles on the scene, an AFP correspondent said. Stores were also shut down in the area. According to CNN, eight ambulances are on the scene so far and citizens have been evacuated.

A photograph shown by public broadcaster RTVE allegedly shows three people lying on the ground in the street. Catalan emergency services have warned people to stay away from around Plaça de Catalunya, an area popular with tourists.

According to AP, Las Ramblas is a street comprising several stalls and shops and cuts through the center of Barcelona, and is one of the city's top tourist destinations. People walk down a wide, pedestrianised path in the center of the street, but cars can travel on either side.

There has been no official confirmation on date or time for the announcement of CBSE 10th Result 2021. Students are advised to regularly check the official website cbseresults.nic.in for updates