By Colin Packham SYDNEY (Reuters) - Thousands of firefighters burned grassland in eastern Australia on Monday in a desperate bid to starve an anticipated new front of bushfires of fuel before forecast searing temperatures on Tuesday. 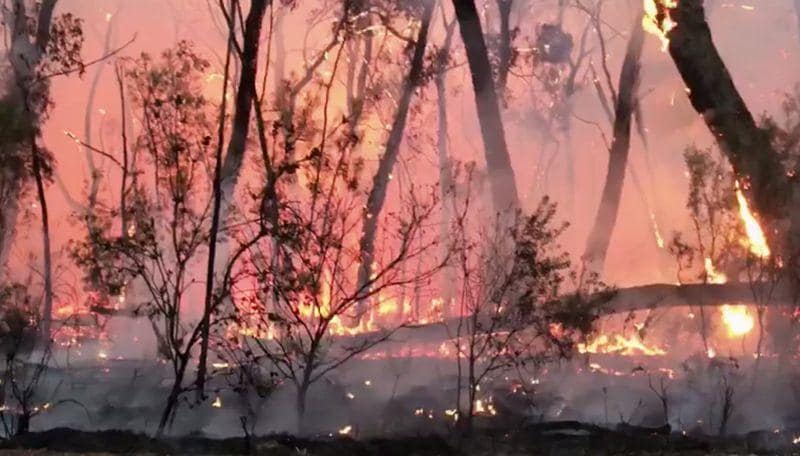 SYDNEY (Reuters) - Thousands of firefighters burned grassland in eastern Australia on Monday in a desperate bid to starve an anticipated new front of bushfires of fuel before forecast searing temperatures on Tuesday.

More than 100 fires are ablaze in New South Wales and Victoria states, many of which have been burning for several weeks and including a single blaze that stretches more than 60 km (37.2 miles) in a national park north of Sydney.

"Firefighters are doing kilometres and kilometres of back burning operations, containment line establishment and consolidation."

Wildfires have killed at least four people, destroyed more than 680 homes and burned more than 2.5 million acres (1 million hectares) of bushland across eastern Australia since the start of November.

Bushfires are common in Australia's hot, dry summers, but the ferocity and early arrival of the fires in the southern spring is unprecedented. Experts have said climate change has left bushland tinder-dry.

Stoked by strong winds, several fires have combined into a single massive blaze that is threatening the region of Hawkesbury, about 50 km north west of Sydney.

Authorities have warned the blaze is unlikely to be extinguished until meaningful rain arrives - which is not expected for at least three months - and forecasts indicate the fire could be pushed towards larger population areas.

"The big danger is if the winds come from the west and that's exactly what is forecast," Hawkesbury City Mayor Barry Calvert told Reuters. "People are trying to clear their gutters, clean up the leaves on the ground, anything they can do to keep their properties safe."

Calvert said many locals were struggling to move animals and livestock in an area renowned for breeding racehorses.

"We've opened the showground for people to move their animals, but many people here may have 20 horses and only two horse boxes so they can't move them quickly," Calvert told Reuters.

The wildfires have blanketed Sydney - home to more than 5 million people - in smoke and ash for more than two weeks, turning the daytime sky orange, obscuring visibility and prompting commuters to wear breathing masks.

The city, usually known for its sea breezes, clear skies and beach-dotted coastline, has made several appearances in the top ten lists of the most polluted cities in the world. Severe water restrictions begin in the harbour city on Tuesday.