Sydney: One of two men charged with planning to launch an imminent terrorist attack in Australia appeared on a video threatening to stab the kidneys and necks of their victims, the nation's prime minister said on Thursday, accusing the pair of "monstrous extremism."

Omar Al-Kutobi, 24, and Mohammad Kiad, 25, were charged this week with undertaking acts in preparation or planning for a terrorist act after police raided their Sydney home and seized the video, a homemade flag associated with the Islamic State group, a machete and a hunting knife.

Prime Minister Tony Abbott, who watched the video, told Parliament it depicted one of the men kneeling before the flag with a knife in his hand and a machete in front of him. Abbott quoted the man as saying: "I swear to almighty Allah, we will carry out the first operation for the soldiers of the caliphate in Australia. ... I swear to almighty Allah, blond people, there is no room for blame between you and us. We only owe you stabbing the kidneys and striking necks."

Police say they thwarted a terrorist attack in Sydney by mere hours on Tuesday when they swooped on Al-Kutobi and Kiad's home after receiving a tip that they were about to launch a violent attack. Neither man has applied for bail or entered a plea to the charges, which carry a possible sentence of life in prison. 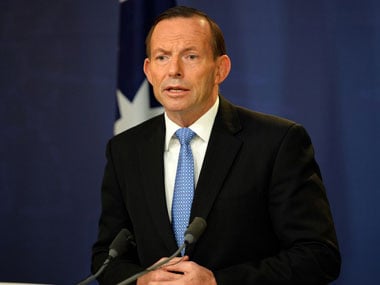 On Thursday, responding to reports that the men came to Australia as refugees and that one arrived on a false passport, Immigration Minister Peter Dutton said one of them may have entered Australia with "some false documentation." He has asked for an urgent review into the matter.

"I don't think it would be possible to witness uglier fanaticism than this, monstrous extremism than this, and I regret to say it is now present in our country," Abbott said.

Police are trying to determine whether the men were in contact with anyone from the Islamic State movement.

Officials don't believe there is any link between the alleged plot and another plot that prompted a series of counterterror raids in Sydney in September. One man arrested during those raids was charged with conspiring with an Islamic State leader in Syria to behead a random person in Sydney.

In December, Man Monis, an Iranian-born, self-styled cleric with a long criminal history, took 18 people hostage inside a downtown Sydney cafe. Among his demands was that he be delivered an Islamic State flag. Investigators have since said it doesn't appear Monis had established any contact with the militant group.