By Michelle Nichols UNITED NATIONS (Reuters) - U.S. Ambassador to the United Nations Nikki Haley warned Russia on Monday that its seizure of three Ukrainian vessels was an 'outrageous violation of sovereign Ukrainian territory' and urged Moscow to reduce tensions caused by its 'arrogant' act. 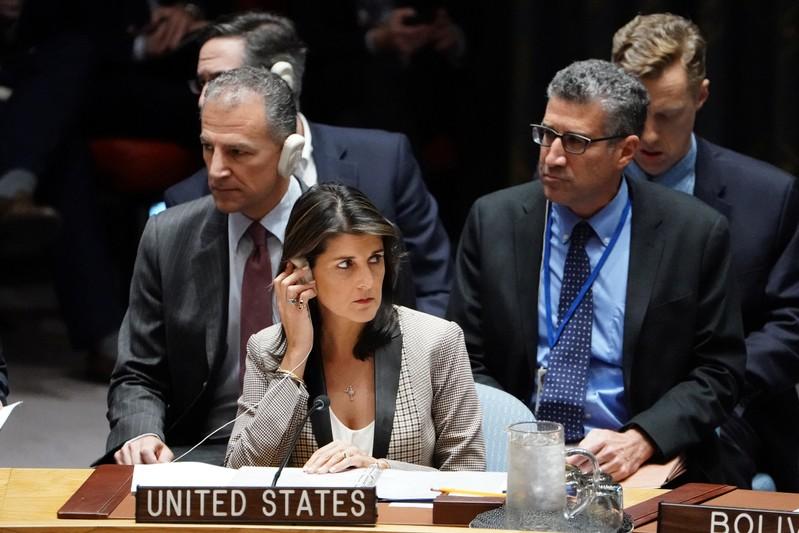 UNITED NATIONS (Reuters) - U.S. Ambassador to the United Nations Nikki Haley warned Russia on Monday that its seizure of three Ukrainian vessels was an "outrageous violation of sovereign Ukrainian territory" and urged Moscow to reduce tensions caused by its "arrogant" act.

Haley said she spoke with President Donald Trump and Secretary of State Mike Pompeo earlier on Monday and her statement "reflects the concerns at the highest level."

"As President Trump has said many times, the United States would welcome a normal relationship with Russia. But outlaw actions like this one continue to make that impossible," said Haley, a member of Trump's cabinet.

"The United States will maintain its Crimea-related sanctions against Russia. Further Russian escalation of this kind will only make matters worse. It will further undermine Russia's standing in the world. It will further sour Russia’s relations with the U.S. and many other countries," Haley said.

Russian Deputy U.N. Ambassador Dmitry Polyanskiy accused Ukraine of planning the incident and suggested it was because President Petro Poroshenko's popularity among voters was low ahead of an election next year.

"How can he maintain power in these circumstances? It's clear - organize provocation and once again accuse Russia of everything, inflate his own ratings and put himself forward as the savior of the nation," Polyanskiy told the council.

"This is about canceling the elections despite all of Poroshenko's assurances to the contrary," he said, warning that Russia "has never caused the first blow, but it knows how to protect itself."

U.N. political affairs chief Rosemary DiCarlo told the Security Council the United Nations could not independently verify what had happened, but said that it only threatens to cause the situation in and around Ukraine to deteriorate.

"We strongly urge both the Russian Federation and Ukraine to refrain from any ratcheting up of actions or rhetoric and remind both of the need to contain this incident so as to prevent a serious escalation that may have unforeseen consequences," she said.

The 15-member Security Council has met dozens of times over the crisis in Ukraine since Russia annexed Crimea in 2014. It is unable to take any action as Russia is one of the council's five veto powers.

The Ukrainian vessels seized by Russia on Sunday had been trying to enter the Sea of Azov from the Black Sea via the narrow Kerch Strait that separates Crimea from the Russian mainland.