By Aaron Ross and Ange Aboa ABIDJAN (Reuters) - At least five people died during clashes on election day in Ivory Coast, officials said on Sunday, as President Alassane Ouattara seeks a third term in office that his opponents say is illegal. 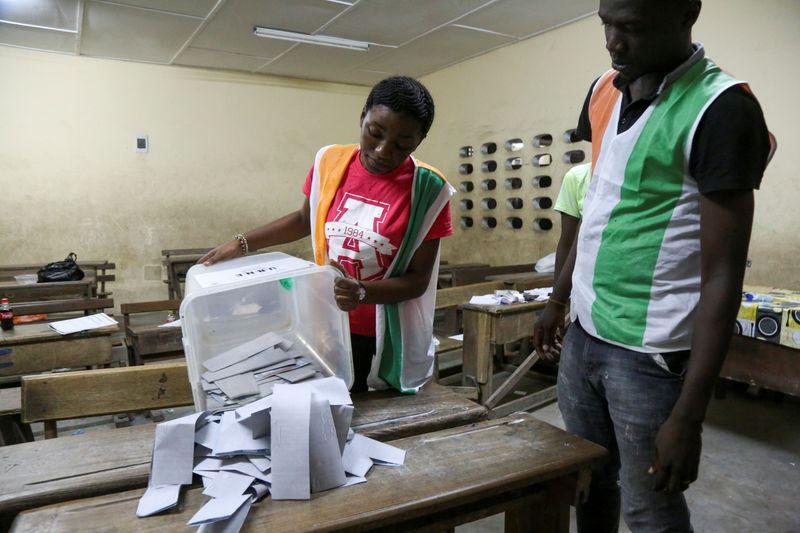 By Aaron Ross and Ange Aboa

ABIDJAN (Reuters) - At least five people died during clashes on election day in Ivory Coast, officials said on Sunday, as President Alassane Ouattara seeks a third term in office that his opponents say is illegal.

The country was spared the kind of widespread violence that many feared would erupt during voting on Saturday, but the atmosphere remained tense ahead of partial results expected on Sunday.

Opponents of 78-year-old Ouattara say the constitution limits presidents to two terms, and that his bid risks shattering the fragile peace since a civil war killed 3,000 people in 2010-11. The tensions caused by his candidacy could also erode the economic gains that have made Ivory Coast one of Africa's fastest-growing economies, they say.

Ouattara says the approval of a new constitution in 2016 allowed him to restart his mandate.

The streets of the country's economic engine, Abidjan, were quiet on Sunday, as they were on election day, as many stayed home for fear of violence. Some had already left the commercial capital for villages in the provinces ahead of the vote.

However, some opposition strongholds in the center of the country did see skirmishes on Saturday.

"Young armed men from the surrounding villages ... fired on the other young people," said Germain N'Dri Koffi, mayor of the town of Tiebissou in the centre of the country, the heartland of opposition candidate, former president Henri Konan Bedie.

Four were killed and 27 injured by bullets and machetes, he said. One other person was killed in the pro-Bedie town of Niable, a government official said on condition of anonymity.

Main opposition candidates Pascal Affi N'Guessan and Bedie urged voters to boycott the election. That is expected to hand Ouattara victory, but may undermine the legitimacy of a third term.

"The opposition calls from this moment for general mobilization to block this dictatorship," he told a press conference.

The towns where the violence occurred on Saturday are not major producers of cocoa, of which Ivory Coast is the world's top grower. However, some buyers told Reuters on Sunday that middlemen were avoiding trips into rural areas of cocoa-growing regions for fear of violence.