By Maggie Fick ADDIS ABABA (Reuters) - Bouquets of white roses surrounded aviation staff as they gathered at Bole International Airport on Sunday to remember the two pilots and six crew, who perished along with 149 passengers in the Ethiopia Airlines crash a week ago. Weeping women held slender single stems in their shaking hands. 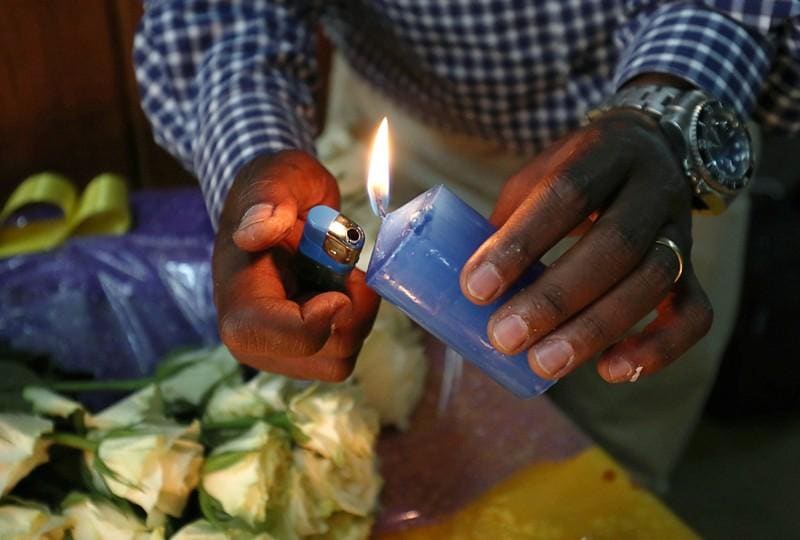 ADDIS ABABA (Reuters) - Bouquets of white roses surrounded aviation staff as they gathered at Bole International Airport on Sunday to remember the two pilots and six crew, who perished along with 149 passengers in the Ethiopia Airlines crash a week ago.

Weeping women held slender single stems in their shaking hands. Banks of the white flowers, the traditional colour of mourning, were placed in front of a row of empty coffins at the ceremony.

A band - some of the musicians in tears - temporarily stopped playing as band members ran to comfort bereaved relatives who lunged forward, wailing in grief over the coffins.

"Our deep sorrow cannot bring them back," an Orthodox priest in a traditional black turban and black robes told the crowd gathered outside an airport hangar.

"This is the grief of the world," he said, as Ethiopian Airlines staff sobbed in each other's arms.

At least the crash had taken place in Ethiopia - the holy land - he said, prompting "amens" from the crowd.

In Paris, investigators examined black box recorders to determine why the aircraft plunged into a field shortly after take off from Addis Ababa, searching for similarities to an October Lion Air crash that killed 189 people.

Both crashes involved the same model of plane - a Boeing 737 MAX 8 - causing aviation authorities to ground the model around the world after last week's accident.

Data from the Ethiopian Airlines flight recorder had been successfully downloaded, France's BEA air accident investigation agency said on Sunday. That information had been transferred to Ethiopian investigators, the agency said, adding that its technical work on the flight data recorder and cockpit voice recorder was now done.

In the Ethiopian capital, families and airline staff were focused on honouring their dead.

At the airport memorial, a banner offered "deepest condolences and comfort" to the families of the deceased crew.

"He was a really nice person, a good person, all the words you can find to talk about a good person apply. He was a very kind human being," she said, before dissolving in tears.

A service for the families of passengers - more than 30 nationalities were onboard - was also held beneath the pink stone spires of Addis Ababa's Holy Trinity Cathedral.

Families and relatives of the victims threw themselves on the coffins as they arrived and kissed pictures of loved ones.

Incense was waved over the coffins, but there was so much weeping that prayers had to be paused. Afterwards, some said the service meant they could now shift focus from grieving for the dead to caring for the living.

"Her husband is now left with an infant, he has to shift his attention to his life and raising his baby," said Getachew Negatu, a friend of one of the stewardesses onboard the flight.

"Her father and mother, including her sisters, are devastated by this grief. Everyone has got to come back to life as we ... cannot live like this forever.”

The families were offered charred earth from the crash site to bury, because most of the bodies were destroyed by the impact and fire. Identifying the small remains that have been collected may take up to six months.