By James Oliphant WASHINGTON (Reuters) - The sexual assault allegations against Supreme Court nominee Brett Kavanaugh may remove pressure that some Democratic senators faced to back his confirmation as a way of reassuring conservative voters in congressional elections just weeks away. Since Kavanaugh was nominated to the high court by President Donald Trump, Democratic senators from states that Trump won in 2016 faced a dilemma. If they voted against Kavanaugh, they could appear to be out of step with voters at home and risk losing re-election. 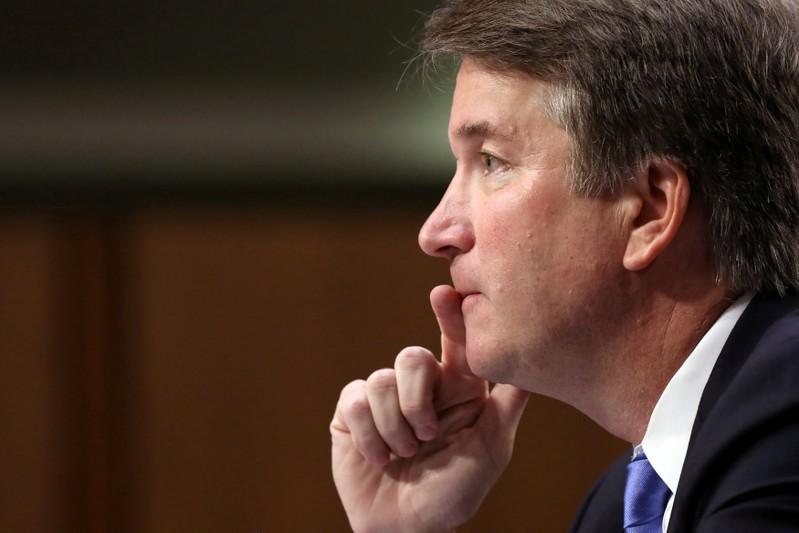 WASHINGTON (Reuters) - The sexual assault allegations against Supreme Court nominee Brett Kavanaugh may remove pressure that some Democratic senators faced to back his confirmation as a way of reassuring conservative voters in congressional elections just weeks away.

Since Kavanaugh was nominated to the high court by President Donald Trump, Democratic senators from states that Trump won in 2016 faced a dilemma. If they voted against Kavanaugh, they could appear to be out of step with voters at home and risk losing re-election. Vote for him, and they would hand the president a bipartisan victory.

The claim that Kavanaugh assaulted a woman while in high school now gives those endangered Democrats an escape hatch. They can oppose the nominee without appearing to voters as if they are defying the president, strategists said.

Kavanaugh has denied the assault allegation, calling it "completely false."

"For those Democrats up for re-election from states that Trump carried, they now have absolutely no reason to vote for Kavanaugh. Period," said Jim Manley, a former high-ranking Democratic Senate aide. "They have all the cover they need."

The Nov. 6 congressional elections will determine whether Republicans retain majorities in the Senate and House of Representatives. Democrats are currently favoured to take the House, while becoming increasingly confident of adding the two Senate seats that would give them control of that chamber.

The most vulnerable Democratic senators, including Joe Donnelly of Indiana, Heidi Heitkamp of North Dakota and Joe Manchin of West Virginia, have not indicated whether they would side with most of their party members in opposing Kavanaugh. All three backed Trump's first Supreme Court pick, Neil Gorsuch.

The Republican chairman of the Senate Judiciary Committee, Chuck Grassley, has scheduled a Monday hearing to allow Kavanaugh and his accuser, Christine Blasey Ford, to testify, but has said he will permit no other testimony. Ford has not yet said if she will attend.

Senator Dianne Feinstein, the committee's top Democrat, on Tuesday said the FBI should investigate before further hearings into the claims.

At the White House, Trump said he does not believe the FBI needs to be involved. He said the process should be delayed "until it's finished."

Republicans had hoped Trump's second Supreme Court nomination would galvanize conservative voters while placing incumbent Democrats in a tough position of having to back Kavanaugh to reassure Trump's base.

With their narrow Senate majority, Republicans could ram through Kavanaugh's nomination without any Democratic support, but doing so might prove risky in a year that has seen a surge of women, motivated by their opposition to Trump, vote in primary and special elections.

Two Republicans challenging the vulnerable Senate Democrats on Tuesday criticized the timing of the release of the claims.

U.S. Representative Kevin Cramer, who is running against Heitkamp in North Dakota, said in a statement that he found it "hard not to be sceptical considering the timing and history of the allegations," according to the Grand Forks Herald.

"I support Senator Grassley's decision to have these 11th hour allegations thoroughly reviewed by the Senate Judiciary Committee, and weighed against Judge Kavanaugh's decades of public service, sterling record on the bench, outstanding personal reputation, and his unequivocal denial of the allegations," the Indianapolis Star quoted Braun as saying.

The two campaigns did not immediately respond to requests for comment.

The allegations against Kavanaugh have come as the #MeToo movement has prompted hundreds of women to come forward to accuse powerful men in business, politics and entertainment of engaging in routine sexual misconduct.

"Any Senate Democrat, hailing from a red or blue or purple state, is wise to think deeply about how the larger cultural shifts over the past year-plus should affect their political beliefs," said Tracy Sefl, a Democratic consultant in Chicago. "For the Kavanaugh vote, there is a litany of valid concerns that are larger than a partisan issue."

Senate Republicans seemed to recognise the danger of appearing insensitive, said Ford O'Connell, a Republican strategist. He said a concerted stand against Kavanaugh could motivate Republican voters to go the polls.

Alex Conant, a former aide to Republican Senator Marco Rubio, said there remains risk to Donnelly and the other red-state senators if they oppose Kavanaugh on any grounds, given they have boasted of their ability to work with Trump.

"Red-state senators are not going to win re-election by running against Trump," Conant said. "They'll win if they are actually independent."