As US sanctions hit Iran's economy, the country's youth march on with dreams of dignity, a better future

In early January, after tensions between Iran and the United States escalated to the brink of war, President Donald Trump announced a detente of sorts, stating, “The United States is ready to embrace peace with all who seek it.”

It may have sounded like a conciliatory gesture, but the Trump administration went on to levy additional economic sanctions against the country only two days later.

As someone who has studied the lives of Iran’s working classes, I know just how damaging economic warfare has been. It’s hit young Iranians, who comprise a large portion of the population, particularly hard. High rates of inflation – on the order of 38.6 percent over the past 12 months – and a youth unemployment rate of 28.6 percent have drastically reduced their ability to purchase basic goods and feel any semblance of financial security.

Over the past 12 years, I’ve studied various groups of lower-class young people and their families in their homes, neighborhoods and workplaces, in shops, and in parks. I’ve also interviewed 44 youth between the ages of 15 and 29 who have been sidelined to the socioeconomic margins.

I wanted to know how they cope with prolonged insecurity and the constant threat of crisis.

Interestingly – and despite what you might see on the news – many don’t react by rebelling against authority or by regularly taking to the streets.

A central observation from my research and forthcoming book has been that, when faced with conditions of uncertainty, the young people I spoke with simply sought respect, acceptance and support from their communities. Life becomes a quest not for revolution, riches or vengeance, but for dignity.

The desire for status and dignity is an integral part of Iranian society. 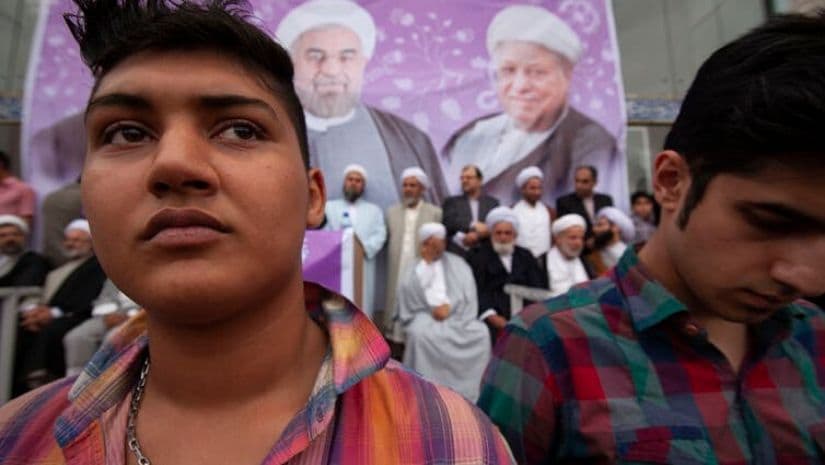 Within Iran’s lower classes, there is a highly conformist youth culture. Representational image via The Conversation/ Farzin Mahmoudzadeh, Author provided

Most of the poor, younger city dwellers I studied try to achieve this through both their conduct and their dress. They want to be seen as classy, diligent and moral. In communities that value prestige and look down on poverty, this becomes their ticket to a better life.

So in an attempt to conceal their poverty, they’ll spend their limited income on the latest trends so they can attain a 'modern' appearance, from having the latest smartphones to wearing brand-name shoes and shirts – or at least knockoffs.

In order to avoid being seen as lazy or delinquent, the young people I interviewed work diligently and avoid being associated with petty criminals, like drug dealers. Even though there’s rarely enough work to go around, they get creative. They work in the informal economy as shop apprentices, street vendors and seamstresses. Those who can’t find work take up unpaid work babysitting for family members or helping with a family business in an effort to appear hardworking. By doing this, they can assume a moral high ground – regardless of how little money they’re actually making.

As one local, middle-aged woman told me, “There’s something wrong with a kid who doesn’t work.”

These young men and women are adhering to a set of values prized by their communities and promoted by society through billboards, national television and official speeches.

The result is a relatively stable social order – and a youth culture that’s highly conformist.

This might come as a surprise to some, since some Western media outlets sometimes fixate on acts of rebellion.

In reality, deviance – especially among the lower classes – is rare. Many simply can’t afford the consequences of being shunned by those around them.

Rewards don’t need to be material

The quest for dignity is only part of the story. Like many young people around the world, most youth in Iran have dreams of a better future. But for those dealing with daily economic hardship, there’s a chasm between their goals and what’s possible.

“I wanted to get my bachelor’s degree and have a job where I sat behind a desk,” said Babak, a street vendor, “but I had to drop out of ninth grade in order to meet my family’s expenses.”

That gap may never be fully breached. But many young Iranians I met still feel as if it’s possible to – in the words of a mechanic’s apprentice – “bring themselves up.”

The young people I interviewed do this not by trying to game the system, but by following the rules: diligence, self-sufficiency, a smart appearance, and moral and sexual cleanliness. For this, communities reward them with jobs, small promotions, or even just more deference. The material benefits might be minimal, but people nonetheless feel validated and included in the broader fabric of the nation.

In other contexts, researchers have found that 'looking the part' – performing what’s deemed to be attractive to society – matters to people’s life prospects. The youth I knew in Iran do the same. They might not fully escape poverty, but they can escape stigma.

To them, that matters.

The limits of virtue

Of course, not everyone in Iran can maintain an appearance of industry, class and virtue.

Focused on only helping those they deem 'deserving,' communities do little to lift up people who have fallen through the cracks. Friends and acquaintances are unwilling to recommend them for jobs, neighbors avoid connecting with them, families view them with shame.

It can all seem a bit Darwinian, with those deemed unfit becoming social pariahs.

And yet, there are many youth who persevere, who believe that living by the rules, day in and day out, is the right way to live. As Ibrahim, a laborer, emphasised, “I try to live in a good way. If people remember you as good, this is reason to be proud.” To youth like Ibrahim, living a worthy life means not simply accumulating material goods, but staying true to a moral code.

In the face of rising prices, dwindling jobs, and few prospects for socioeconomic change, the routines of daily life create space for those who have suffered most under the weight of suffocating sanctions to breathe – and, in many cases, grow.