As Notre-Dame money rolls in, some eyebrows raised over rush of funds

By Luke Baker and Pascale Denis PARIS (Reuters) - Pledged donations from French billionaires, companies and ordinary citizens for the restoration of fire-ravaged Notre-Dame cathedral are approaching 900 million euros after just two days, a reflection of the landmark's resonance in the national psyche. But the outpouring has prompted questions from charities, politicians and commentators about why some of the business donors have offered so much so quickly, including speculation about how they might benefit from tax breaks on the donations. 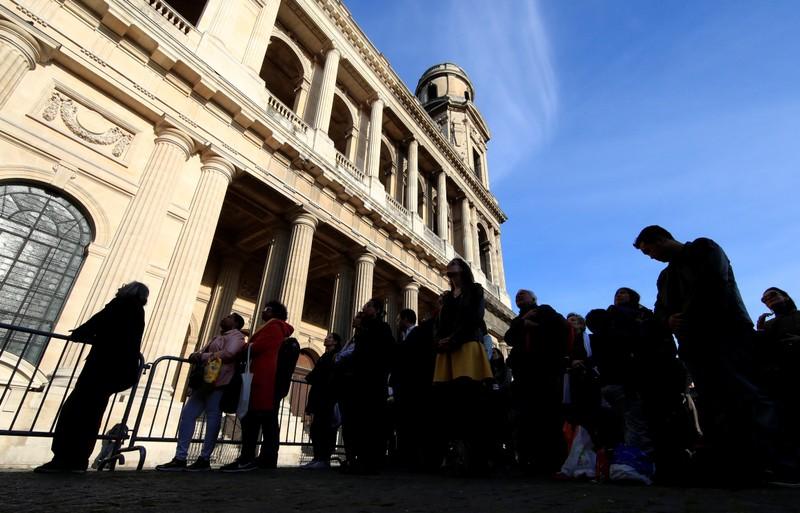 By Luke Baker and Pascale Denis

PARIS (Reuters) - Pledged donations from French billionaires, companies and ordinary citizens for the restoration of fire-ravaged Notre-Dame cathedral are approaching 900 million euros after just two days, a reflection of the landmark's resonance in the national psyche.

But the outpouring has prompted questions from charities, politicians and commentators about why some of the business donors have offered so much so quickly, including speculation about how they might benefit from tax breaks on the donations.

People on social media, both in France and abroad, have expressed frustration that other disasters - from the Syrian and Iraq refugee crisis to the Grenfell Tower fire in London - have not received anything like the same degree of support.

Pinault, 56, a celebrity figure in part because he is married to actress Salma Hayek, pledged 100 million euros ($113 million) as the blaze was still raging - a decision dictated by emotion, a spokeswoman for his family's holding company said.

Hours later, his great rival Bernard Arnault, France's richest man and the head of Louis Vuitton owner LVMH, announced he was donating 200 million euros, moved by the alarming pictures on TV, according to a group spokesman.

The Bettencourt-Meyer family, the largest shareholder in L'Oreal, followed suit a while later, pledging a combined 200 million euros alongside the global cosmetics group.

Brand and reputation experts said the quick response by some of France's most recognisable corporate titans made sense, especially since the disaster involves a national symbol.

Adrian Palmer, the head of the marketing and reputation faculty at the Henley Business School, said all three billionaire families and their companies were closely aligned with the nation, and benefit from reinforcing the link.

"These brands stand for France and they sell around the world, so anything that puts the France brand at the centre of people's minds is going to help them and how they are regarded," he said. "It creates positive associations in people's minds, that they are generous, caring and good."

Online, LVMH's announcement of the donations was met with a host of comments on Twitter, from France and abroad, suggesting the money might be better spent in Africa or combatting climate change than rebuilding a cathedral. Others suggested the generosity was little more than smart marketing.

Palmer said that even from a non-marketing point of view, early offers of support could be beneficial for a company's political positioning. All three firms are broadly supportive of President Emmanuel Macron and want to be seen as helpful with backing for his calls to rebuild.

"Macron has been facing protests," he said, referring to the "yellow vests" street demonstrations against the high cost of living that have rocked France for months. "In a sense the disaster at Notre-Dame has become a unifying issue, so they want to show they are aligned."

Still, there has been blowback. Charitable donations benefit from a 60 percent tax deduction in France, which prompted immediate suggestions by critics that Pinault, Arnault and the others were being less magnanimous than initially appeared.

"It's the public that will end up bearing the cost," said Gilles Carrez, a member of parliament for the centre-right Les Republicains party, who sits on the finance committee.

The Pinault family, which was at odds with Macron last year on issues of tax and the president's policies towards the poor, said in a statement on Wednesday it was renouncing any tax advantage it might get from its donation.

LVMH - which had benefited from large tax breaks to build the Louis Vuitton Foundation in western Paris - dismissed the notion it was merely trying to boost its image.

"The only thing at issue here is to try and raise as much funding as possible to address this urgent issue, and that goes beyond any tax or accounting calculations," the LVMH group spokesman said in response to questions from Reuters.

The Bettencourt-Meyer family has declined to comment on its donations.

All three companies and the families behind them are already closely associated with the arts and cultural giving in France, which makes their rapid collective offer of half a billion euros to support a 12th-century Gothic masterpiece less surprising.

"No doubt big brands want to genuinely demonstrate their empathy and show support to the re-building of an artefact that is not just a building but a cultural symbol," said Keith Glanfield, a professor at Aston Business School.

"By some this may be seen as no more than a cynical attempt to sell more product."

On Twitter and Facebook, and in the auditorium of the European Parliament, the question was less about whether they and others should give, and more about why such generosity was going towards an old building hit by a disaster in which no one died.

"We are very attached to where Father Pierre's funeral was held," said the Abbe Pierre Foundation, a homelessness charity named after a priest whose 2007 funeral at Notre-Dame was attended by then-President Jacques Chirac.

"But we are equally committed to his cause. If you could contribute even one percent of the amount to the homeless, we would be moved," it said on Twitter.

Speaking to European lawmakers on Tuesday, teenage climate campaigner Greta Thunberg said she did not want to diminish the Notre-Dame fire, but wished there was an equal outpouring of support to combat issues such as climate change.

Markus Renner, a professor of brand management in Switzerland and the founder of the International Brand and Reputation Community, said he was surprised to see Pinault, Arnault and the Bettencourts give so much so quickly.

"Why not wait and find out how much is needed and then step forward?" he said, pointing out that the billionaires and companies could have given the money silently, but chose not to.

"It seems to be a little bit tactical and very much from the gut," he said, adding he doubted whether German companies would step up so promptly if Cologne cathedral burnt down.

If the fire ends up being covered by insurance, the charitable donations may not end up being needed to finance the restoration.