By Catherine Koppel LAFAYETTE, La. (Reuters) - Louisiana steeled itself on Thursday for another in a record-breaking series of violent storms as Hurricane Delta took aim at a corner of the state still recovering from the last storm. Delta's size grew and its winds intensified over the warm waters of the Gulf of Mexico on Thursday. 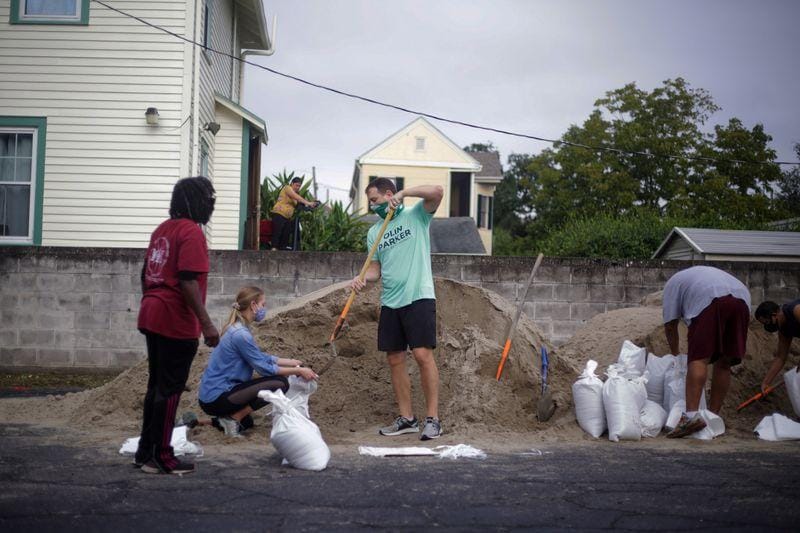 LAFAYETTE, La. (Reuters) - Louisiana steeled itself on Thursday for another in a record-breaking series of violent storms as Hurricane Delta took aim at a corner of the state still recovering from the last storm.

Delta's size grew and its winds intensified over the warm waters of the Gulf of Mexico on Thursday. It was forecast to become a Category 3 storm with up to 115 miles per hour (185 kmh) winds before losing some punch Friday over cooler waters along the Gulf Coast.

"We've survived much worst," said Lafayette resident Rebecca Sebastian as she and two friends stopped in the city center to buy sweets. "We may have a few gusts of 100 mph winds but we've done this before."

The storm is expected to strike near Creole, Louisiana, as a category 2 storm on the five-step Saffir-Simpson scale. It could unleash tornadoes as it moves over land and drops up to 10 inches (25 cm) of rain. The storm could drive a 4- to 11-foot (1.2-3.3 meters) storm surge up Vermilion Bay on the coast, the National Hurricane Center said.

If Delta increases on Thursday at its current, rapid rate, it could gain enough strength to slam the coast as a borderline major hurricane, said AccuWeather meteorologist Dan Kottlowski.

New Orleans likely will escape the storm and experience gusty winds and mild rain, said Kottlowski, with Lafayette the largest city on the storm's eastern and more dangerous side.

The storm added urgency to the group's regular get-together, she said. "It calms us down," she said.

"We have today to prepare ourselves and our families for the arrival of Hurricane Delta," Louisiana Governor John Bel Edwards told residents. "Let's make it count."

Delta was on track to strike Southwestern Louisiana, a region that bore the brunt of Hurricane Laura's fierce winds and storm surge in September. There are about 8,000 people still living in hotel rooms as a result of the devastation to homes in the southwest of the state from by Laura, Edwards said on Wednesday.