SIDON, Lebanon (Reuters) - Daoud Temsah has been out of a job for half a year. Before that he was earning barely $2 a day at a coffee shop in Lebanon's southern city of Sidon, until coronavirus lockdowns piled pressure on an already broken economy. Politicians unable to agree a new government since the last one quit in the aftermath of the Aug. 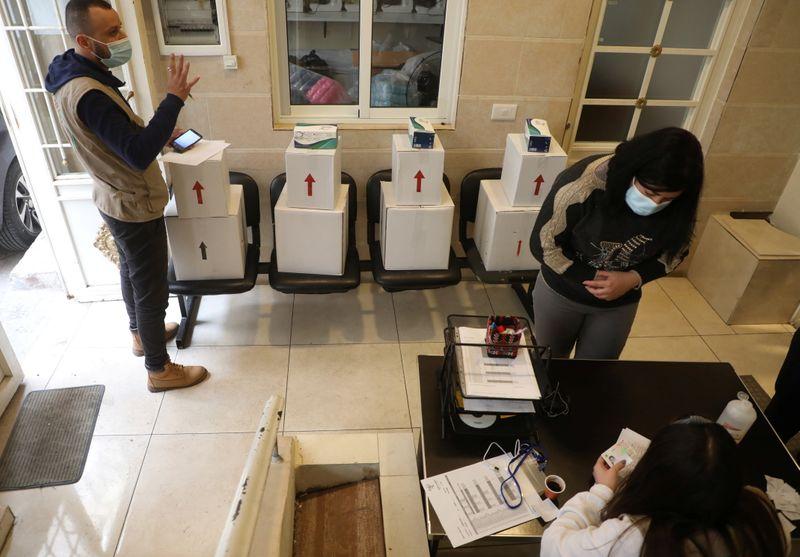 SIDON, Lebanon (Reuters) - Daoud Temsah has been out of a job for half a year. Before that he was earning barely $2 a day at a coffee shop in Lebanon's southern city of Sidon, until coronavirus lockdowns piled pressure on an already broken economy.

Politicians unable to agree a new government since the last one quit in the aftermath of the Aug. 4 Beirut port explosion have left a caretaker administration handling the twin crises of the pandemic and an increasingly impoverished society.

A strict 24-hour lockdown, that has left even supermarkets shut, has been in force since Jan. 11 after a spike in COVID-19 cases brought the medical system to its knees.

Initially, the curfew brought an eerie quiet to the streets of most cities, but a decision to extend it until Feb. 8 with no financial relief to ease economic pain saw protesters take to the streets.

Lebanon's currency has lost more than 80% of its value since 2019 when a financial crisis accelerated and anger erupted into protests over the economy, state corruption and political mismanagement.

With little government help on offer, some relief came to Temsah when a picture of him searching through garbage bins for anything to sell spread on local media, prompting donations.

"Some people donated food, others gave us milk and diapers for my child, and some people promised to fix the house, get me a fridge."

Temsah's case is not unique.

Caretaker Minister of Social Affairs and Tourism Ramzi Musharrafieh told local media this week that 75% of Lebanese were in need of financial aid.

He said the government gives 230,000 families a monthly stipend of 400,000 Lebanese pounds, less than $50 at the current market rate. Lebanon has a population of around 6 million.

Caretaker Prime Minister Hassan Diab said while the aid was not enough to cover needs, it helped "reduce the burdens".

"You want to close the country? Provide people with what they need. It is not acceptable to lock people in their houses and leave them hungry," Mehieddine Antar, a 45-year-old Imam of a mosque told Reuters while taking part in a protest in Sidon this week against the lockdown.

"I went down (to protest) to fight those in power," said Mohamed Fcheich, a demonstrator in Tripoli, who said he supports seven children.

"When I go to the grocery shop to buy dinner for my children, I need to take a big bag of money - that is if there is money."

Three nights of protests in the city turned violent as security forces fired tear gas at protesters attempting to storm a government building. On Thursday, a protester died in clashes.

Prime Minister-designate Saad al-Hariri, at loggerheads with President Michel Aoun over the formation of a cabinet, which is stalling foreign aid, tweeted: "Nothing can justify the attack on private property, markets and public institutions."

Founded in 2012, Basmeh we Zeitooneh, is getting requests from 10,000 families a month on average. While most of its beneficiaries were Syrian refugees before 2019, now half are Lebanese.

"It was rare before to find a Lebanese family asking for help on such basic needs," said Fadi Halliso, one of the organisation's founders.

"We are doing whatever we can and knocking on every door but we are waiting for the government and the politicians to find the real solution to this ... they need to save the country."