As convention opens, Trump sets tone by warning without evidence of 'rigged' vote

By Jeff Mason and Jarrett Renshaw CHARLOTTE, N.C. (Reuters) - President Donald Trump warned Republicans who officially backed his bid for a second term on Monday that November's election could be 'rigged' despite offering no evidence, as the party began outlining its vision for the future on the first night of its national convention. Trump spoke on the first day of the sharply scaled-back Republican National Convention in Charlotte, North Carolina, after receiving enough votes to win the nomination to take on his Democratic rival, former Vice President Joe Biden, in the Nov. 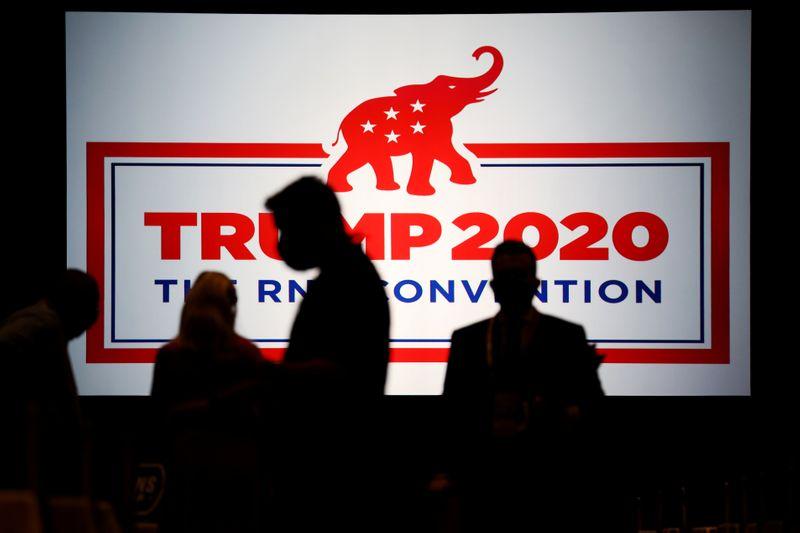 CHARLOTTE, N.C. (Reuters) - President Donald Trump warned Republicans who officially backed his bid for a second term on Monday that November's election could be "rigged" despite offering no evidence, as the party began outlining its vision for the future on the first night of its national convention.

Trump spoke on the first day of the sharply scaled-back Republican National Convention in Charlotte, North Carolina, after receiving enough votes to win the nomination to take on his Democratic rival, former Vice President Joe Biden, in the Nov. 3 election.

The president repeated his assertion that voting by mail, a long-standing feature of American elections that is expected to be far more common during the coronavirus pandemic, will lead to widespread fraud. Independent election security experts say voter fraud is extraordinarily rare in the United States.

"The only way they can take this election away from us is if this is a rigged election," Trump said. "We're going to win."

The four-day convention got under way at a critical juncture for Trump, who trails Biden in national opinion polls during a pandemic that has killed https://graphics.reuters.com/HEALTH-CORONAVIRUS-USA/0100B5K8423/index.html more than 176,000 Americans, erased millions of jobs and eroded the president's standing among voters.

Another frenetic day across the country threatened to overshadow the party's celebration, however. In Washington, congressional Democrats grilled U.S. Postmaster General Louis DeJoy, a Trump donor, over whether service cuts under his watch aimed to curtail efforts to vote by mail.

One of Trump's closest advisers, Kellyanne Conway, said she would leave the White House to focus on her family. Then the New York attorney general disclosed in court papers she is investigating whether Trump and his family business committed fraud; both the president and the Trump Organization have denied wrongdoing.

Meanwhile, Wisconsin's governor deployed the National Guard following a night of unrest in Kenosha, where police on Sunday shot a Black man multiple times in the back.

As befits the first president who starred in his own reality television show, the four-night event will focus heavily on Trump himself. While his acceptance speech will not come until Thursday, when he will address the party from the White House, Trump plans to appear each night, and several members of his family will deliver prime-time speeches.

The first night's program includes remarks from more mainstream Republicans such as Senator Tim Scott, the lone Black Republican in the Senate, and Nikki Haley, Trump's former ambassador to the United Nations.

But it also will feature speakers seemingly aimed at firing up Trump's base, including Mark and Patricia McCloskey, a couple from St. Louis who earned national attention for brandishing guns at Black Lives Matter protesters who marched past their home.

The in-person proceedings marked a contrast with Democrats, who opted for an almost entirely virtual format instead of gathering in the election battleground state of Wisconsin in a nod to the pandemic.

Biden, 77, and his fellow Democrats portrayed Trump, 74, as a force for darkness, chaos and incompetence during their convention, while stressing the Democrats' diversity and values like "empathy" and "unity."

Republicans said their convention would emphasize "law and order," gun rights, tax cuts and the "forgotten" men and women of America.

The McCloskeys will depict Biden as seeking to protect "criminals from honest citizens," leaving Americans unsafe, according to excerpts of speeches sent by organizers. Medical professionals and small-business owners will credit Trump's coronavirus response with saving lives and livelihoods.