As Chinese mountains get hotter, hunt for 'cure-all' fungus gets harder

By Ryan Woo AMNE MACHIN RANGE, China (Reuters) - For Ma Junxiao, an ethnic Hui Muslim farmer from remote western China, the daily climb up sheer mountain slopes to look for a tiny fungus is vital to his family's subsistence. Each spring, Ma travels more than 600 kilometres (370 miles) by road from his impoverished village in Gansu to a jumbled knot of nameless peaks in neighbouring Qinghai province. There, he joins an army of about 80 people hired by a local company to find and pick Ophiocordyceps sinensis, a fungus believed to possess aphrodisiac and medicinal powers 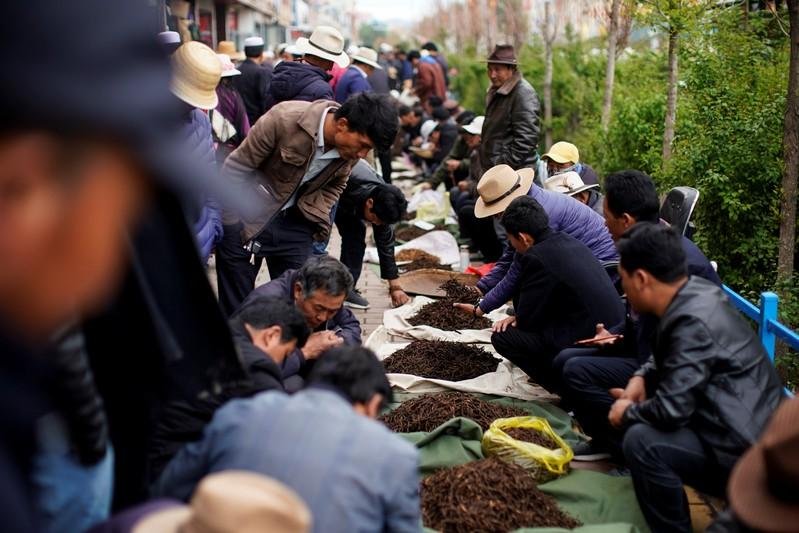 AMNE MACHIN RANGE, China (Reuters) - For Ma Junxiao, an ethnic Hui Muslim farmer from remote western China, the daily climb up sheer mountain slopes to look for a tiny fungus is vital to his family's subsistence.

Each spring, Ma travels more than 600 kilometres (370 miles) by road from his impoverished village in Gansu to a jumbled knot of nameless peaks in neighbouring Qinghai province.

There, he joins an army of about 80 people hired by a local company to find and pick Ophiocordyceps sinensis, a fungus believed to possess aphrodisiac and medicinal powers.

In recent years, cordyceps companies in Qinghai have been paying locals millions of yuan for the right to cordon off an entire mountain each season. (Click https://reut.rs/2NhjsdH to see a picture package about harvesting cordyceps.)

But the cordyceps harvest has waned in Qinghai, the biggest producing region in China. In the last two years, Ma's cordyceps income has more than halved to 7,000-8,000 yuan ($1,018-$1,164) per season as the fungus grew more scarce.

One reason: higher temperatures, less seasonal snow, and receding glaciers have led to warmer mountains, making it less hospitable for the fungus, which thrives in soils that are cold but not frozen, about 5 degrees Celsius (41 degrees Fahrenheit).

"The glaciers are gone, and so are the cordyceps," said Ma, 49, who has been picking cordyceps in Qinghai for the past 14 years.

Glaciers on the Qinghai-Tibet plateau have shrunk 15% in the past half a century as gains in local temperatures outstripped the global average by three-fold, Chinese state media reported last year.

Some climate researchers attribute that to the loss of high-elevation snow needed to deflect the sun's heat back into space. The dark rock beneath the snow, now exposed, absorbs the heat.

At the same time, demand for the highly prized cordyceps has increased sharply in the last decade as an emerging Chinese middle class seeks it to cure everything from kidney disorders to impotence, despite a lack of scientific evidence. A global fad for plant-based superfoods has also stoked interest.

Found in the Himalayas, Tibet and Qinghai's high-altitude grasslands, the caterpillar fungus, as cordyceps is also known, has become the most important source of income for local communities, offering hundreds of seasonal jobs for the poor and a path to riches for commercial harvesters.

At the market peak in 2010, the street price of cordyceps was more than $100,000 per kilogramme, launching a craze and enticing herders and farmers like Ma to flock to the mountains.

Some experts say the enthusiasm has led to overharvesting on top of a less-hospitable climate, despite official insistence on sustainable production.

"I have two sons, and they run a noodle shop in Jiangsu province on the coast. Almost all of my cordyceps income goes towards sustaining that shop," Ma told Reuters.

Grass-dwelling caterpillars deliver the fungus when they migrate, arriving as early as summer, after which the fungus lays dormant in its host through the frigid winter months.

When spring arrives, the warmer weather awakens the fungus, which kills the caterpillar. It then develops a small brown stem from the desiccated body, poking out of the ground and eventually releasing spores that caterpillars eat, restarting the parasitic process.

Global warming has led to a higher rate of evaporation, resulting in less soil moisture and poorer grass cover, said Shen Yongping, a Chinese scientist who has observed the weather patterns on the Qinghai-Tibetan plateau since the 1980s.

An official tally of Qinghai's cordyceps production is not available every year.

At the provincial government's bureau of agriculture and rural affairs, an official declined to give any output data for 2010-2013 and 2015, saying such statistics were "sensitive."

"Some years, production was good and some years it was poor. The demand this year is not too good," said Ma Jingguang, a Guangdong-based merchant on a cordyceps inspection tour in Xinghai county.

Like the big market-towns of Yushu and Golog in southern Qinghai, Xinghai has built its economy on the cordyceps trade.

Each piece of the fungus is sold for at least 20 yuan to visiting buyers from Xining, Qinghai's capital. When the commodity finally reaches a store in Guangdong, the price of the fungus will have multiplied many times.

Despite the slower economy and softer prices, some high-quality cordyceps in Shenzhen still retails for around $72 per gram, or $2,016 per ounce, surpassing the price of gold, which is around $1,340 per ounce.

Much is at stake for cordyceps barons like Ma Jingguang, who posted photos of himself on social media as he departed Qinghai on a private jet, enjoying a cigar after filming an ad for his company.

Even a local driver in Ma's entourage in Qinghai owns an Audi convertible.

For those who actually gather the fungus, like 51-year-old cordyceps picker Zhi Bula, every piece he finds is crucial to getting by.

"I've a son who is a second-year student at Nanjing University," he said. "The cordyceps earnings help."