By David Ljunggren and Allison Lampert OTTAWA/MONTREAL (Reuters) - Canada's efforts to flatten the curve of coronavirus cases have put the country on the cusp of zero deaths from COVID-19 for the first time since March, but officials see worrying signs of a new spike as provinces lift restrictions. For months, Canadians followed strict public health rules on social movement as the 10 provinces quickly shut down large parts of the economy, ramped up testing and boosted space in intensive care units 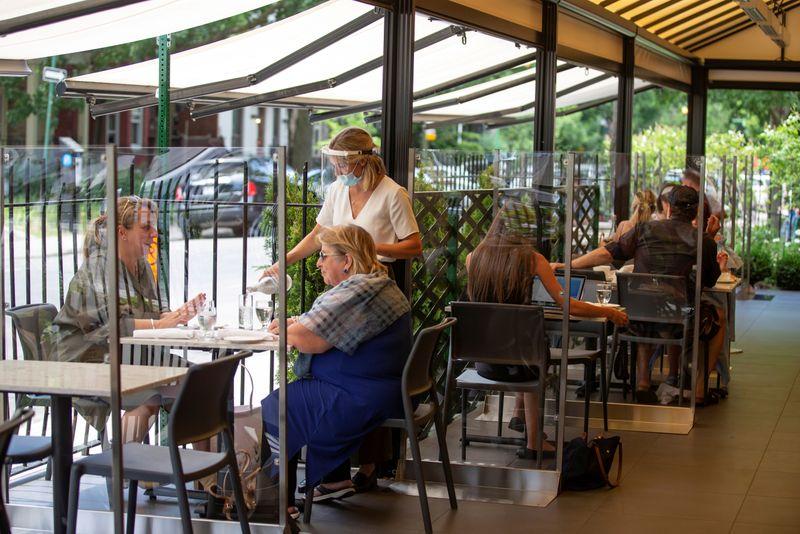 By David Ljunggren and Allison Lampert

OTTAWA/MONTREAL (Reuters) - Canada's efforts to flatten the curve of coronavirus cases have put the country on the cusp of zero deaths from COVID-19 for the first time since March, but officials see worrying signs of a new spike as provinces lift restrictions.

For months, Canadians followed strict public health rules on social movement as the 10 provinces quickly shut down large parts of the economy, ramped up testing and boosted space in intensive care units.

Some provinces curbed internal journeys while Ottawa barred international visitors, closed the land border to non-essential travel with the United States, which has become a global pandemic epicenter, and deployed military staff to hard-hit nursing homes.

Canadian deaths edged up eight to 8,798 according to government data late Tuesday, while the total number of cases grew by 331, to 108,486. By contrast, the United States recently set a one-day record in new cases with 60,500 as the national death toll rose to more than 135,000.

But health experts and politicians fret the sacrifices Canadians made could be imperiled as the economy moves to a full reopening including schools, especially in heavily populated central Canada, and as U.S. authorities struggle to contain the spread south of the border.

"Everyone is preparing for a potential spike in cases ... I think that's inevitable," said Dr. Isaac Bogoch, an infectious disease specialist at Toronto General Hospital.

"Opening up the economy is not a linear path. There will be setbacks (and) we will very likely have to reimpose public health restrictions in certain areas because of an unacceptable number of new cases."

Quebec's coronavirus cases are starting to rise and public health officials have tracked outbreaks to house parties and a suburban Montreal bar. In Ontario, an outbreak at a nail salon forced hundreds into quarantine while British Columbia, which has reported few new deaths in recent weeks, is seeing an uptick in cases as people expand their social circles.

"We did so much work to keep the number of cases down," said Alex Magdzinski, a Montreal nurse who treated COVID patients at a nursing home. "All healthcare workers are asking (people) is to put in a minimal effort."

Quebec has made wearing masks mandatory in indoor public spaces while other Canadian cities have enacted similar bylaws.

"We need only look south of the border to see how bad things could be," said Alberta Premier Jason Kenney on Monday, as he urged residents to "remain vigilant and disciplined" after large crowds gathered in parks and at a popular lake over the weekend.

Canadian provinces, most of them with right-leaning governments that normally oppose Liberal Prime Minister Justin Trudeau, have been working closely with Ottawa, in a coordinated approach to the outbreak.

In the U.S., the response has been politicized with Republican President U.S. Donald Trump attacking opponents at the state and city level. Critics also complained the White House did a poor job of helping distribute crucial equipment. [L2N2EL11N]

"They've been reckless. They moved forward too quickly," Ontario Premier Doug Ford told reporters on Tuesday as the province gears up for its third and final stage of reopening.

The two nations have banned non-essential land travel since mid-March but pressure is building on Trudeau from Canadian business leaders and U.S. lawmakers to loosen restrictions. Polls show a large majority of Canadians, and provincial leaders, want the border to remain closed.

This month, at least five incoming flights from cities in Florida, Texas and North Carolina had passengers with confirmed coronavirus cases aboard, according to Canadian government data.

"Don't get me wrong," said Ford. "I love the Americans. I don't want them up here right now."

(Additional reporting by Kelsey Johnson in Ottawa and Allison Martell and Moira Warburton in Toronto; editing by Diane Craft)