By Fathin Ungku and Joseph Sipalan KUALA LUMPUR (Reuters) - At least a dozen armed policemen entered the home of ousted Malaysian Prime Minister Najib Razak late on Wednesday after he returned from prayers at a mosque, Reuters witnesses said. State news agency Bernama said several dozen policemen were also seen at a luxury condominium in another district of the capital, Kuala Lumpur, where Najib has an apartment. There was no word on what operation was being carried out by the police, whose firearms appeared from a distance to be rifles. 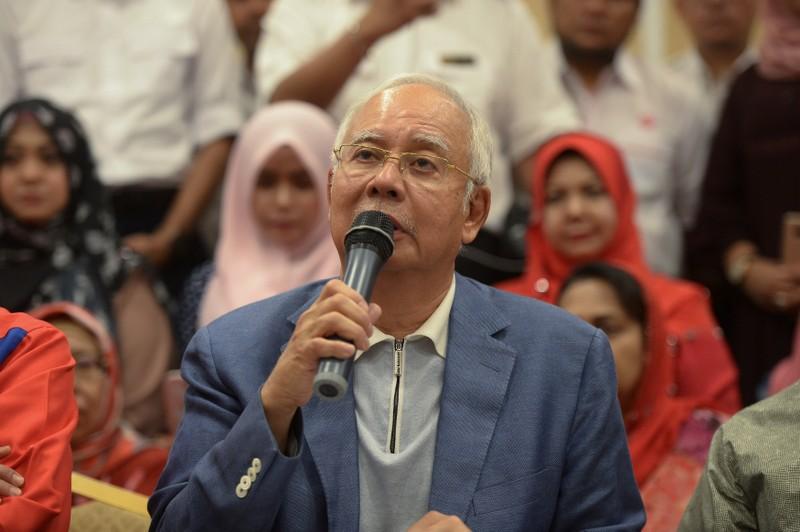 KUALA LUMPUR (Reuters) - At least a dozen armed policemen entered the home of ousted Malaysian Prime Minister Najib Razak late on Wednesday after he returned from prayers at a mosque, Reuters witnesses said.

State news agency Bernama said several dozen policemen were also seen at a luxury condominium in another district of the capital, Kuala Lumpur, where Najib has an apartment.

There was no word on what operation was being carried out by the police, whose firearms appeared from a distance to be rifles. A police spokeswoman could not be contacted for comment.

More than 100 journalists and onlookers were outside Najib's family home past midnight. The events were being streamed live on Facebook by local media and one account had attracted nearly 8,000 viewers.

Mahathir, 92, has said there is sufficient evidence to investigate a multi-billion-dollar scandal at state fund 1Malaysia Development Berhad (1MDB), which was founded by Najib.

Najib, once Mahathir's protege, has denied any wrongdoing.

The scandal is being investigated by police in at least six countries, including the United States.

Mahathir has replaced the attorney-general and officials at the anti-graft agency, in what appears to be a purge of people seen as close to the former premier.

Earlier on Wednesday, jailed reformist Anwar Ibrahim was granted a full pardon and freed, underlining the dramatic changes in the Southeast Asian country in the last seven days.

Anwar teamed up with Mahathir, his ally-turned-foe-turned-ally, to oust Najib. However, the relationship between the two remains volatile, and will largely determine what course Malaysia will chart in the coming months.

Anwar, 70, said he would like to take time off with his family and did not intend to join the cabinet any time soon. He said he would support the government led by Mahathir and Deputy Prime Minister Wan Azizah Wan Ismail, who is Anwar's wife.

"I've told Tun Mahathir, I don't need to serve in the cabinet for now," Anwar said, using an honorific for the prime minister.

Anwar was Mahathir's deputy in the 1990s but fell out with his mentor during the Asian financial crisis. He was sacked from the ruling party and founded the Reformasi (Reform) movement, challenging Mahathir's government. Within weeks, he was arrested and jailed on charges of sodomy and corruption.

Images at the time of a goateed, bespectacled Anwar in court with a black eye and bruises brought condemnation of Mahathir from around the world.

Anwar's trial became a spectacle, with prosecutors at one stage bringing out what they said was a semen-stained mattress allegedly used when he had sex with two male aides.

After being freed in 2004, Anwar was jailed a second time for sodomy in 2015, when Najib was in power.

Both times, he and his supporters said the charges were politically motivated.

Anwar told a news conference at his home on Wednesday that he had forgiven Mahathir, who was a pugnacious and uncompromising prime minister for 22 years from 1981.

"I and Mahathir have buried the hatchet already, it was a long time ago," Anwar said. "I have forgiven him, he has proved his mettle. Why should I harbour any malice towards him?"

The pardon, which enables Anwar to re-enter politics immediately, was granted on the grounds that there had been a miscarriage of justice.

Mahathir had promised during the election campaign that he would step down and let Anwar be prime minister if he won the poll, but said this week he planned to stay in the post for one or two years.

Mahathir is the leader of the ruling alliance the election and Anwar's People's Justice Party (PKR) won the majority of parliamentary seats in the group.

On Wednesday, Mahathir's government effectively abolished a goods and services tax that has been blamed for raising the cost of living for the poor and was a factor in the shock defeat of Najib's Barisan Nasional coalition, which had ruled Malaysia for six decades.

The new government has said it also planned to repeal a recently passed Anti-Fake News law and other laws seen as restricting press freedom.

Mahathir also seemed to be racing ahead with investigations into the 1MDB affair.

"It looks very likely that Najib will face the full force of the law," said Adib Zalkapli, a Kuala Lumpur-based analyst with risk consultancy Vriens & Partners. "Just last week nobody would have thought that this posh boarding school boy would be rear ended by his old political headmaster."