New York: Aral Sea - the giant lake between Kazakhstan in the north and Uzbekistan in the south - has dried up completely, says NASA.

In the early 1900s, the Aral Sea was the fourth largest lake in the world. 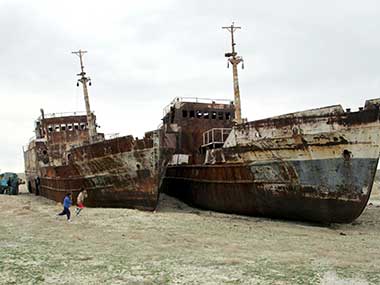 Children run past ruined ships abandoned in sand that once formed the bed of the Aral Sea. Reuters

Today, the vast lake - formed 5.5 million years ago in Central Asia - in the middle of the Kyzylkum desert has shrunk to a level where water is no more visible to the eyes, revealed a series of images from Nasa's Terra satellite.

A massive water diversion project begun by the Soviet Union in the 1960s caused it to shrink dramatically.

"It is likely the first time it has completely dried in 600 years since the diversion of the region's major river Amu Darya to the Caspian Sea," Philip Micklin from the Western Michigan University was quoted as saying in media reports.

According to NASA, this is happening because of low snowpack in the mountains that feed the lake.

Experts predict the giant lake will disappear completely by 2020.

According to the United Nations Environment Programme, more than 60 million people live in the Aral region - up fourfold since 1960.