Animation master Miyazaki retires: Here are five of his films you must watch

Hayao Miyazaki, the animation master from Japan, has hung up his director's hat and says he will no longer be making movies. He has said that he is first and foremost an animator and being a director is stressful. "You have to make all the judgments. It's not good for my stomach," Miyazaki said at a press conference announcing his retirement. 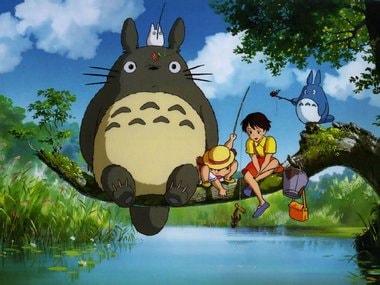 A still from My Neighbour Totoro

Miyazaki's movies, which rely heavily on hand-drawn art, are known for their vivid landscapes and attention to detail. They are beloved all over the world for their spirited characters, strong stories, as well as the themes of environment preservation and pacifism that run through them.

If you're new to his work, the five films listed below are a good place to start.

Spirited Away came out in 2001, a year after Miyazaki received accolades for Princess Mononoke. It's an Alice in Wonderland kind of story. Ten-year-old Chihiro is going with her family into the countryside, when they suddenly seem to lose their way into an abandoned amusement park. They come across a huge buffet, and after her parents stuff their faces, they turn into pigs.

Miyazaki based the film on his friend's ten-year-old daughter. When it was released, it became the most successful movie in Japan's history, and won the Academy Award for best animated feature.

Howl's Moving Castle released in 2004. Based on a novel by beloved children's author, Diana Wynne Jones, it's about 18-year-old Sophie who is transformed into an 80-year-old-woman because of a witch's curse. Although initially horrified by the transformation, ultimately it gives her a chance to be free of the self-consciousness that characterised her younger self. One of the best characters of the movie is Calcifer, a spirited talking blob of a fire which must be kept going at all times because if he gets extinguished, he dies. Though Roger Ebert classified it as one of Miyazaki's weaker films, others called it an "animated tour de force."

Princess Mononoke was one of Miyazaki's earlier hits, released back in 1997. The movie is a period drama set in the late Muromachi period (1337 to 1573), but with fantasy elements. A village is attacked by a demon and prince Ashitaka is able to slay it, but a curse ruins his right arm and gives him superhuman fighting ability but it's double-edged:  this curse will also eventually kill him.

Ashitake leaves his village to find a cure and gets caught up in a war between animal and man. He goes on to meet a girl named San, who believes she is a wolf and hates humans. It's one of Miyazaki's more violent films and features some gruesome fighting sequences. It has been interpreted by some as a story about the environment as told through Japanese parables.

Kiki's Delivery Service (released in 1989) is based on a children's book of the same name by children's author Eiko Kadono. Miyazaki said that through this movie, he was trying to explore the gulf between independence and reliance that exists in adolescent girls.

Kiki is a young witch who leaves her home and parents to train on her own for a year. Witches need a profession and she decides to start a delivery service with her broomstick. It's a sweet story without much conflict, other than what Kiki faces as she struggles to become independent. She is pursued by a local boy, goes into a temporary depression, and eventually regains her confidence.

Miyazaki was inspired by the real-life town of Visby in Sweden for the film's imaginary locale.

Released in 1988, My Neighbour Totoro tells the story of a professor's two young daughters and their interactions with the friendly wood spirits they find near their house. The movie is set in post-war rural Japan.

The girls find that their house is inhabited by tiny dust-like creatures called susuwatari. Eventually, Totoro appears to them when they are waiting for their father's bus. Totoro is a silent giant, wide-eyed and pudgy and mostly uses tiny leaves to  attempt to protect himself from the rain (it's a futile effort). Totoro even has a 'catbus' which he uses to transport the girls when a crisis arises.

Roger Ebert identified My Neighbor Totoro as one of his "Great Movies", calling it "one of the lovingly hand-crafted works of Hayao Miyazaki".