By Chris Kahn and James Oliphant NEW YORK (Reuters) - Many older Americans have turned away from President Donald Trump this year as the coronavirus ravages the country, eroding an important Republican support base that helped propel him into the White House in 2016, Reuters/Ipsos polling data shows. 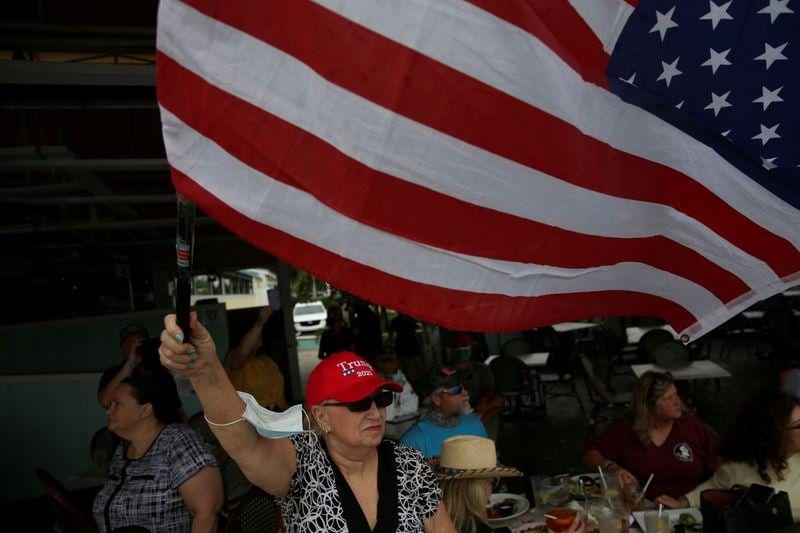 By Chris Kahn and James Oliphant

ravages the country, eroding an important Republican support base that helped propel him into the White House in 2016, Reuters/Ipsos polling data shows.

Trump and his Democratic opponent Joe Biden now split American voters aged 55 years and older almost evenly: 47% say they are voting for Biden on Nov. 3 while 46% back Trump, according to Reuters/Ipsos national surveys in September and October.

That could be an alarming sign for the president, who trails Biden with 25 days to go before the election.

Republicans have relied on the support of older Americans in national elections for years, routinely benefiting from a demographic that consistently shows up in force on Election Day.

Trump won the 55-plus age group by 13 percentage points in 2016, according to exit polls. Mitt Romney, the Republican presidential nominee in 2012, achieved the same margin.

Reuters/Ipsos state polls also show Biden outperforming Hillary Clinton, the 2016 Democratic presidential nominee, among older voters in a handful of battleground states, where seniors make up an outsized proportion of the electorate.

Winning those states will be critical to the outcome of the 2020 race: whoever takes the most battleground states will be on track to win the Electoral College and the White House.

Biden is beating Trump among older voters in Wisconsin by 10 points and drawing about the same amount of support as Trump is with that demographic in Pennsylvania, Michigan, Florida and Arizona, according to the state polls conducted in mid-September and early October.

Four years ago, Trump won older voters in each of those states by 10 to 29 points.

cases and deaths in the country - nearly 7.6 million cases and more than 210,000 deaths - on "poor leadership and policy decisions from President Trump," the polls show.

Randy Bode, 59, a Republican in Douglas, Arizona, who voted for Trump in 2016, said he was disappointed with Trump's suggestion that people could protect themselves from COVID-19

"He shouldn't be saying the things he's saying" about the coronavirus

Bode, who is now undecided, is also concerned about Trump's efforts to repeal the Affordable Care Act and how that would leave millions of Americans without health insurance during a health crisis.

"He's had four years to come up with a plan, and he hasn't done it," he said.

swept the country, closing thousands of businesses and overwhelming the health care system that seniors rely on more than others.

, up 12 percentage points from May. And Trump's net approval for his response to the virus dropped among all Americans to its lowest level since Reuters started asking the question in early March.

Among older Americans, 83% were concerned about the threat that the coronavirus

poses to their personal health and safety.

“Seniors were much more worried about COVID than younger Americans,” said Alex Conant, a Republican strategist whose firm has spotted a similar trend in its polling data.

Trump’s campaign has been working to stop the bleeding, and last weekend he dispatched Vice President Mike Pence to campaign at The Villages, the conservative retirement community in central Florida.

On Thursday, while still convalescing at the White House from his recent coronavirus

infection, the president addressed America's seniors in a video, calling them his "favorite people in the world" and pledging to make new virus-fighting drugs available to them for free.

“You are vulnerable and so am I,” Trump said. “We’re going to take care of our seniors.”

The Trump campaign pointed to an executive order he signed last year aimed at bolstering Medicare, the national insurance program for Americans 65 and older.

“President Trump and his administration remain laser-focused on protecting our most vulnerable citizens, including our nation’s senior citizens,” said Ken Farnaso, a Trump campaign spokesman.

Biden is also pitching directly to older voters, particularly in Arizona and Florida.

His campaign has been running ads featuring a Florida couple who can't see their grandchildren because of the pandemic. Other ads have focused on Trump’s threat to eliminate the payroll tax, which funds Social Security.

Conant said Trump needs to figure out how to bring seniors back into the fold - and fast.

“It’s crucial,” he said. “Trump will not win without strong support from senior voters.”