By Adam Jourdan and Pei Li SHANGHAI/BEIJING (Reuters) - A Chinese vaccine scandal has laid bare a new challenge Beijing faces in its long-running battle for information control: blogs and online articles by independent writers capable of unleashing a storm of public fury. The outrage over safety lapses by Changsheng Bio-technology Co Ltd in some of its vaccines for children came six days after the issue was flagged in regulatory filings, triggered instead by a July 21 article posted on the popular WeChat messaging platform 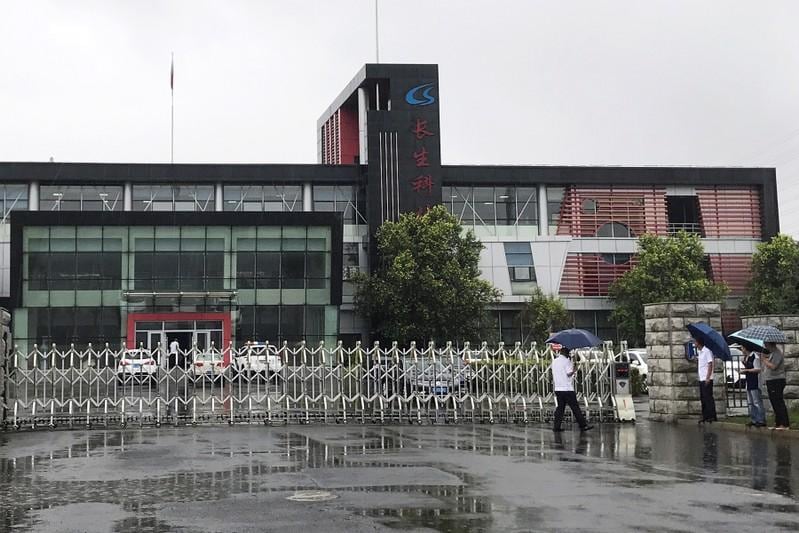 By Adam Jourdan and Pei Li

SHANGHAI/BEIJING (Reuters) - A Chinese vaccine scandal has laid bare a new challenge Beijing faces in its long-running battle for information control: blogs and online articles by independent writers capable of unleashing a storm of public fury.

The outrage over safety lapses by Changsheng Bio-technology Co Ltd <002680.SZ> in some of its vaccines for children came six days after the issue was flagged in regulatory filings, triggered instead by a July 21 article posted on the popular WeChat messaging platform.

Titled "Vaccine King" and posted to a WeChat account managed by former journalists, it critiqued business practices by Changsheng's chairwoman and was read tens of thousands of times before being deleted the next day. Even then, myriad links and copied versions circulated on China's internet. Some netizens even used blockchain technology to preserve the story.

The enormous impact of the so-called "zi meiti", or "self-media" article marks a threat to efforts by China's ruling Communist Party to tighten its grip over content online.

"This is a guerrilla war. The government cannot tackle it just like it does traditional media," said Fang Kecheng, a Chinese media researcher at the University of Pennsylvania, adding that while one zi meiti account could be shut down, many others would spring up in its place.

The article touched a nerve in a country already scarred by a long history of drug and food scandals. A day later Chinese social media was ablaze.

Mentions of "Changsheng" hit close to 100 million that day, according to a WeChat index that tracks popular key words, a 2,500 percent rise versus the day before. One hashtag conversation about the scandal on popular microblog site Weibo has now been read over 820 million times.

For Shenzhen-listed Changsheng, judgement was swift.

Authorities launched multiple investigations, its chairwoman and 14 other people have been detained by the police and President Xi Jinping has called the scandal "vile and shocking".

The company, which has publicly apologised, has lost $1.9 billion or more than half of it market value since mid-July, and has flagged that it could be delisted.

"The vaccine scandal came out a week ago and there was just a fine of several hundred thousand. After the 'Vaccine King' spread, 15 people including the boss have been detained," one person wrote on Weibo.

"The impact of just one article is pretty scary."

The WeChat account that posted the story is one of many zi meiti groups not affiliated with a media organisation. It is known for controversial coverage of China's property firms, the stock market and acquisitive conglomerates. Its articles are not bylined, carrying only the name of the group, Shou Ye. Writers earn money through voluntary donations from readers.

For China, keeping a tight grip on the flow of information is seen as key to maintaining social stability in the world's most populous nation.

As the scandal unfolded, many on social media initially complained their critical posts were being taken down. Later, however, it seemed China's censors - who play a constant role regulating the country's internet - had loosened the reins.

Some people took the opportunity to dig into the firm's and the chairwoman's past. There were even fake posts pretending to be U.S. President Donald Trump.

"It is UNFAIR and DISGRACEFUL that our great American pharmaceutical companies are excluded from Chinese market, where dozens of lives could be saved. UNJUST. THIS MUST CHANGE!" said one parody circulating on WeChat.

The tension, however, between allowing a free and unruly discourse and a censorship apparatus that routinely monitors and controls topics, was not far from the surface.

An editorial by the state-run Global Times on Monday warned there were "destructive forces" looking to "stir up havoc" and that if online discourse was left uncontrolled, the country could be led towards chaos.

For Chinese citizens who shed light on scandals, especially on sensitive medical safety issues that could flare up and lead to social unrest, consequences can be harsh.

Lawyers Tang Jingling and Yu Wensheng, who represented parents in separate vaccine scandals, are currently in jail. Journalist Wang Keqin was removed from his post in 2011 after writing about a case involving mishandled vaccines.

When criticism is allowed, it is also often vetted, human rights experts said.

"Amid the current scandal, while netizens are free to condemn the drug company, news articles and social media posts that showed the Chinese government in a critical light continue to be censored," Sophie Richardson, China Director of Human Rights Watch, wrote in a post.

The rise of self-media, however, has created a new dynamic.

Media researcher Fang said Chinese authorities could now look to make their own use of zi meiti, having seen its impact.

"What people should be alarmed about is that after realising how powerful this medium is, the government might use it as a propaganda tool itself," he said.

(Reporting by Adam Jourdan in Shanghai and Pei Li in Beijing; Additional reporting by Shanghai newsroom; Editing by Edwina Gibbs)