By Parisa Hafezi and Arshad Mohammed DUBAI/WASHINGTON (Reuters) - Joe Biden plans to scrap what he calls the 'dangerous failure' of President Donald Trump's maximum pressure policy on Iran should he win the U.S. election, but after years of confrontation his diplomacy-first approach to a historic Middle East foe could prove an unforgiving challenge. 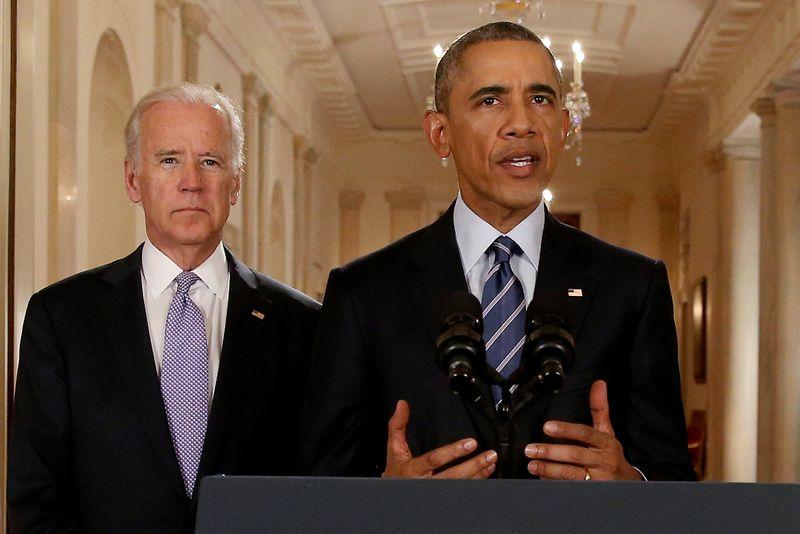 By Parisa Hafezi and Arshad Mohammed

DUBAI/WASHINGTON (Reuters) - Joe Biden plans to scrap what he calls the "dangerous failure" of President Donald Trump's maximum pressure policy on Iran should he win the U.S. election, but after years of confrontation his diplomacy-first approach to a historic Middle East foe could prove an unforgiving challenge.

Vice president under President Barack Obama when Iran's 2015 nuclear deal with six powers was struck, Biden has pledged that if Tehran resumes compliance with the pact he will return to the agreement, which Trump quit in 2018, reimposing sanctions.

With Iran's economy crippled, its ties with Washington have been at boiling point ever since, and an international consensus over Iran's nuclear work -- which the West suspected was aimed at creating a nuclear bomb -- has been in disarray.

The pressure on Iran's leaders to escape from sanctions is severe. Their core support comes from poorer Iranians struggling to survive as the price of bread, cooking oil and other staples has soared and the rial currency has plummeted.

The coronavirus has only compounded the pressure. The Iranian media regularly report layoffs and strikes by workers who have not been paid for months.

But among the obstacles facing Biden, a Democrat, in his bid to reopen a pathway to detente are Iran's mistrust of Washington, which deepened sharply when Trump tore up the deal.

"Why should we trust Biden? He is like Obama. You cannot trust Democrats," said a hardline official close to the office of Supreme Leader Ayatollah Ali Khamenei, adding Trump might eventually offer a better deal than the abandoned 2015 accord.

Both Trump and Biden have yet to detail how they plan to persuade Iran to go along with their respective approaches.

Trump has said he wants to strike a new deal with Tehran that would address Iran's missile programme and support for regional proxies in Iraq, Syria, Lebanon and Yemen.

For his part, Biden's idea appears to be a return to the 2015 deal as a prelude to a wider talks on Iran's nuclear work, its ballistic missiles and regional activities.

However, returning to the original deal is not a simple matter.

Among the complexities are Iranian demands for compensation for damages it suffered following Trump's restoration of nuclear-related sanctions; Tehran's likely demand for the removal of other, non-nuclear U.S. sanctions imposed since May 2018; and the time and money it would take to disassemble and store centrifuges that it has re-installed, including at its Fordow nuclear complex, where uranium enrichment was barred under the nuclear deal.

"Aside from returning to the deal, the next U.S administration should compensate Tehran for the damages during the withdrawal ... and of course make commitments to ensure that such violations are not repeated," Iran's government spokesman Ali Rabeie told reporters on Tuesday.

Iran's leadership has ruled out halting its missile programme or changing its regional policy, although it said last year it had no plans to increase the range of its missiles. Tehran says it will negotiate only if Washington lifts sanctions.

While Iranians' economic misery places pressure on Tehran to negotiate an easing of the sanctions, the Iranian electoral calendar means any deal is unlikely to come quickly.

Iranian officials say any talks would have to take place after Iran's presidential elections in mid-2021, which anti-U.S. security hawks are expected to win.

"If Biden wins, talks will start after Iran's presidential election. It will give hardliners some space to secure their election win," one Iranian government official said.

"Not much compromise should be expected from Iran's side," said an Iranian security official. "If Biden wins, don't expect too much bargaining room from (Khamenei)."

While Iranian leaders have refrained from publicly endorsing either man, some officials suggest hardliners loyal to Khamenei would prefer to deal with Trump rather than Biden.

That is not only because Iran feels it can handle Trump's transactional, business-minded approach to diplomacy.

It is also because the hostility he evokes among Iranians could be used by hardliners in elections to reinforce their political position as the nation's valiant defenders.

"All these issues can be negotiated and resolved. Tehran needs sanctions to be lifted and Americans want a calm Middle East. A win-win solution can be reached. When there is a will, there is a way," the Iranian security official said.

"But it will be easier with Trump. He is a businessman and does not want problems during his second term."