Beijing: Amid the Sikkim standoff, National Security Advisor Ajit Doval arrived in Beijing on Wednesday to attend BRICS top security officials meeting during which he is expected to hold talks with China's state councilor Yang Jiechi to resolve the issue. 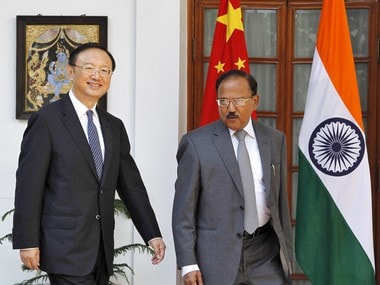 Doval will take part in the Brazil, Russia, India, China, South Africa (BRICS) NSAs meeting in Beijing which is due to take place on 27-28 July.

His visit has raised expectations about the likelihood of India and China finding a way-out of the over a month-long standoff at Doklam area in Sikkim sector.

As per the official programme, Doval will also call on Chinese president Xi Jinping on Friday along with fellow top security officials of the BRICS countries.

The group of NSAs would call on the Chinese president for an interaction on security issues relating to BRICS countries. The BRICS NSAs meeting is being hosted by Yang.

Both Doval and Yang are special representatives of the India-China border mechanism.

Ahead of his meeting with Xi, Doval is expected to hold separate talks with Yang to discuss resolution of the standoff at Doklam in Sikkim sector.

Though China continued to maintain that there won’t be a meaningful dialogue without the unconditional withdrawal of Indian troops, the Chinese foreign ministry has hinted of a bilateral meeting between Doval and Yang which is part of the tradition of BRICS NSAs meeting.

Both sides acknowledged talks through diplomatic channels to ease tensions.

Chinese and Indian troops have been locked in a face-off in the trijunction area for more than a month since Indian troops stopped the Chinese army from building a road in the area.