Washington: US president Donald Trump confirmed that he will travel in November to China, South Korea and Japan as part of his Asia tour, media reports said.

Trump on Thursday did not rule out also visiting Vietnam to attend the Asia-Pacific Economic Cooperation Forum and his team is still considering whether he will attend the Association of Southeast Asian Nations (ASEAN) summit in The Philippines, Efe news reported.

When asked about the Asia trip by reporters accompanying him on Air Force One on his visit to Florida to view damage from Hurricane Irma, Trump confirmed the trip despite the rising tensions with North Korea.

He said he would "probably" to go China, Japan and South Korea in November and "possibly" attend the APEC summit in Vietnam, adding that Filipino President Rodrigo Duarte had invited him to the ASEAN summit, about which Trump said "we're going to see" whether or not he will attend. 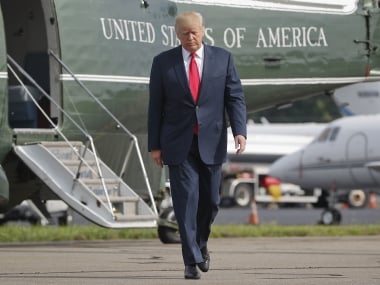 The mogul did not want to discuss his strategy regarding the tense and volatile situation with Pyongyang, but he said that the people of the US are "very safe".

His negotiating strategy, however, seems to involve China, with which he said he has "a great relationship", as well as with that country's president, Xi Jinping.

However, the president said he did not want to tell reporters what the US and China are currently working on to deal with the North Korea's nuclear ambitions and its possible threat to the region and even to US territory.

At the beginning of this month, North Korea conducted its sixth atomic test, the most powerful to date, using a thermonuclear device — allegedly a hydrogen bomb — which Pyongyang said it could install on the intercontinental ballistic missiles it has been testing in recent months.

The intensification of weapons testing by North Korea, which also this month launched a missile that overflew northern Japan before landing in the Pacific, has brought condemnation from the international community and the threat of an arms race in the region.

In response, the South Korean army has staged live-fire military exercises and joint maneuvers with the US to demonstrate its strength and resolve.