BEIRUT (Reuters) - Air strikes have been stepped up against rebel-held northwestern Syria, the last major bastion of opponents of President Bashar al-Assad, prompting thousands of civilians to flee the town of Khan Sheikhoun, war monitors said on Tuesday. The area near the Turkish frontier is under a ceasefire brokered last year by Assad's main battlefield ally Russia, and Turkey, one of the main supporters of rebels who have fought to topple him for eight years 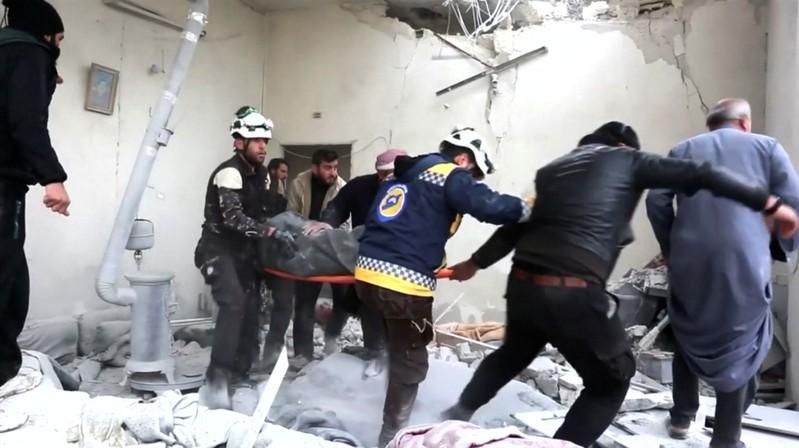 BEIRUT (Reuters) - Air strikes have been stepped up against rebel-held northwestern Syria, the last major bastion of opponents of President Bashar al-Assad, prompting thousands of civilians to flee the town of Khan Sheikhoun, war monitors said on Tuesday.

The area near the Turkish frontier is under a ceasefire brokered last year by Assad's main battlefield ally Russia, and Turkey, one of the main supporters of rebels who have fought to topple him for eight years.

Hundreds of thousands of people who fled other parts of Syria are sheltering in the enclave, protected by the truce which was aimed at averting an all-out government assault. Any suggestion that the ceasefire is under new strain is closely watched by the warring parties and their allies.

Rami Abdulrahman, the director of the British-based Syrian Observatory for Human Rights, said government forces had intensified artillery shelling and air strikes, which have been ramping up over the past 10 days.

"The bombing is focused mainly on towns along the Damascus-Aleppo international road," he said. "Khan Sheikhoun has turned into a ghost town."

The 'White Helmets' rescue organisation that operates in opposition areas of Syria said five people were killed by shelling and air strikes on Tuesday, including three children.

According to a senior data analyst at Hala Systems, which operates an early warning system for aerial bombardment called Sentry, 13 strikes had been observed in Idlib and northern Hama on Tuesday.

"This is the third straight day in which a significant increase in air strikes has been observed. The pace of attacks seems high — and certainly unusual compared to the last few months," the analyst, who declined to be identified, told Reuters.

Syrian state media said insurgents had fired rockets at several towns in the northern part of Hama province, killing one civilian and wounding seven others in what it said was a violation of the ceasefire.

Under the agreement brokered by Russia and Turkey, the enclave in the northwest includes a demilitarised zone that must be kept free of all heavy weapons and jihadist fighters.

Moscow has complained about escalating violence in Idlib and said that militants who used to belong to the Nusra Front, Syria's former chapter of al Qaeda, are in control of large swathes of territory.

Syria's conflict began in 2011 after Assad's security forces used force to crush mass demonstrations against his rule. Hundreds of thousands of people have been killed and millions displaced in the conflict, which has drawn in world powers.