Washington: The US has declared separatist group Balochistan Liberation Army (BLA), which is fighting Pakistani rule in the restive Balochistan province, as a terrorist organisation, weeks after it attacked a five-star hotel in the port city of Gwadar. Pakistan in 2006 banned the outfit and have been urging the US to do the same.

"The BLA is an armed separatist group that targets security forces and civilians, mainly in ethnic Baloch areas of Pakistan," the State Department said on Tuesday. The department made it a crime for anyone in the US to assist the BLA militants and freezing any US assets they may have. 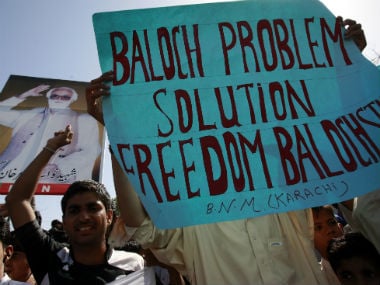 The outfit has carried out several terrorist attacks in the past year, including a suicide attack in August, 2018 that targeted Chinese engineers in Balochistan, a November, 2018 attack on the Chinese consulate in Karachi, and a May 2019 attack against a luxury hotel in Gwadar, it added. In May this year, five people, including a Pakistani soldier, were killed after BLA gunmen stormed a five-star hotel in the port city of Gwadar. Welcoming the US' move, Pakistan said it hope that the action will ensure that the BLA's space to operate is minimised.

It is important that the perpetrators, organisers, financers and external sponsors including those glorifying these acts of terror against Pakistan are held accountable and brought to justice," the Pakistan Foreign Office said in a statement in Islamabad. BLA spokesperson Jiyand Baloch in a statement called the US move "unjustified".

"The BLA is a moderate, secular and an armed defence organisation. The BLA is resisting on its motherland against foreign intruders to protect its people. The international laws allow any person or nation to act in self defence. US State Department's ban on BLA is beyond comprehension and unjustified," he said in a statement. Meanwhile, the US also sanctioned Hezbollah operative Husain Ali Hazzima, chief of the Beirut-based terrorist group's intelligence unit. It also updated its sanctions list to reflect a name change of the Iranian Sunni Muslim terrorist group Jundallah to Jaysh al-Adl.

Jundallah, which was designated as a foreign terrorist organisation in 2010, began using the new name Jaysh al-Adl and associated aliases in 2012, the state department statement said. Since its inception, the group has engaged in numerous attacks that have killed scores of Iranian civilians and government officials, including a February 2019 suicide bombing and an October 2018 kidnapping of Iranian security personnel, it said.