After slapping incident, pope kisses nun who vows not to bite 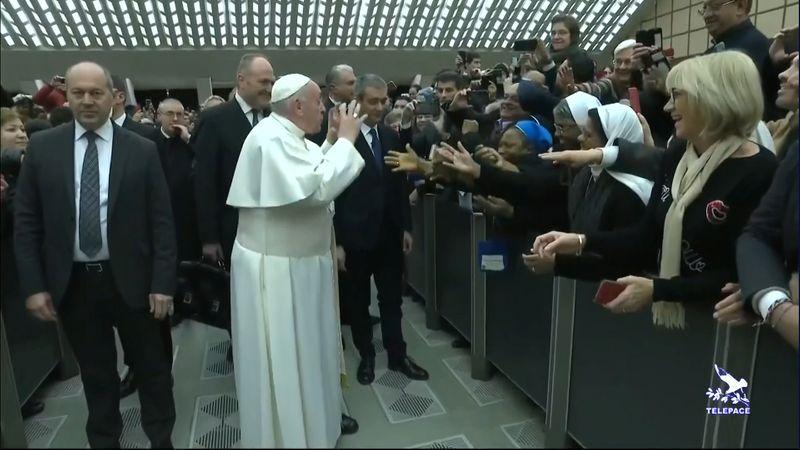 VATICAN CITY (Reuters) - Pope Francis, who last month angrily slapped the hand of a woman who yanked him toward her, gave a light-hearted reaction more typical of his papacy on Wednesday when a nun asked him for a kiss. He said yes, although only after she promised not to bite him.

The good-natured exchange took place at the start of Francis' weekly general audience. As he was walking into the large hall where thousands of people were waiting, an excited nun asked if he would kiss her, shouting in Italian "Bacio, Papa!" (A kiss, pope!)

Francis responded: "Oh, (but) you bite!", prompting laughter from the people near them.

Then Francis joked: "Stay calm! I will give you a kiss but you stay calm. Don't bite!"

The diminutive nun promised, saying "Si" (Yes). He then kissed her on the right cheek, leaving her even more ecstatic than before. She jumped up and down shouted "Grazie, Papa". (Thank you, Pope).

On New Year's Eve, Francis, 83, angrily slapped a woman’s hand after she hold of him and forcefully yanked him toward her in St. Peter's Square.

The video of that incident went viral on social media and the next day Francis apologised, saying he had set a “bad example”.

Francis, unlike some of his predecessors, is usually very informal with well wishers at such non-religious events, stopping to kiss babies, bless the handicapped, and allowing hundreds of people to touch his hand.

But he frowns on allowing people to kiss his hand at large events, saying he does not want that gesture of reverence to spread germs.

Last month's slapping incident was an exceptional one. It was similar to another several years ago when Francis chastised an over-exuberant woman who had pulled him so hard he nearly fell onto a person in a wheelchair.