By Maria Tsvetkova MOSCOW (Reuters) - Anti-Kremlin protester Filipp Kuznetsov was detained in Moscow on Saturday and found guilty by a court on Monday of taking part in an illegal protest. But it was only late on Wednesday that the authorities were able to find a jail cell for him. 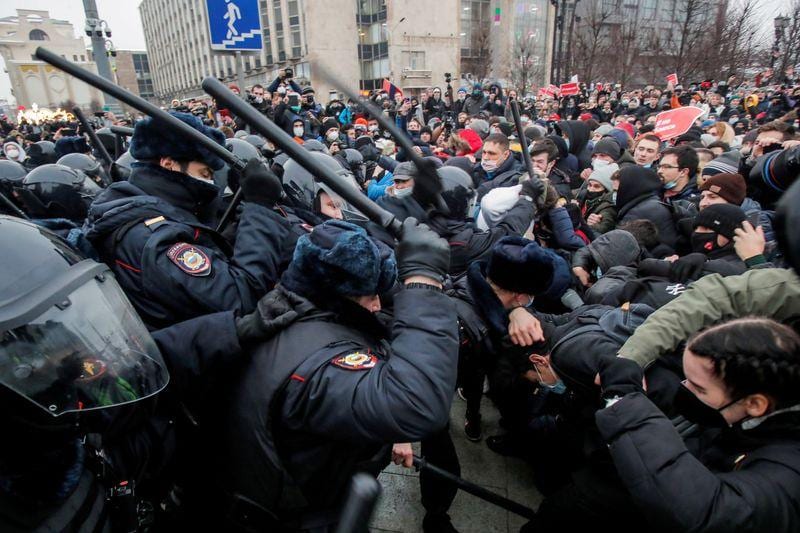 MOSCOW (Reuters) - Anti-Kremlin protester Filipp Kuznetsov was detained in Moscow on Saturday and found guilty by a court on Monday of taking part in an illegal protest. But it was only late on Wednesday that the authorities were able to find a jail cell for him.

After arresting what one monitoring group said was a record number of protesters at weekend rallies demanding Kremlin critic Alexei Navalny be freed from jail, Moscow police appear to be struggling to find enough space in detention facilities.

Tens of thousands of protesters took to the streets across Russia on Saturday to demand the release of Navalny, who was arrested at a Moscow airport this month after flying home for the first time since being poisoned with a nerve agent.

Kuznetsov, a 28-year-old entrepreneur, was arrested on Saturday near the prison housing Navalny. A court on Monday sentenced Kuznetsov to 10 days in jail for taking part in the protests, deemed illegal because they had not been pre-sanctioned by the authorities.

"I'm sitting in a police bus because there is no space in the jails," Kuznetsov told Reuters by phone on Wednesday afternoon.

He said he knew Moscow's jails were full from policemen who had guarded him and 17 other protesters in a police bus overnight outside a jail that had refused to accept them because it was full.

Kuznetsov messaged later on Wednesday to say the police had eventually found a prison for him after driving from jail to jail for more than 16 hours.

The policemen guarding him and the others had allowed volunteers to bring food while they were waiting in the bus and had sometimes escorted them to the nearby jail to use the bathroom, Kuznetsov said.

By the time he got to jail, he said he had not slept for over 30 hours.

"Free people don't get tired. We support each other," he said.

The Moscow police department did not respond to a request for comment.

The OVD-info protest monitoring group, which counts arrests one by one and offers legal support, said police on Saturday detained nearly 4,000 people at protests across Russia, over 1,500 of them in Moscow.

It said it had compared the figures with the number of arrests counted at previous protests, and found both were record figures for President Vladimir Putin's long rule.

"The number of people arrested after the rallies was really big and there is no space for them in Moscow jails," said Grigory Durnovo, an OVD-info analyst.