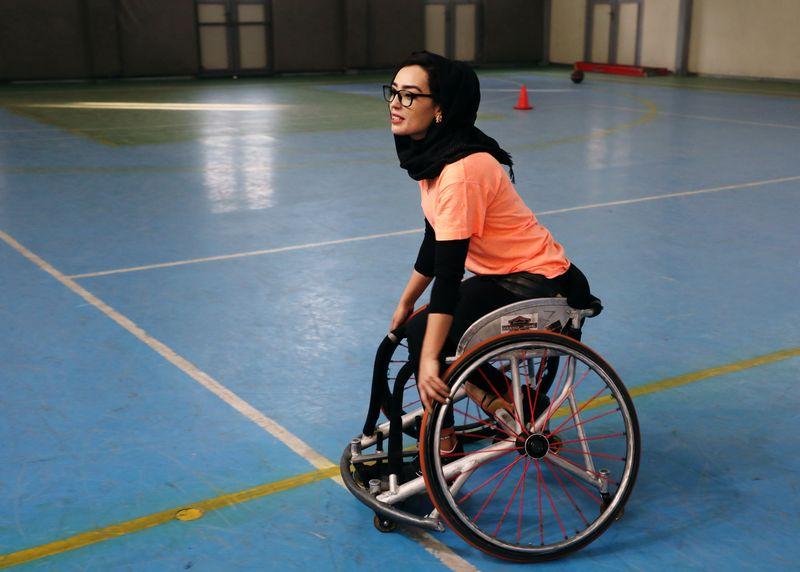 KABUL (Reuters) - One of thousands of Afghans badly injured during years of conflict, Nilofar Bayat hopes for peace so that her wheelchair basketball team can take part in the Paralympics but fears a return to power by the Taliban could quash her dreams.

Bayat, now 26, suffered a spinal cord injury at the age of two when a rocket hit her house, killing her brother. Her injury limited her ability to run or jump but has not deterred her from studying, getting a job and pursuing her love of basketball.

"I hope Afghanistan's situation gets better, so I can train with a relaxed mind, doing my work, and having a better life," Bayat said following a practice match with her teammates at a gymnasium in Kabul.

"I hope to see the development of my team... I hope we can go to the next Paralympics," said Bayat, a law school graduate who now works as a data entry operator.

She began playing basketball with a team organised by the International Committee of the Red Cross (ICRC) eight years ago.

Life is particularly difficult for people with physical disabilities in Afghanistan, where they face social stigma as well as inaccessible streets and buildings, and a lack of rehabilitation and health facilities. The ICRC says up to 1.5 million people are disabled in the country, many due to 18 years of war.

"It is tough for a woman, especially if she has a disability, to live in Afghanistan. People see disability as a defect for women... which hurts disabled girls a lot," Bayat said.

Bayat said taking up wheelchair basketball had helped build up her confidence. Her team has taken part in international competitions in Indonesia and Thailand, winning three medals in the process.

But she expressed concern about a possible return to power by the hardline Islamist Taliban, who banned women from education, work or leaving the house without a male relative during their 1996-2001 rule.

The United States and the Taliban are due to sign an agreement on Feb. 29 at the end of a planned week-long "reduction in violence" in Afghanistan, stirring fresh hopes for an end to the protracted conflict.

"I have a terrible memory of the Taliban era because I became disabled during the Taliban era, an event that completely changed my life, and I always think about what I will do in the future if something stops my basketball and activities," said Bayat.

"That is one of the biggest concerns for me and the girls here," she said.