(Reuters) - Politicians and activists voiced an outpouring of grief and appreciation for U.S. Representative John Lewis, who died on Friday of pancreatic cancer at age 80 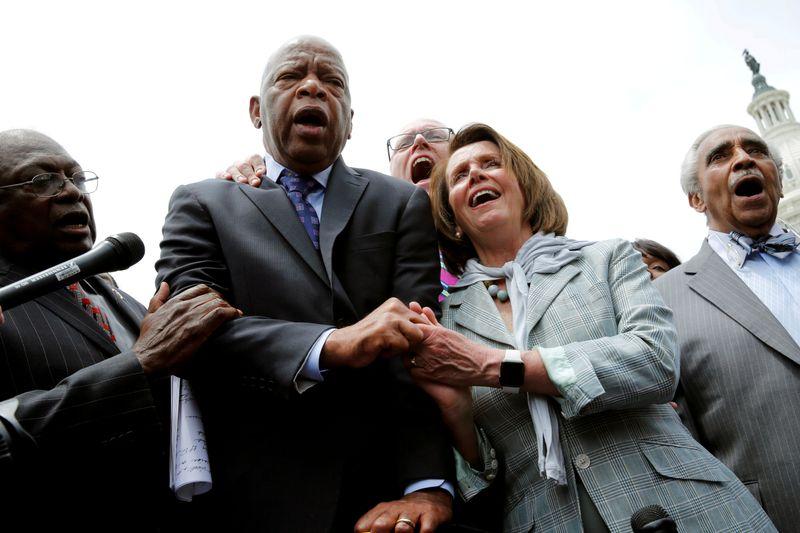 (Reuters) - Politicians and activists voiced an outpouring of grief and appreciation for U.S. Representative John Lewis, who died on Friday of pancreatic cancer at age 80.

Here are some of their quotes:

"He loved this country so much that he risked his life and his blood so that it might live up to its promise. And through the decades, he not only gave all of himself to the cause of freedom and justice, but inspired generations that followed to try to live up to his example."

"Farewell, sir. You did, indeed, fight the good fight and get into a lot of good trouble. You served God and humanity well. Thank you. Take your rest."

"Congressman John Lewis was a great man whose courage and decades of public service changed America forever, and he will be deeply missed. John Lewis will be remembered as a giant of the civil rights movement whose selflessness and conviction rendered our nation into a more perfect union and his example will inspire generations of Americans."

"John’s life reminds us that the most powerful symbol of what it means to be an American is what we do with the time we have to make real the promise of our nation – that we are all created equal and deserve to be treated equally. For parents trying to answer their children’s questions about what to make of the world we are in today, teach them about John Lewis. For the peaceful marchers for racial and economic justice around the world who are asking where we go from here, follow his lead."

"As a young man marching for equality in Selma, Alabama, John answered brutal violence with courageous hope. And throughout his career as a civil rights leader and public servant, he worked to make our country a more perfect union. America can best honor John's memory by continuing his journey toward liberty and justice for all."

"John Lewis gave all he had to redeem America’s unmet promise of equality and justice for all, and to create a place for us to build a more perfect union together."

"John Lewis was a titan of the civil rights movement whose goodness, faith and bravery transformed our nation – from the determination with which he met discrimination at lunch counters and on Freedom Rides, to the courage he showed as a young man facing down violence and death on Edmund Pettus Bridge, to the moral leadership he brought to the Congress for more than 30 years."

"The Senate and the nation mourn the loss of Congressman John Lewis, a pioneering civil rights leader who put his life on the line to fight racism, promote equal rights, and bring our nation into greater alignment with its founding principles."

Alabama Governor Kay Ivey"Our country has lost one of its most beloved Civil Rights leaders. I join my fellow Alabamians and the nation in mourning the death of Rep. John Lewis. He dedicated his life to serving his community and advocating for others. We’ll forever remember his heroism and his enduring legacy."

"Our conscience, he was a griot of this modern age, one who saw its hatred but fought ever towards the light... And never once did he begrudge sharing its beauty. I loved him & will miss him.”

"John Lewis was an icon who fought with every ounce of his being to advance the cause of civil rights for all Americans. I'm devastated for his family, friends, staff - and all those whose lives he touched."