By Tom Balmforth MOSCOW (Reuters) - The young violinist holding a sign reading 'Strike for Climate' on a Moscow square didn't have long to wait for the police to arrive. His one-man protest lasted just 30 minutes before he was detained this summer for the second Friday in a row. The city's COVID-19 lockdown is now over but protests remain illegal, presenting a new challenge for Arshak Makichyan's mission to build a movement from scratch to pressure the government of the world's fourth-largest greenhouse gas emitter. 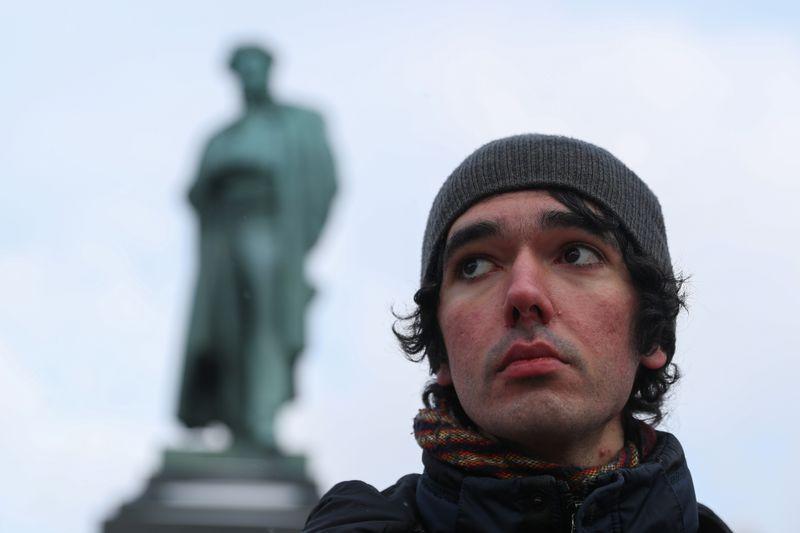 MOSCOW (Reuters) - The young violinist holding a sign reading "Strike for Climate" on a Moscow square didn't have long to wait for the police to arrive. His one-man protest lasted just 30 minutes before he was detained this summer for the second Friday in a row.

The city's COVID-19 lockdown is now over but protests remain illegal, presenting a new challenge for Arshak Makichyan's mission to build a movement from scratch to pressure the government of the world's fourth-largest greenhouse gas emitter.

Inspired by Greta Thunberg in late 2018, he stages political protests every week.

But unlike the Swedish teenager, who has galvanised a global movement of young environmentalists, Russia's tough protest laws and people's general apathy towards activism has made the 26-year-old's campaign a lonely one.

Makichyan has often been the only activist to turn out. Last year, he was jailed for six days for leading a three-person protest which city officials did not authorise. Once a passer-by threatened to stab him for holding up his sign.

"Fear rises up every time something happens, but I have to do something with that because in any case you understand that our future is under threat," he said. "I know we can have an impact on the situation so of course I'm not going to give up.

"The climate crisis is under way in Russia ... There are constantly ecological disasters in various regions. The government is doing nothing."

Temperatures hit record highs in the Arctic this summer and contributed to huge wildfires in Siberia. A Russian mining company blamed a major fuel spill in May on melting permafrost it said had eroded its fuel tank's foundations.

President Vladimir Putin has said Russia is warming at 2.5 times the world average and that it would be a disaster if the permafrost melts in its northern cities. But he has also said it is unclear what is driving climate change.

Russia, a major energy exporter, belatedly joined the 2015 Paris Agreement on climate change last September, and Makichyan said its goals were so modest it could actually increase emissions and still meet the targets.

The Energy Ministry told the Izvestia newspaper in July that Russia had already fulfilled its obligations to cut emissions under the Paris accord.

Just over a third of Russians see climate change as the world's most serious looming problem, but only 7% see it as a major problem for Russia itself, according to polling data published by the Moscow-based Levada Centre last December.

Makichyan shelved plans to continue his music studies at a prestigious school in Germany, deciding to be an activist instead. He began organising Thunberg's movement in Russia in 2019 and has held weekly protests since March last year.

He initially lived on the savings he set aside for a new violin, and now works as a grocery courier and lives at home with his parents.

Makichyan fears a poor turnout in Russia for this Friday's global climate strike protests to demand urgent action, due to the pandemic and the government's tough stance on protests.

Authorities say that all street protests are illegal because of the health risks posed by the pandemic.

"Our movement isn't in the best shape because people are scared of taking part in pickets," he said. "Now the authorities are using the pandemic as a pretext to stop any form of activism."