A new generation takes up the hunt for Dead Sea Scrolls

By Rinat Harash and Ari Rabinovitch QUMRAN, West Bank (Reuters) - In the cliffs high above the Dead Sea archaeologists chip away with pick axes, hoping to repeat one of the most sensational discoveries of the last hundred years - the finding of the Dead Sea Scrolls. The scrolls, a collection of manuscripts, some more than 2,000 years old, were first found in 1947 by local Bedouin in the area of Qumran, about 20 km east of Jerusalem. They gave insight into Jewish society and religion before and after the time of Jesus, and spurred a decade of exploration, before the search fizzled. 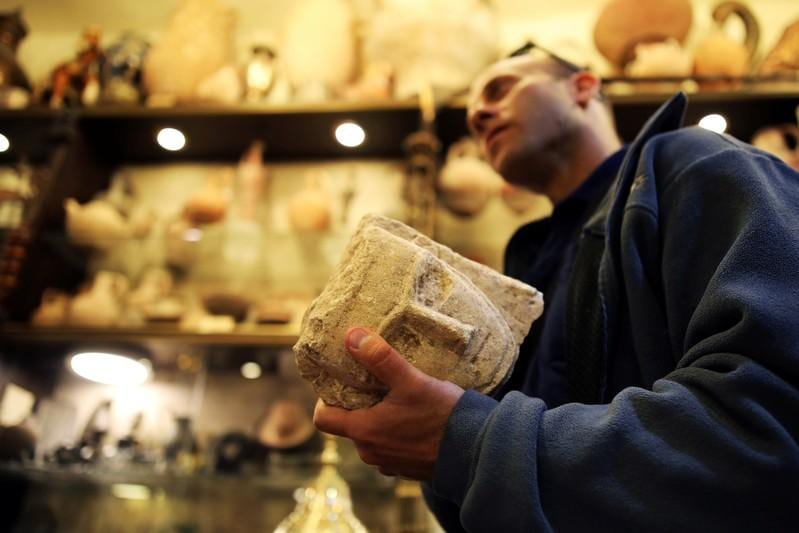 By Rinat Harash and Ari Rabinovitch

QUMRAN, West Bank (Reuters) - In the cliffs high above the Dead Sea archaeologists chip away with pick axes, hoping to repeat one of the most sensational discoveries of the last hundred years - the finding of the Dead Sea Scrolls.

The scrolls, a collection of manuscripts, some more than 2,000 years old, were first found in 1947 by local Bedouin in the area of Qumran, about 20 km east of Jerusalem.

They gave insight into Jewish society and religion before and after the time of Jesus, and spurred a decade of exploration, before the search fizzled.

Recent finds have stirred fresh excitement however, and archaeologists are probing higher and deeper than before. Hundreds of caves remain unexcavated and the experts are racing against antiquities robbers.

"In the last few years we noticed new pieces of scrolls and parchments arrive on the black market," said Oren Gutfeld, an archaeologist at Hebrew University in Jerusalem.

"It drove us to return to the caves," he said, sitting at the entrance of a cliffside grotto known to his team as "52B".

In 2017 his team discovered remains of storage jugs in a previously-unexcavated cave at Qumran, though any scrolls they may have held were missing.

At about 200 meters (656 ft) above the level of the Dead Sea, 52B is higher than where the scrolls were found in the 1950s, which may or may not have made it an ideal hiding place.

Towards the back of the cave is a narrow burrow, packed with debris from centuries of wind and flash floods, that when cleared could extend about 10 meters. Volunteers sift through buckets of dirt.

"People thought there was nothing left to find ... there just wasn't incentive to do this," said Randall Price, a professor at Liberty University, a Christian campus in the United States, who helped fund the dig.

But 52B did not appear on previous surveys and could yield precious secrets, Price said.

In the narrow streets of the open-air shuk (market) of Jerusalem's Old City, Eitan Klein of the Israel Antiquities Authority stops by dealers to make sure their goods appear in an official registry and are not being traded on the black market.

Klein is deputy director of the authority's robbery prevention unit, which in late 2016 recovered a fragment of text on a piece of papyrus mentioning the word 'Jerusalem' from the 7th century B.C. that had been plundered from a cave by antiquities robbers.

Following the papyrus' discovery and other intelligence operations, Klein said "the assumption is that there are still artifacts inside the caves waiting to be found. The question is, who will discover them?"

New discoveries could also help solve the debate over who authored the Dead Sea Scrolls.

Expanding the search to further possibilities is the Copper Scroll, found in Qumran in 1952. Unlike its companions that were written on parchment or papyrus, this was a list of 64 hiding places for gold and valuables, etched on copper.

Hebrew University's Gutfeld said the treasure referred to may be from the ancient Jewish temple in Jerusalem. In 2006 he finished excavating two manmade tunnels not far from Qumran that he believes matched a description in the Copper Scroll of the so-called Valley of Shadow.

One of the tunnels, a two-meter high, shoulder-width corridor, extended 125 meters underground. No treasure was found, but Gutfeld promised to continue searching in new spots.

"I'm not a treasure hunter. I'm an archaeologist," Gutfeld said. But he added: "We hope to find any hint or relationship to what we know from the text of the Copper Scroll."