By Rami Ayyub HAIFA, Israel (Reuters) - Israel's Arab parties are set to be the largest non-ruling bloc in parliament - and could even lead the opposition - if a national unity government emerges from Tuesday's election. A surge in turnout gave the Arab-dominated Joint List 13 of the Knesset's 120 seats, making it the third-largest grouping behind Prime Minister Benjamin Netanyahu's right-wing Likud Party, with 31 seats, and Benny Gantz's centrist Blue and White, with 33 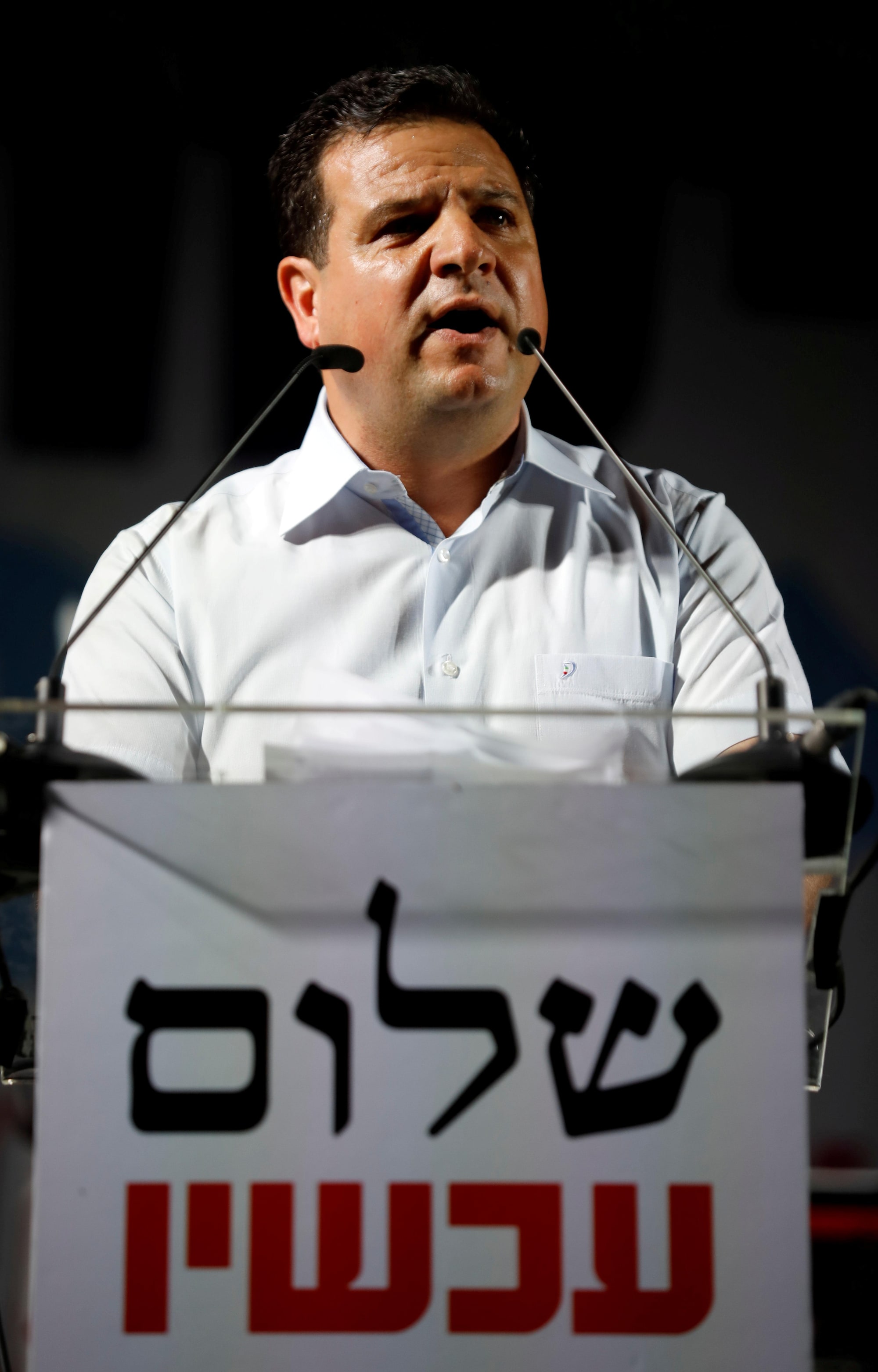 HAIFA, Israel (Reuters) - Israel's Arab parties are set to be the largest non-ruling bloc in parliament - and could even lead the opposition - if a national unity government emerges from Tuesday's election.

A surge in turnout gave the Arab-dominated Joint List 13 of the Knesset's 120 seats, making it the third-largest grouping behind Prime Minister Benjamin Netanyahu's right-wing Likud Party, with 31 seats, and Benny Gantz's centrist Blue and White, with 33.

That would make the Joint List the largest opposition grouping in parliament if a unity government takes shape, a realistic possibility even though Gantz rebuffed Netanyahu's initial invitation.

No party drawn from the 21 percent Arab minority has ever been part of an Israeli government. But if Joint List head Ayman Odeh, 44, becomes opposition leader, he would receive monthly briefings from the Mossad intelligence agency and meet visiting heads of state.

This would provide a platform to voice Arab complaints of discrimination against them and give a bigger platform to Arab parties that differ with parties drawn from the country's Jewish majority.

"It is an interesting position, never before held by someone from the Arab population. It has a lot of influence," Odeh told reporters outside his home in Haifa, a mixed Arab and Jewish city in northern Israel.

But although the Joint List will be the single biggest group, other opposition parties combined would have enough seats to block his appointment through an absolute majority vote, analysts said.

"There's no way the other parties will agree to have Ayman Odeh as head of the opposition, and grant our community recognition and legitimacy," said Aida Touma-Sliman, an Arab lawmaker from Odeh's Hadash faction.

Arab lawmakers often call for an end to Israel's occupation of the West Bank and Gaza, a Palestinian state with East Jerusalem as its capital and the dismantling of Israel's settlements in the West Bank.

The Arab community in Israel is mainly descendants of the Palestinians who remained in Israel after its creation in 1948, and some in the younger generation openly identify as Palestinian.

They make up 1.9 million of Israel's 9 million population, and often complains of discrimination in health, education and housing, living in cities such as Nazareth and Acre in the north and Bedouin towns in the southern Negev desert.

The Mossawa Center rights group says Israel's state budget often favours Jews, allocating more funds to Jewish localities and schools than to Arab ones. Some 47% of Arab citizens live in poverty, far above a national average of 18%, it says.

However, Netanyahu's Likud party counters that its 15 billion shekel ($4.19 billion) investment plan for the Arab sector during the last parliament "is the largest such commitment in Israel’s history", according to Eli Hazan, Likud's foreign affairs director.

In Tuesday's election, Odeh and his group of four Arab parties ran a united front and Arab turnout increased sharply. That helped them regain seats lost in April when they were divided and turnout plummeted.

The Joint List held up its stronger showing on Tuesday's rerun as a victory over what is described as an "unprecedented campaign of incitement against the Arab public" by Netanyahu and right-wing parties.

Netanyahu made allegations of voter fraud in Arab communities an issue in his election campaign, and sought to deploy cameras to the country's polling centres in what Arab leaders described an attempt to scare off voters. Israel's top court refused to allow cameras.

Eid Jbaili, a 55-year-old gym teacher from Haifa, said he boycotted the April election but voted on Tuesday "because my community's leaders showed they could exude unity in the face of adversity".

But Jbaili was unsure an Arab opposition leader would be able to provide anything beyond a "small symbolic win" for his community.

"We still won't be decision-makers in this country," he said.