Republican Lt. Gov. David Dewhurst halted the speech after determining that Democratic Sen. Wendy Davis had strayed off the topic when she talked about a sonogram bill passed in 2011 and how the new abortion restrictions only compounded the anti-abortion laws in Texas. 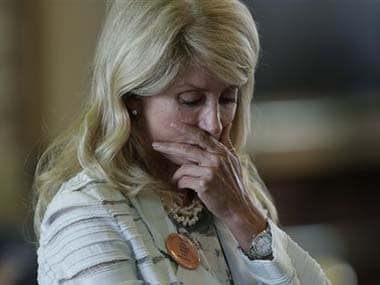 Wendy Davis reacts after she was called for a rules violation during her filibusters of an abortion bill. AP image

Democrats immediately appealed the decision and set off a heated debate over parliamentary rules.

Wearing pink tennis shoes to prepare for nearly 13 consecutive hours of standing, Davis began the day by launching into a one-woman filibuster — the use of long speeches to obstruct the passage of legislation — in an effort to block a Republican-led effort to impose stringent new abortion restrictions across the nation's second-most populous state.

Davis began her speech at 11:18 a.m. CDT (1618 GMT)Tuesday and continued until 10:03 p.m., less than two hours before the midnight deadline marking the end of the state legislature's 30-day special session of the Texas state legislature.

Rules stipulate that Davis remain standing, not lean on her desk or take any breaks — even for meals or to use the bathroom. But she must also stay on topic, and Republicans pointed out a mistake and later protested again when another lawmaker helped her with a back brace.

A Republican senator called the third point of order because of Davis' remarks on the sonogram law. Under the rules, lawmakers can vote to end a filibuster after three sustained points of order.

If signed into law, the measures would close almost every abortion clinic in Texas, a state 773 miles (1,244 kilometers) wide and 790 miles (1,271 kilometers) long with 26 million people. A woman living along the Mexico border or in West Texas would have to drive hundreds of miles to obtain an abortion if the law passes.

In her opening remarks, Davis said she wanted to "to humbly give voice to thousands of Texans" and called Republican efforts to pass the bill a "raw abuse of power."

Democrats chose Davis to lead the effort because of her background as a woman who had her first child as a teenager and went on to graduate from Harvard Law School.

In the hallway outside the Senate chamber, hundreds of women stood in line, waiting for people in the gallery to give up their seats. Women's rights supporters wore orange T-shirts to show their support for Davis, and Dewhurst reminded those in the gallery that interrupting the proceedings could result in 48 hours in jail.

Davis, tried to stay comfortable and sharp by shifting her weight from hip to hip and slowly walking around her desk while reading notes from a large binder on her desk. When a male protester stood in the Senate gallery and shouted, "Abortion is genocide," Davis continued talking uninterrupted as the man was removed by security.

Twice in the first six hours, anti-abortion lawmakers questioned Davis about the bill, presenting their arguments that it would protect women or that abortions were wrong. Davis answered their questions but did not give up control of the floor.

Davis read testimony from women and doctors who would be impacted by the changes, but who were denied the opportunity to speak in a Republican-controlled committee. During one heart-wrenching story describing a woman's difficult pregnancy, Davis choked up several times and wiped tears.

Texas is one of several states taking aim at the landmark Supreme Court decision in 1973 that made abortion legal and set off a raging debate on the issue that continues today.

North Dakota is another, and abortion rights advocates on Tuesday filed a lawsuit in federal court challenging two new laws there that impose the nation's toughest abortion restrictions. The lawsuit seeks to block a measure that would ban abortions as early as six weeks into a pregnancy, when a fetal heartbeat can first be detected.

The Texas bill would ban abortion after 20 weeks of pregnancy and force many clinics that perform the procedure to upgrade their facilities and be classified as ambulatory surgical centers. Also, doctors would be required to have admitting privileges at a hospital within 30 miles (50 kilometers) — a tall order in rural communities.

"If this passes, abortion would be virtually banned in the state of Texas, and many women could be forced to resort to dangerous and unsafe measures," said Cecile Richards, president of Planned Parenthood Action Fund and daughter of the late former Democratic Texas governor Ann Richards.