Video Volunteers: How a retired postmaster is reviving traditional agriculture in Madhya Pradesh 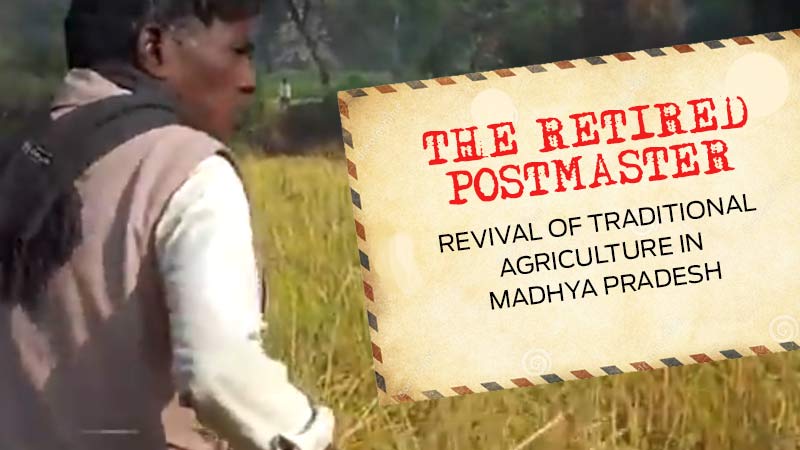 The green revolution in the 1960s was the introduction of capital-intensive mechanised farming using engineered seeds and replacing organic methods by intensive methods using tractors, pesticides and chemical fertilisers. Promoted as a way to end hunger, green revolution today stand debunked as a failed experiment that caused untold harm to the environment and as directly responsible for the indebtedness of farmers causing mass farmer suicides in India. Babulal says, “In Madhya Pradesh maximum farmer suicides are related to the soya bean crop. The reason for this is soya bean is a completely capital intensive crop which is geared towards the market. Farmer suicide is unheard of in traditional organic farming”.

Babulal’s organisation, Sarjana Social Cultural and Political Forum,  caters primarily to the needs of two Adivasi areas in Santa District: Pachmari and Machgaon in Madhya Pradesh.  It promotes traditional agriculture in Madhya Pradesh’s 30 villages out of the 84 villages in the block. This initiative was started at a dire time when the farmers of these villages were in debt trap owing to expensive genetically modified and high-yield varieties of seeds which were expensive themselves and needed expensive inputs like pesticides and chemical fertilisers.

Organic farming works simply because the use of a variety of indigenous seeds which are suited to local climatic conditions like drought help reduce harvest failures. Babulal’s organisation has done experiments to demonstrate how traditional agriculture in Madhya Pradesh benefits farmers. They planted hybrid paddy seeds and alongside an indigenous variety. The indigenous variety, Nevali, was ready for harvest in 90 days and required much less water. The high yield variety (IR36) took 120 days and needed thrice the amount of water.

Today Madhya Pradesh has emerged as the largest soya bean producer in India, accounting for over 65% of the country’s total production. The cash crop changed the lives of millions of farmers who stopped growing rice and wheat. This dependence has proved disastrous for many. According to researchers like Vandana Shiva, Monsanto seeds are directly responsible for over 270,000 farmer suicides in India. And yet it remains upon individuals like Babulal Dahiya to help farmers while the government blindly promotes unsustainable farming that is costing so many lives. It is time for the administration to wake up to the benefits of traditional farming and promote it aggressively for a food secure future.