Colonel Muammar Gaddafi, was  the President of Libya, and the longest-serving leader in the Arab world (1969 - 2011) In February 2011 the Libyan people rose up against his rule, inspired by the Arab uprisings in Tunisia and Egypt. A series of peaceful protests were met with military force by the Gaddafi regime. Gaddafi was killed in Sirte by the National Transitional Council forces on October 20, 2011.  The protests escalated into an uprising that spread across the country, with forces opposing Gaddafi establishing a government based in Benghazi named the National Transitional Council.

The United Nations Security Council passed an initial resolution freezing the assets of Gaddafi and ten members of his inner circle, and an arrest warrant for Gaddafi was issued on 27 June.

In early March, Gaddafi's forces rallied, pushed eastwards and re-took several coastal cities before attacking Benghazi. A further U.N. resolution authorized member states to establish and enforce a no-fly zone over Libya. The Gaddafi government then announced a ceasefire, but failed to uphold it. In August, rebel forces took most of their lost territory and captured Tripoli, leading to the arrest of Gaddafi's son and heir-apparent, Saif al-Islam. 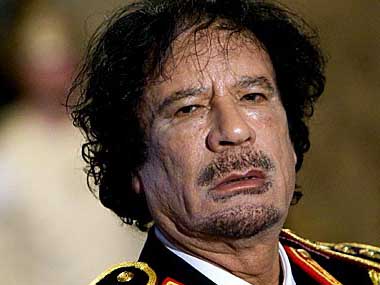 Gaddafi has been President of Libya since 1969, after he led a bloodless coup of junior army officers, deposing then leader King Idris who was in Turkey for medical treatment. One of the first things he did after gaining power was to dispense with the Christian calendar and adopt a Muslim based calendar which begins from the year of birth of the prophet Mohammed. Government correspondence and newspapers accordingly listed the year 1969 as 1369. Also, the Roman months were changed to Arab ones. For example, August, named after Augustus Caesar, was renamed Hannibal, and July, from Julius Caesar, was called Nasser, after Gamal Abdel Nasser. (More on Wikipedia)

Known for his flamboyant dress-sense and gun-toting female body guards, the Libyan leader is also considered a skilled political operator. Gaddafi laid out his political philosophy in the 1970s in his Green Book, which charted a home-grown alternative to both socialism and capitalism, combined with aspects of Islam. In 1977 he invented a system called the "Jamahiriya" or "state of the masses", in which power is meant to be held by thousands of "peoples' committees". In the 80's, Gaddafi was influenced by the idea of Arab superiority and declared war in Sudan, after its President turned down an offer to merge Libya with Sudan, and signed a peace agreement with Sudanese Christians. However Libya suffered a humiliating loss, losing one tenth of its army (7,500 troops) and 1.5 billion dollars worth of military equipment. Chad lost 1,000 troops.

Gaddafi supported terrorist organizations that held anti-Western sympathies around the world. He is believed to have provided support to terrorist groups in the Philippines, including the New People’s Army of the Communist Party of the Philippines and the Moro Islamic Liberation Front. In Indonesia the Organisasi Papua Merdeka is believed to have been a Libyan backed militant group.

In April 1984 Libyan diplomats in Britain shot at 11 people protesting the execution of two Libyan dissidents, and killed Yvonne Fletcher, a British policewoman. The incident led to the cessation of diplomatic relations between the United Kingdom and Libya for over a decade.

However the most infamous incident of terror connected to Libyan support is the Lockerbie bombing of 1988, when a terrorist bomb exploded on board Pan Am flight 103, destroying the aircraft over the Scottish town of Lockerbie and killing 270 people. Abdelbaset al-Megrahi was jailed in 2001 for the attack. Gaddafi accepted Libya's responsibility for the Lockerbie bombing and paid compensation to the victims' families in 2003. However, he has never admitted personally giving the order for the attack.