India's largest passenger car company, Maruti Suzuki, has been struggling for the last 4 months with a workers' strike, that has brought the production at the company's Manesar plant to a halt.

At the centre of this tussle between the management and Maruti Suzuki and its workers is the latter's demand for recognition of a new trade union — Maruti Suzuki Employees Union. 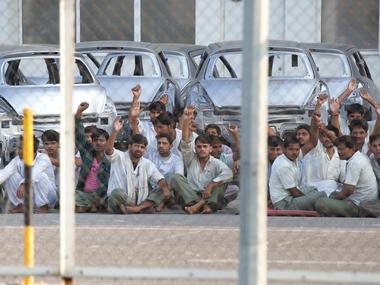 While the management maintained a tough stand on the strike, workers refused to budge. Over the last three months the management has been hiring new workers constantly. In September an agreement was reached between the two parties whereby, the company had asked the employees to sign a good conduct bond before entering the factory premises, which the latter refused to do.

Following this, the management filed a case against the protesting workers, accusing them of causing trouble at the factory and harassing the loyal workers of the company. In its plea the company asked the court to declare the strike illegal.

The Punjab and Haryana High Court on Thursday issued directions for smooth functioning of the Manesar plant. The court asked the striking workers to leave the factory premises and barred them from holding any strike within 100 meter area around the factory premises.

The workers have, however, continued with their strike, supported by other unions in Manesar.

Due to the strike, the Haryana government has suffered a loss of Rs 350 crore till date and Maruti Suzuki India has taken a hit of over Rs 1500 crore.