When America sneezes, the world catches a cold. The saying cannot be more true for global stock markets that have plunged  deep into red after an overnight crash on the US bourses.

In its biggest decline since September 29, 2008, when stocks dropped 778 points - two weeks after the fall of Lehman Brothers, the Dow Jones industrial average today shed over 500 points, following which a stock market crash has been witnessed across the world. Experts said all  investment gains made in 2011 have been negated. 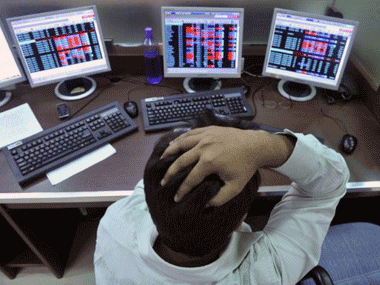 Concern the global economy may relapse into a recession has driven investors out of stocks and into the relative safety of Treasuries. Reuters

World stock markets fell for the eighth straight session on Friday to the lowest since late 2010. The crisis has been sparked off by sovereign debt uncertainty in Europe and  weak economic recovery in US.  The Dow Jones and the S&P lost more than 4 percent each, while the Nasdaq fell  over  5 percent.

An overnight panic triggered the worst sell-off on Wall Street since the global financial crisis, after which investors in Asia slashed positions in equities and commodities and scrambled for the safety of cash and government bonds.

And India was not far behind. The stock benchmark BSE Sensex had crashed over 700 points to slip below 17,000-point level for the first time since June 2010 though it recovered later. Negative trends in Asian and European markets further added to the selling pressure on Indian bourses.

Though Indian equity markets recovered some of the lost ground and closed 371 points lower at 17,321, Taiwan, Japan, Hong Kong were among the worst sufferers. While, the Shanghai market was down  over 2 percent, Japan's Nikkei index fell  nearly 4 percent and Hong Kong's Hang Seng index declined by over 4 percent. The Taiwan market fell by nearly 6 per cent.

Why did the stock market crash?

The US averted a debt default earlier this week, but the economy never really recovered. The sharp fall in the Dow Index can be attributed to many domestic and global cues.  Analysts attributed the plunge to investor fear about the US economy stemming from the Congressional debt deal, Europe's debt problems and troubling economic data.

India, however, is peripheral to the global mood. Lowering of growth rate and high inflation have had a larger impact on the Indian market rather than the slowing global markets.  However, since Indian equity markets are  excessively exposed to foreign institutional investors, they are likely to get dragged down too, but not for too long.