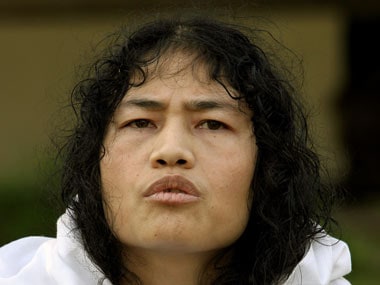 Born Irom Chanu Sharmila. Also known as the Iron lady of Manipur, Sharmila is an activist and a poet who has been on a 10-year fast demanding the repeal of the Armed Forces Special Powers Act (AFSPA) in North Eastern India that has invested the Army with unquestioned power, resulting in human rights violations in the region. The Act allows soldiers to detain anyone indefinitely on mere suspicion of being a rebel. She is currently under judicial custody, being kept alive by being forcibly nose-fed on a solution of vitamins and other nutrients. She was arrested on charges of "attempt to commit suicide", just three days after her hunger strike began on 2 November 2000.

The incident that started her on a hunger strike took place at Malom, where she had gone to attend a meeting to plan a peace rally. There she saw dead bodies on the front page of the newspapers, which led her to choose the Gandhian route to resolution, because “there was no other means to stop further violations by the armed forces against innocent people. I thought then, that the peace rally would be meaningless for me. Unless I were to do something to change the situation.”

Largely out of mainstream news, Sharmila came back to light after another Gandhian, Anna Hazare's fast forced the government to concede to his demands within 12 days of his fast, where Sharmila's 10-year silent struggle has has faded into the background.

She has the support of many international organisaShe was awarded the Gwangju Prize for Human Rights in 2007 and the Rabindranath peace award in 2010.