Ganesh Chaturthi which celebrates Lord Ganesha, falls on September 1 this year (2011). Celebrated mainly in the states of Maharashtra, Karnataka, Tamil Nadu, Goa and Andra Pradesh, the festival lasts 11 days and devotees believe that the essence of Lord Ganesha descends to earth and remains here for the entire duration of the festival. The date of the festival corresponds to the fourth day of the waxing moon period and generally falls between 20 August and 15 September.

Ganesh Chaturthi starts with the installation of elaborate Ganesh statues in houses. There are also public statues placed on specially erected and highly decorated 'mandapas' or pandals in every locality. The pandals are erected by the people or a specific society or locality or group by collecting monetary contributions. 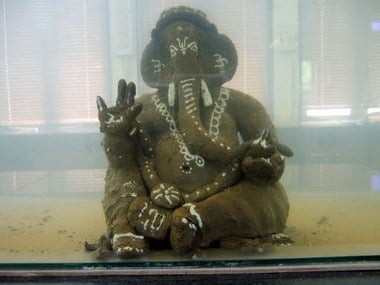 A Ganesh idol in Mumbai - AFP

The priest, usually clad in red silk dhoti and shawl, then symbolically invokes life into the statue by chanting mantras. This ritual is the Pranapratishhtha. This is followed by the Shhodashopachara (16 ways of paying tribute). Coconut, jaggery, 21 modakas, 21 durva (trefoil) blades of grass and red flowers are offered. The statue is anointed with red unguent, typically made of Kumkum and Sandalwood paste . Throughout the ceremony, Vedic hymns from the Rig Veda, the Ganapati Atharva Shirsha Upanishad, and the Ganesha stotra from the Narada Purana are chanted. (read more on Wikipedia)

For 10 days, from Bhadrapad Shudh Chaturthi to the Ananta Chaturdashi, Ganesha is worshipped. On the 11th day, Ganesha idols are paraded through the streets complete with dancing and singing, to be immersed in a river or the sea. The procession is meant to be a grand farewell to Ganesh who after having inhabited the earth for the duration of the festival, will journey towards his abode in Kailash, taking all of mans misfortunes away with him.

In recent years the immersion of thousands of statues has created a worrying environmental impact, since the plaster of Paris that is used to create the statues releases toxic elements into the water and kills off massive amounts of marine life.  Traditionally, the Ganesh icon was sculpted out of earth taken from nearby one’s home. After worshipping the divinity in this earth icon, it was returned back to the Earth by immersing it in a nearby water body. This cycle represented the cycle of creation and dissolution in Nature.

However, as the production of Ganesh icons on a commercial basis grew, the earthen or natural clay has been replaced by Plaster of Paris.