On May 23, 2019, when the results for the Lok Sabha elections were declared, it was the first time in 48 years that an incumbent prime minister heading a majority government came back with a majority. Narendra Modi was elected by the republic of India as its Prime Minister for the second consecutive term. rnIn 2014, when he was declared the Bharatiya Janata Party (BJP) prime ministerial candidate, BJP won 282 seats in the Lok Sabha and it was the first time in three decades that any party had an earned an absolute majority.rnrnBorn on 17 September 1950 to Heeraben and Damodardas Modi in Vadnagar, Mehsana district of Gujarat. Before assuming the office of Prime Minister of India, Narendra Modi had served as the Chief Minister (CM) of his home State Gujarat for four consecutive terms. He first became the Chief Minister of Gujarat in 2001.rnrnAccording to his official website, at the age of 17, he left his home and travelled across India. In 1972, he joined the Rashtriya Swayamsevak Sangh (RSS) and in 1974 he participated in Navnirman Movement that was launched against corruption in Gujarat. Narendra Modi also participated in the anti-emergency movement in 1975 after the national emergency was imposed by then Prime Minister Indira Gandhi.rnrnIn 1978 Narendra Modi got his first official responsibility in RSS when he was appointed ‘Vibhag Pracharak’. In 1987 he joined Bharatiya Janata Party (BJP) as Organization Secretary of Gujarat Unit and just seven years later, he became BJP’s National Secretary and moved to Delhi. In 1998 he was appointed BJP’s National General Secretary (Organization) and then the Chief Minister of Gujarat on October 07, 2001.rnA postgraduate in Political Science from Gujarat University, Modi was appreciated for his ‘Development Model’ in Gujarat during his 14 year long tenure (2001-2014) as chief minister of the state. During Modi’s tenure, Gujarat became a “preferred destination for investment” because of its “business-friendly policies”.rnrnIn 2013 a delegation of parliamentarians and businessmen from the United States of America (USA) visited Gujarat. The 18-member- delegation, led by Republican Congressmen from Illinois Aaron Schock accepted that people in the USA were keen to work with Gujarat as ‘they were impressed by the way the state has facilitated investment’.rnAs reported by the Economic Times during the ‘Vibrant Gujarat Summit’ held in 2015, United Nations Secretary-General Ban Ki-moon to World Bank Chairman Jim Yong Kim appreciated Modi’s development model and called him the ‘driving force’ behind India's phenomenal growth story. rnApart from giving big push to economic development through big infrastructure projects and investments, women empowerment and youth welfare was another area that was of major importance for Gujarat government under Narendra Modi’s chief ministership.rnrnAfter assuming the office of Prime Minister of India, he focused on ensuring basic amenities to people. Pradhan Mantri Jan Dhan Yojana (PMJDY) launched by Modi on August 15, 2014, was a financial inclusion program that aimed at ensuring bank account to every household and was targeted at ensuring affordable access to financial services such as bank accounts, remittances, credit, insurance and pensions to those people who were out of the formal banking net. Pradhan Mantri Ujjwala Yojana (PMUY) was launched to provide LPG connections to women of BPL families. Apart from this several other schemes like skill development program, Mudra Yojna (providing easy loans to small business) Swachh Bharat Abhiyan, to name few, were all meant to ensure basic amenities to people who were devoid of these basic amenities even after more than seven decades of independence. rnThese programs not only led to tangible changes in terms of new infrastructure but also led to massive behavioural changes. Like Swachh Bharat Abhiyan did not limit itself with building toilets and making the country open defecation free (ODF). It also led to major awareness among people about the benefits of sanitation and cleanliness.rnAnd to ensure these behavioural changes, Narendra Modi started communicating with people directly through different conventional media and new media channels. On the one hand, through his monthly radio broadcast program ‘Mann Ki Baat’, Narendra Modi attempted to reach the remotest areas of the country and on the other hand, he used his massive presence on social media platforms like Twitter and Facebook to enter each and every household with his messaging on the efforts that people of this country have to make to realize the dream that is 'New India'.rnOn March 31, while interacting with lakhs of people at more than 500 locations across the country through video conferencing, under the "Main Bhi Chowkidar" campaign, Modi had said that he spent five years (of his first term as Prime Minister) in fulfilling the country's requirements and his next five years will be focused on addressing the country’s aspirations.rn 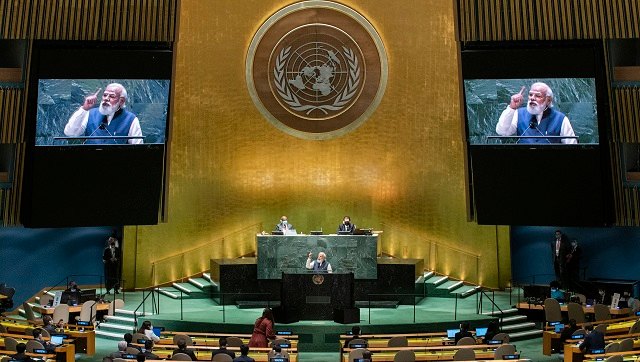 Modi at UNGA: PM targets Pakistan and China, but not by name; slams nations with 'regressive thinking'