It is not often that the swearing-in of a state chief minister makes for a big national headline. But it did when Manohar Parrikar, a sanghchalak from Rashtriya Swayamsevak Sangh (RSS) and a BJP MLA, became the tenth chief minister of Goa for the first time on 24 October 2000.

The reason: Parrikar was the first CM in Indian politics, who was an engineering graduate from the prestigious Indian Institute of Technology (IIT).

Born on 13 December, 1955 to a Gaud Saraswat Brahmin family of grocers in the town of Mapusa in Portuguese-held Goa, Parrikar rose to be India’s Defence Minister (2014—2017), besides being four-time chief minister of the state. And a popular one at that with a pan-India fan base, both as the Union minister and as the chief minister of Goa.

He’s partly credited with carrying out cross-border surgical strikes along the country's eastern and western borders.

Parrikar studied at Loyola High School, Margao and graduated in Metallurgical Engineering from IIT, Bombay in 1978. He had joined RSS as a school student, and became head of the Mapusa shakha at the age of 26. As a sanghchalak, he actively promoted Ramjanmabhoomi movement in Goa.

Given his success as Goa chief minister, it is surprising that he had an unsuccessful electoral debut. He was defeated by Congress candidate Harish Zantye in the 1991 Lok Sabha election, but in 1994, he was elected to the second Legislative assembly of Goa as a representative from Panaji constituency. By 1999, he rose to become the Leader of Opposition in the state assembly.

With no ego hassle, low-profile Parrikar was known for his simple and down-to-earth life style. People of Goa remember him for his scooter rides to Mantralaya or market, having tea at roadside tea-stalls or standing in a queue at weddings to have his plate. His philosophy was that by having tea at footpaths, one got in touch with the ground realities.

Parrikar is considered the cornerstone of BJP’s rise in Goa, from a party whose candidates routinely lost poll deposit fees in the late 1980s and early 1990s, to a powerful one which won a simple majority in 2012.

In the 1990s, when Goa had witnessed 13 CMs in 10 years, Parrikar began his first innings as CM in 2000, after he staged an internal coup against a coalition government of Congress rebels supported by his BJP MLAs, when then CM Francisco Sardinha was in Australia. He was re-elected as CM for the second term on 5 June, 2002, but his government was reduced to a minority after four BJP MLAs resigned from the House. However, Parrikar proved his majority next month.

In 2007, Parrikar -led BJP was defeated in assembly election by the Congress, led by Digambar Kamat, a former BJP leader. However, Parikkar was back as CM in 2012, after BJP and allies won 24 seats.

Parrikar was the first and only leader within the BJP, who had proposed the name of Narendra Modi as the PM nominee during BJP’s convention in Goa in 2013. In the 2014 Lok Sabha election, the BJP won both the seats in Goa, and after Modi became the PM, he persuaded Parrikar to join his cabinet as defence minister, which the latter continued till March 2017. He formally entered national politics via a Rajya Sabha seat from Uttar Pradesh.

Parrikar took oath as Goa CM for the fourth-term on 14 March 2017. The circumstances were interesting that forced Parrikar to leave Delhi for Goa. After the announcement of the assembly poll results for Goa, the Maharashtrawadi Gomantak Party (MGP) –one of the allies of the Goa BJP – put a condition to support the BJP only if Parrikar, who was then the defence minister, was brought back to the state as CM.

In personal life, Parrikar faced tragedy when his wife expired in 2001 a few months after he had become the Goa CM. Besides discharging the responsibility of a CM, he brought up his two sons.

During March to June 2018, he underwent treatment in the USA for pancreatic cancer. He came back to Goa, took charge, but was again admitted at AIIMS in New Delhi in September 2018. He died at the age of 63 at his residence in Panaji on 17 March 2019.

Parrikar too had his share of controversies. In 2001, his government turned over 51 government primary schools in rural areas to Sangh Parivar’s Vidya Bharti, which invited criticism from a section of educationists. He drew criticism for approving a junket of Rs 89 lakh for six MLAs from his party, including three ministers, to attend the 2014 FIFA World Cup in Brazil.

In 2016, he had remarked that going to Pakistan was same as ‘going to hell’, which received widespread criticism.

Despite these controversies, he was loved across party line and there is no doubt that Parrikar will be remembered as Goa’s most successful politician ever, who turned around Goa from a drug and crime hub to an international tourist destination. 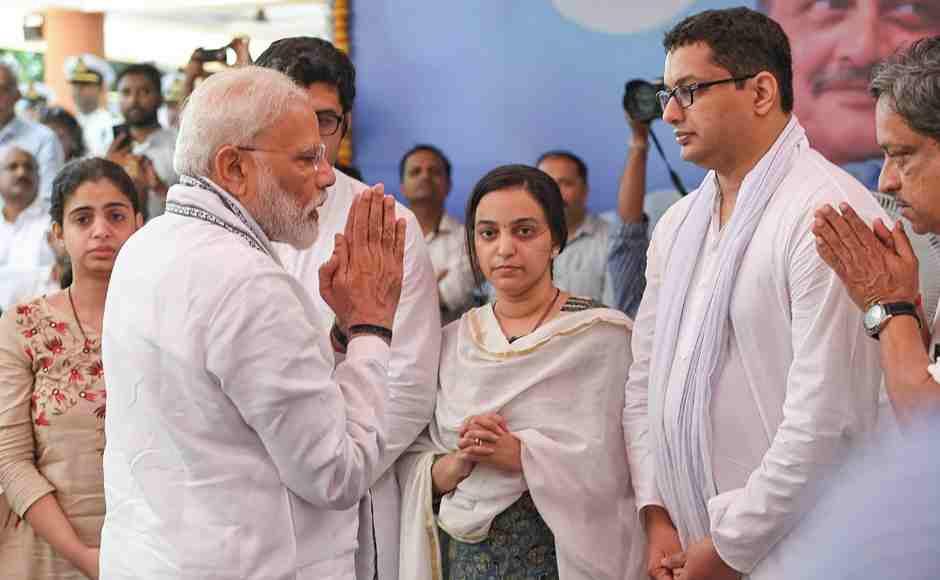