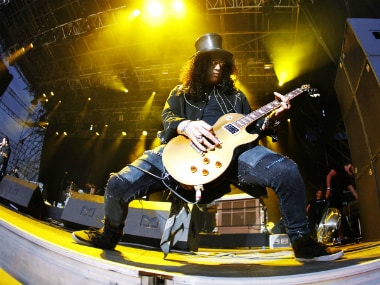 Gisele Marie, a Muslim woman and professional heavy metal musician, plays her Gibson Flying V electric guitar during a concert in Sao Paulo December 16, 2014. Based in Sao Paulo, Marie, 42, is the granddaughter of German Catholics, and converted to Islam several months after her father passed away in 2009. Marie, who wears the Burka, has been fronting her brothers' heavy metal band "Spectrus" since 2012. "People do not expect to see a Muslim woman who uses a Burqa, practices the religion properly and is a professional guitarist who plays in a Heavy Metal band, so many people are shocked by it. But other people are curious and find it interesting, and others think that it is cool, but definitely, many people are shocked," said Marie. Picture taken December 16, 2014. REUTERS/Nacho Doce TPX IMAGES OF THE DAY - RTX1RYHB

Percy Sledge kneels as he performs "When a Man Loves a Woman" along with the Muscle Shoals Rhythm Section at the Musicians Hall. AP

(L) Mumbai Flute maestro, Rakesh Chaurasia and other musicians perform in a music concert to pay tribute to the 26/11 Mumbai Terror Attack martyrs at Gateway of India in Mumbai on Wednesday. (R) Mumbai All-India Anti-Terrorist Front Chairman MS Bitta paying tributes to the victims of 26/11 Mumbai terror attacks on the sixth anniversary of the gruesome incident, in Mumbai on Wednesday. PTI

Mumbai Maninderjeet Singh Bitta, chairman of All-India Anti-Terrorist Front greets musicians at a music concert to pay tribute to the 26/11 Mumbai Terror Attack martyrs at Gateway of India in Mumbai on Wednesday. PTI

Russian cellist and composer Mstislav Rostropovich is filmed by media as he plays Bach next to the Berlin wall at Checkpoint Charlie, in this November 12, 1989 file photo. Rostropovich, who became an international symbol of the fight for artistic freedom under Soviet rule, died on Friday at the age of 80 a spokeswoman for Russia's state culture agency said. Russian news agencies quoted a source close to the musician as saying that Rostropovich had died in a Moscow hospital after a long illness. REUTERS/ullstein - Succo (GERMANY) B/W ONLY BEST QUALITY AVAILABLE - RTR1P3C6